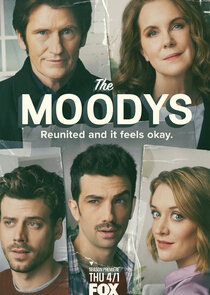 After a brief reconciliation, Dan and Cora  break up again, sending him back home to his parents' house. Ann then forces Dan into an unwanted therapy session with her friend, Grace. Meanwhile, Sean Sr. proudly sends Sean Jr. out on his first solo job to fix an HVAC unit, which the younger Moody promptly ditches for a new business opportunity with Cousin Marco. Then, Bridget goes rock climbing with her ex-boyfriend from college, Nick, and his new girlfriend.

The Moodys follows a tight-knit, but slightly dysfunctional family of five, all of whom gather in their hometown of Chicago for the "perfect" holiday. From break-ups to arrests to sharing one bathroom, each family member is packing his/her own eccentricities and hiding secrets from the others – as if the holidays were all about carols and eggnog!