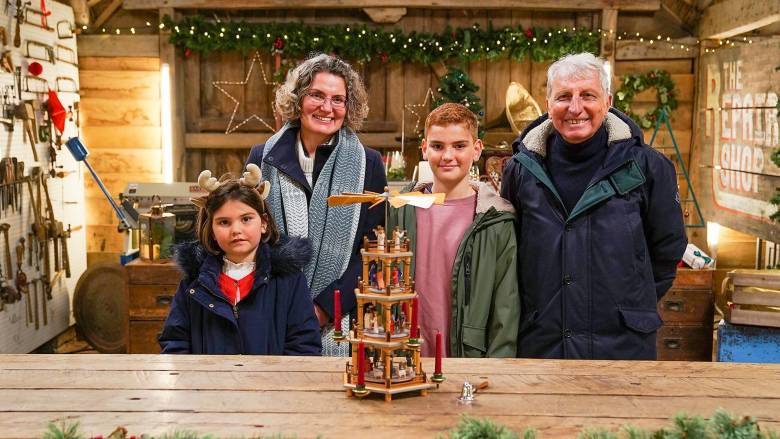 Christmas has arrived at The Repair Shop, where its team of passionate and skilled craftspeople set to work repairing and rescuing four beloved festive treasures.

Maureen Donnachie and her husband John arrive with a very special present that Father Christmas brought Maureen in 1950. As a young child of two, Maureen was diagnosed with polio and was placed into quarantine for several months before being released just before Christmas. The disease left her unable to walk and she received a very special present, a mechanical walking ‘Susie’ doll. While Maureen slowly learned to walk again, Susie was there encouraging her every step of the way. Seventy years later, Susie can no longer walk, her mechanism has seized and she is looking the worse for wear, while Maureen is now suffering from post-polio syndrome, a little-known condition that causes the symptoms of polio to return many years after the original infection. As Maureen is losing the use of her legs again, she would love to see Susie returned to full working and walking order. It’s a Christmas mission for the bear ladies Amanda Middleditch and Julie Tatchell, with the mechanical help of horologist Steve Fletcher.

A multi-layered traditional wooden Nativity scene originally brought in by Sophie Harrison has metal worker Dom and wood expert Will in a bit of a spin. This ornament has been a feature of family Christmases for as long as Sophie can remember, a gift from her French grandfather Claude to her mum Marie-Claude. Sophie hopes that Dom and Will can get this festive ornament turning again so she can share it this Christmas with her father and her own children.

The next item through the barn doors has supplied the soundtrack to Christmases past for several generations of a West Country farming community. Mother and daughter Jane and Amy Price have brought in a 100-year-old harmonium pump organ that belonged to their father and grandfather, Ronald Frost. Every Christmas at the family dairy farm in Somerset, Ronald would manhandle the harmonium onto the back of a farm trailer pulled by a tractor and head into the village accompanied by farm workers, villagers and a fair few tankards of cider singing Christmas carols. On hand to get this ancient instrument ready for future Christmases is organ expert David Burville with help from leather expert Suzie Fletcher.

Finally, a toy that has travelled thousands of miles in its lifetime, but which now needs the electronic know-how of Mark Stuckey to get it back on track. This ageing toy train set was once the centrepiece of a Christmas window display in a grocer’s shop in 1960s Kenya. Kids would come from miles around to watch the train, but two young boys were lucky enough to be given the train set once Christmas was over – the shop owner’s son Deepak Parmer and his cousin Nilesh. This treasured toy came with the boys when they moved to the UK with their families in the early 70s and has stayed with Deepak ever since, even though it hasn’t worked for years.

Secret Santa has again challenged every expert to create a gift from scratch for one of their barn mates. As secret plans are made in each nook and cranny of the barn, inspired creations begin to emerge, including a gingerbread replica of the Repair Shop.

The Repair Shop is a workshop of dreams, where broken or damaged cherished family heirlooms are brought back to life.

Furniture restorers, horologists, metal workers, ceramicists, upholsterers and all manner of skilled craftsmen and women have been brought together to work in one extraordinary space, restoring much-loved possessions to their former glory.

Many of these items have incredible stories behind them and a unique place in history: from an accordion played in the Blitz by a woman who is now in her 90s, to a beautifully crafted clock made by a father who was completely blind; a Pinball machine that is currently being used as a kitchen counter, and a Davenport desk with its trademark fake drawers which fooled burglars – and their crowbar.

The Repair Shop is an antidote to our throwaway culture and shines a light on the wonderful treasures to be found in homes across the country.