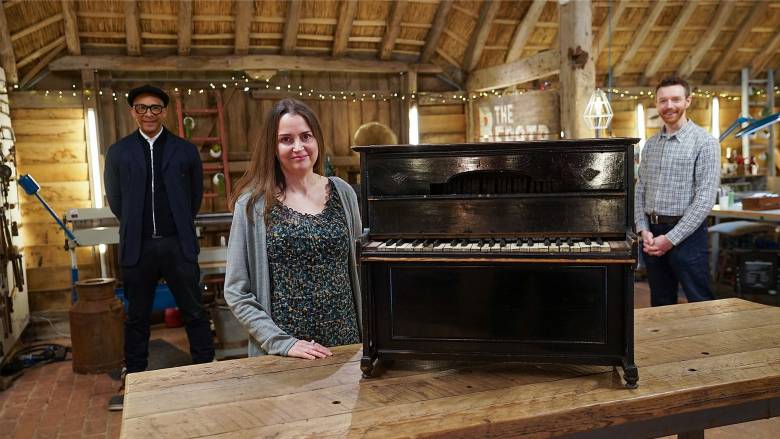 Jay Blades and the team bring three treasured family heirlooms, and the memories they hold, back to life.

First to arrive at the barn are Judith Holliman and her son James. They have brought a dear old friend – a stuffed owl called Wol. Judith clearly remembers him peeking out of her Christmas stocking when she was just a few years old, and they have been inseparable ever since. He was a gift from her beloved grandmother, who helped to raise her, and Wol is constant reminder of her grandmother’s love. But the decades of hugs and kisses have rather worn out Wol, and he could really do with the expert care of bear ladies Amanda and Julie.

Musical maestro David Burville welcomes Kathryn Freeman from Hertfordshire. He is excited to get his healing hands on her family’s miniature piano, which is now in a sorry state. Kathryn grew up with five older sisters, and this pint-sized piano provided hours of entertainment for them all. However, after years of enthusiastic playing, it is far from tuneful. Several hammers and tone bars are missing, numerous keys are broken, and the exterior is faded and chipped.

And Moonis Alam from London comes to see horologist Steve Fletcher, in the hope that Steve can bring his family’s wall clock back to life again. The clock bears a scar that tells a compelling tale of war and a rather narrow escape during the Bangladeshi liberation in the early 1970s. It signifies a brave Bangladeshi family who made a fresh start in the UK, and Moonis would love to hear it tick and chime once again.

The Repair Shop is a workshop of dreams, where broken or damaged cherished family heirlooms are brought back to life.

Furniture restorers, horologists, metal workers, ceramicists, upholsterers and all manner of skilled craftsmen and women have been brought together to work in one extraordinary space, restoring much-loved possessions to their former glory.

Many of these items have incredible stories behind them and a unique place in history: from an accordion played in the Blitz by a woman who is now in her 90s, to a beautifully crafted clock made by a father who was completely blind; a Pinball machine that is currently being used as a kitchen counter, and a Davenport desk with its trademark fake drawers which fooled burglars – and their crowbar.

The Repair Shop is an antidote to our throwaway culture and shines a light on the wonderful treasures to be found in homes across the country.