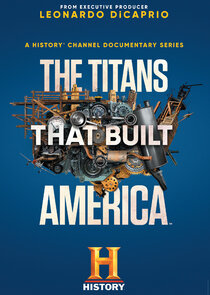 United They Stand: Just as the United States emerges from the Great Depression, Germany starts World War II in Europe and Japan attacks Pearl Harbor. The U.S. needs to build a vast war machine. Now, the same President who once vilified the Titans must ask them to set aside their own self-interests and join forces… to defeat the greatest evil the world has ever seen. With millions of lives at stake, the Titans must build the Arsenal of Democracy–to save the free world.

The Titans That Built America chronicles the incredible rise and fierce rivalries of industrial heavy hitters William Boeing, Walter Chrysler, JP Morgan Jr, and Pierre Du Pont. The ruthless, innovative and cunning titans battled each other—and FDR—to create entirely new industries at a time when the country was in absolute peril.  The Great Depression ravaged not only the economy, but also the American way of life.  Out of that rubble, this new age of robber barons emerges to once again help lift America to new heights.  From revolutionizing the automobile and erecting monuments and skyscrapers, to conquering human flight and fueling the American victory in World War II, they show that fortune favors the bold and together they not only resurrect the nation in a time of need, but ultimately band together to help defeat our country's greatest enemy.