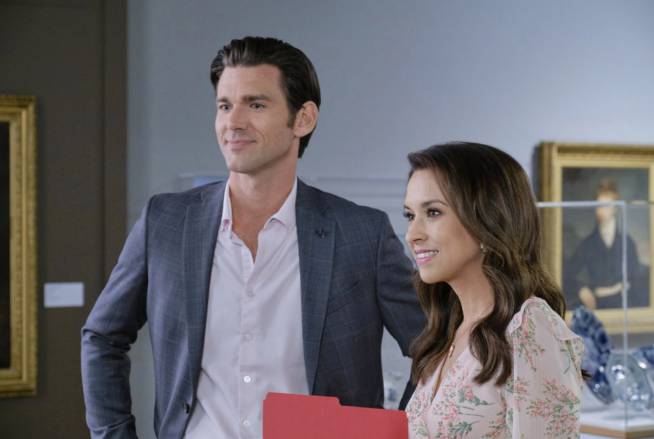 The first installment of a crossover trilogy, the movie also stars Kevin McGarry (“When Calls the Heart,” “Heartland”). Avery (Chabert), Emma (Reeser) and Tracy (Sweeney) are three close, but far-flung college friends who reunite in different cities every year to go antiquing. During a visit to San Francisco, they discover an extraordinary, antique lace wedding veil with a legend – it is said that whoever possesses the veil will find their true love. The friends agree to purchase the veil together and pass it along to each other to test whether or not the legend is true.

Romantic, curator Avery is the first to take possession and very soon after meets a handsome stranger, Peter (McGarry). As they spend a carefree day together at a local museum, they share some uncanny coincidences that have Avery wondering if it’s fate. When a misunderstanding leads Peter to give her the cold-shoulder, Avery resolves to put him out of her mind…only for him to
show up at her job back in Boston.

It turns out that Peter is from a very well-known philanthropic family and the newest board member at the museum where she works. When they uncover a long-lost painting from a 19th century Italian master, Peter works closely with Avery on a special gala to unveil its restoration. As the project brings the pair closer and they start to clear the air, they find the coincidences they share just might be the veil, working its magic.