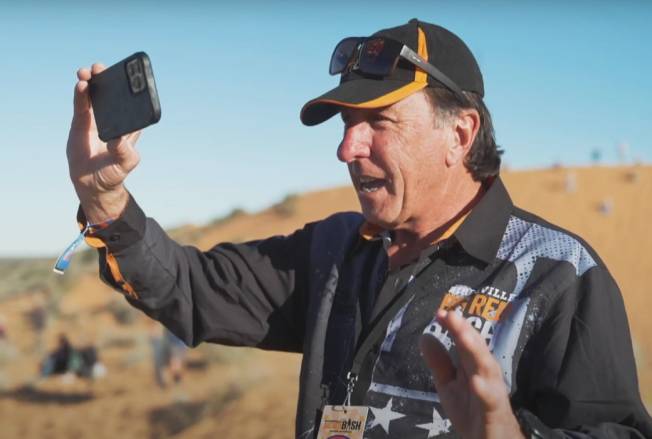 When Greg Donovan, who had worked for a Sydney insurance company for 20 years, was let go, he was in his early 50s.

“I was a suit and tie guy for my whole career,” he says. “But rather than feeling depressed I thought, well, the upside of being made redundant is you’ve got a pocket full of money.”

Greg took a big risk and funded a musical passion project in Munga-Thirri country, on the outskirts of the Simpson Desert near Birdsville, despite advice to invest his payout in superannuation.

It appeared to be a crazy idea to those working in the music business.

The Big Red Bash evolved from a fundraising ultramarathon for Type 1 Diabetes, which Greg’s son Stephen, who was diagnosed when he was a teenager, served as the impetus.

A new concept, however, emerged when Greg realised that people preferred listening to music to running 250 kilometres across the Simpson Desert.

“We thought we should put on some entertainment for the runners and volunteers who came the whole way to Birdsville,” he says. “Then people started contacting us. Nothing to do with the run: is there any way we can come and listen to this?”

Nine years after the first modest concert held atop the Big Red sand dune, many of Australia’s most well-known musicians visit Birdsville once a year.

“It was a crazy situation where a guy who had no experience just created probably one of the most iconic music festivals in the world,” says music promoter Marc Christowski.

“It’s proof yet again that a crazy person with an idea will always be able to find a place in showbiz,” says Jimmy Barnes’s manager John Watson.

Greg Donovan is now 60 and having the time of his life. “I’m my own boss, I make my own decisions and I just love what I do,” he says.