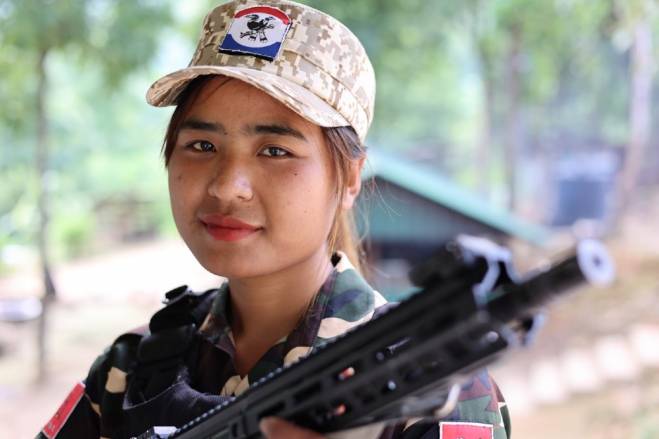 What’s Happening on Foreign Correspondent Tonight Thurs 18 August on ABC TV;  An unheard-of civil war is raging in a remote patch of jungle in northwestern Myanmar.

The people of the Chin State are locked in a deadly conflict with Myanmar’s ruthless military machine – the Tatmadaw.

As he travels across rivers and on mountain passes, he meets the people who’ve given up everything to fight Myanmar’s military junta.

Living in jungle camps and makeshift villages, students and farmers, doctors and engineers are organising into civilian defence units to defeat the Tatmadaw. The region has seen some of the heaviest fighting yet in the 18-month-long civil war.

Davis spends time with 28-year-old Cung, an agricultural worker who joined the Chin Defence Forces 18 months ago. He’s now the Commander in Chief of his battalion. Armed with little more than single-shot rifles and homemade explosives, he and his young fighters have transformed into a fearsome guerrilla force.

“This is our land, this is our place,” he says. “They can’t defeat us, the only thing they can do is burn our homes, our churches. We hunt them like wolves.”

Davis travels close to the centre of the current conflict, the strategic hillside town of Thantlang, recently taken by the Tatmadaw. Its 12000 residents have fled.

In a hilltop hospital, not far from Thantlang, a young Chin doctor, Dr Amos, and his wife Rebecca, a nurse, struggle to care for the wounded.

“The hardest bit has been getting medicines and operating equipment,” says Dr Amos.

Nearby, Davis meets 16-year-old Emily. Before Thantlang was taken, she was a high school student. Now she’s a refugee in her own country, her life on pause.

She hasn’t seen her school friends in months. “I miss them so much,” she says. “I am alone.”

The Chin people are begging for the international community to help them. They want sanctions imposed against the Tatmadaw and weapons supplies.

But with the war in Ukraine occupying the headlines, Myanmar’s bitter civil war has been overlooked.

Dr Sui Khar, a leader of the Chin, says the Chin will not give up.

This powerful film shines a light on a forgotten conflict.