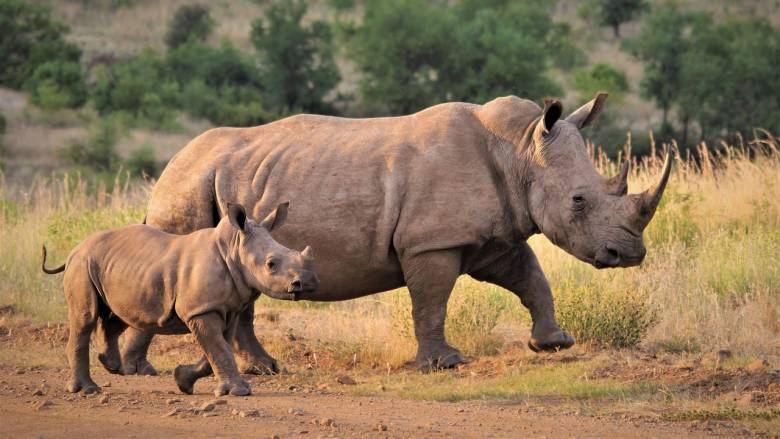 It’s one of the most successful rhino conservation projects in Africa. A private wildlife sanctuary in south-eastern Zimbabwe is making great efforts to save rhinos from extinction.

The powerful black rhino was nearly exterminated by poaching in Zimbabwe in the 1990s and 2000s and was completely eradicated from Gonarezhou National Park, the second-largest wildlife reserve in the nation.

It is a target for organised poaching gangs because of its horn, which is worth its weight in gold.

The privately funded Malilangwe Trust was established in 1994 and started out with the importation of 28 white and 28 black rhinos from South Africa.

Today, there are 175 Black Rhinos and 259 White Rhinos in the herd.

He spends time with the Malilangwe Scouts, the sanctuary’s highly skilled anti-poaching team, which serves as the front line defence against the persistent poaching threat.

“Individually you can’t win against poaching and we need every one of us to fight against poachers,” says Patrick, a Sergeant in the Scouts. “You have to be a team, a strong one.”

Davie captures all the incredible action of the hectic ‘rhino ops’ where specialists dart the animals from helicopters then move in on 4WDs as they dash across the park. Led by ecologist Sarah Clegg, the “rhino ops” team collect vital data on the herd.

“They’ve got this reputation of being bad-tempered and dangerous and they are, but I think it’s mostly that they’re just such emotional creatures,” says Sarah, who’s studied the animal for more than two decades.

“They’re just insecure, you know? And so they need more love.”

Malilangwe increased its rhino population to such an extent that last year, it relocated some of its Black Rhino herd to nearby Gonarezhou National Park – a former killing ground for rhinos.

“It’s what we all aim for in our careers as conservationists,” says Sarah. “It’s a wild park, so being able to put the rhino back into that park is like waking it up again.”

This visually stunning story has a powerful message of hope.

“Everyone needs to know the rhino is special,” says Patrick.