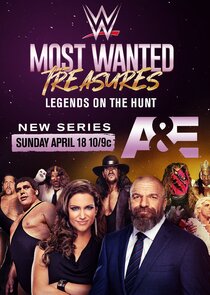 Booker T: With the help of his wife Queen Sharmell, WWE's five-time world champion, Booker T, scours the country for his lavish King Booker robe and his first WCW Championship Title. He's also on a mission to find the legendary dog collar worn by his childhood idol, Junkyard Dog. To aid in the search, Booker T recruits the one and only rattlesnake, "Stone Cold" Steve Austin.

WWE's Most Wanted Treasures takes viewers on a journey to find some of WWE's most iconic, lost memorabilia. In each of the nine episodes, WWE's Stephanie McMahon and Paul "Triple H" Levesque lead a team of collectors, WWE Superstars and Legends as they investigate, negotiate, bid and travel across the country to hunt down and reclaim some of the most elusive WWE collectibles. Throughout history, WWE's action-packed storylines have spawned iconic, one-of-a-kind memorabilia, most of which have gone missing. Superstar in training, AJ Francis will head out on the road alongside some of the most famous WWE Legends of all time including The Undertaker, Ric Flair, Charlotte Flair, Mick Foley, Kane, Big Show, Mark Henry, Jerry "The King" Lawler, Booker T, Greg "The Hammer" Valentine, Brutus "The Barber" Beefcake, Jake "The Snake" Roberts and Sgt. Slaughter. The series will unearth these rare items in the hopes of preserving and sharing the legacy behind the memorable moments in WWE history.