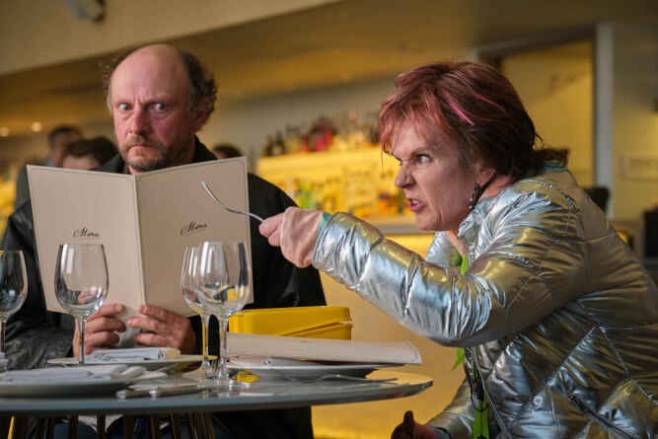 Can you tell us a bit about your character Lin, and what attracted you to the script?

Lin is Alma’s mother, who is in a psychiatric unit at the start of the series. I think she’s rather fabulous, but people may have different opinions of how she is! I was attracted to the script because I loved Sophie’s writing. I absolutely loved the script and everything about it – I think Sophie’s a bloody genius and that’s usually how I go with jobs. If the script appeals to me, regardless of how much my character’s involved, if the script is good, I want to be a part of it.

Can you tell us about the process behind creating the character?

I had to find my own way to do it, but with great help from Sophie. We really settled on the fact that even though Lin is a fully-grown woman she’s very very childish a lot of the time, and I liked the thought of that, and I loved the thought of being able to play that. Like a toddler doesn’t really have an edit button, Lin can’t edit herself at all and what you get is completely honest which can come across as being very harsh at the time, but she’s not going to excuse any of her behaviour as it is what it is to her and she’s got no filter. She’s the queen of oversharing! A lot of stuff she says is really spot on.

This is a lady who has been a drug addict and a drinker for a huge part of her life, so her brain is maybe not functioning as well as it would have done had she gone down a different path. The fact that she’s still creative and still wants to do her art and all of those things, sometimes the results of that doesn’t thrill everyone – especially her mother!

The pilot has had fantastic success, winning a Bafta etc, what do you think resonated so much with viewers?

I don’t think there’s been anything quite like it. I think Sophie’s wit is razor sharp and the series is full of wonderful characters that make you laugh. And the character of Alma… one minute you’re falling about laughing as she’s up doing Spice Girls karaoke and within minutes your heart is breaking for her. You want her to succeed – she’s the heroine of the piece. We’re on that journey with her and she’s got an absolute heart of gold. With the family, they’re not bad human beings, and even her boyfriend, who is sort of the villain of the piece, makes me laugh.

Do you have any standout memories from filming?

We really laughed doing the Zumba class scene. Most days I was laughing just because of what other people were doing. I could barely look at Lorraine Ashbourne sometimes because her lines are just absolutely brilliant. It was a very enjoyable job – it was just a joy to go to work! I loved the costume design on it, it was an absolute treat of a job.

For anyone who hasn’t seen the first episode yet, how would you describe Alma’s Not Normal?

If you want to go on a wonderful rollercoaster ride of fun, that’s what you’re going to do but you’ll be doing it with Alma and cheering her on and putting your head in your hands throughout it! It’s also got a real heart to it, so it’s not gag after gag. You can get involved and care about the characters. You’ll love Alma and want her to do well and won’t want her to be hurt, upset or fail but you’ll be quite happy to watch her doing a bit of that as well because it makes the successes all the more wonderful. It’s Alma’s resilience and determination that keeps her going, and will keep you watching.