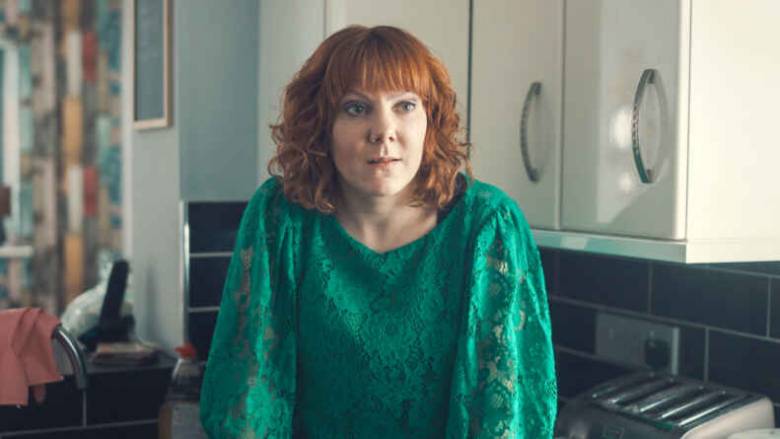 How did Alma’s Not Normal come to BBC Two?

In 2018 I won the BBC’s Caroline Aherne Bursary, where I was able to get into a room with former commissioners Shane Allen and Kate Daughton and tell them all about the sitcom I’d been planning and plotting in my head for years. I developed the script with Expectation over 18 months and then put on a live read-through for the BBC’s Patrick Holland. It was an anarchic do; a lot of shouting, singing, swearing and twerking… all with Patrick on the front row… he loved it. We got an on the spot commission to film it!

Turning your script into a pilot for BBC Two culminated in a Bafta for Best Writer – what an outcome!

I wasn’t expecting to be nominated and I was really shocked to have won. I was away filming Alma so I was staying on a farmyard, and wearing a sequin dress, watching the ceremony on a laptop. When I found out, I ran around for about five minutes because I wasn’t expecting to win. My friend and co-star Jayde Adams took a video of it that was so barmy it went viral!

My grandma was a big influence in my life and had always encouraged me to write  she passed away the night I got nominated for the Bafta and it was a month to the very minute that I actually won my Bafta – so that moment felt very much in the spirit of Grandma. She was my foster parent and she had always been a very big encourager of me to be a writer and performer, so it felt quite a special thing really.

The series is very funny – have you always laughed through the dark times, and is comedy how you naturally deal with reality?

Definitely, I come from a very funny family, and I think that’s how all of us have survived really. There’s been a lot of trauma, not just my life but generally, and we have a laugh in the tough times.

Yes, I don’t think there’s ever been a storyline of a care-experienced person in a comedy. And when we are on screen it’s very rarely positive. As someone who’s personally been through the system and had my own records back, telling this story with honesty, humour, optimism and love was extremely important to me. Obviously everybody’s care-experience is different, but the episode where this is explored is kind of my love letter to Care Experienced folk.

The fact that there is a strong, dynamic character at the heart of it the series must have been important?

And flawed. I think, that’s the inspiring part of the series, that Alma is OK, but she is flawed and that is OK. There will always be things that you’ll struggle with, everyone does. But the thing I like about Alma is the depiction is real – she is actually optimistic; she is positive, and she is going to be alright, but she is going to mess up too. She will make weird choices; she will struggle and that’s OK – you don’t have to be all or nothing.

Your female co-stars, they are superb. What were they like to work with?

All the women cast are so passionate about the show – I feel really, really proud to have such a lovely group of people who have been wonderful, kind and supportive. Lorraine (Ashbourne), Shiv (Siobhan Finneran) and Jayde (Adams) are the absolute best co-stars; such incredible actors who all something completely original and unique – they’re all strong, powerful, female performers and yet none of them are similar to each other.

You are a writer, performer as well as one of the executive producers on the series. How did you feel balancing all those roles?

It’s really exciting to be able to be all over something and to be given such creative control. Nerys Evans at Expectation, Gill Isles and Andrew Chaplin, and with the BBC, the whole team have enabled me to be all over everything and it’s not often that you get that opportunity, so I feel really grateful.

The costumes Alma wears are just brilliant. How much influence did you have on that?

I put a couple things in the first episode’s script such as ‘pink fur coat’ and Daniella Pearman the Costume Designer, just ran with it. She’s incredible, I think she is amazing. Between her, the DOP (Nathaniel Hill) and the director Andrew Chaplin, they have made it ‘pop’ amazingly on screen. The amount of precision and thought put into the costumes was fantastic; each mood of Alma has a slightly different look, and every character has their own colours. Daniella is really smart with it, and it makes it really fun but really clever.

How important was music in the series?

I’m passionate about music on screen, and for me, particularly, I wanted to push as much as possible a female soundtrack with female leads. A lot of punk, riot girl sounds and just music that I felt was a bit different and represented Alma. When I was on the pilot, I put that list together myself, with some support from Chappers [Andrew Chaplin]. this time we have had the music supervisor, Karen Spearing, who has been great, and Chappers has been more involved with the music as well. Between the three of us, we have put together quite an exciting soundtrack.

What do you hope audiences will take away from Alma’s Not Normal?

Well, I hope they find it funny, that’s the first and foremost. I hope that it’s uplifting and optimistic whilst also connecting in its more difficult moments.

You offered internships and possibilities to young care-experienced people as part of the production. Can you tell us about this?

I’ve always done a lot of work with care-experienced people. I have a charity called Stories Of Care, where we work with care- experienced people, we publish books with them and do creative schemes with them and professional development. On every project I’ve ever done I have some scheme going on, so it feels fitting to be the same with the TV series.

We set up a training scheme with Gill Isles, Expectation, and the BBC, for care-experienced people to work in different departments, either production office, or costume departments, runners on the floor. So they get paid experience in TV which can lead onto other roles in the industry. One of our trainees went straight onto a second job in telly after doing so brilliantly on Alma.