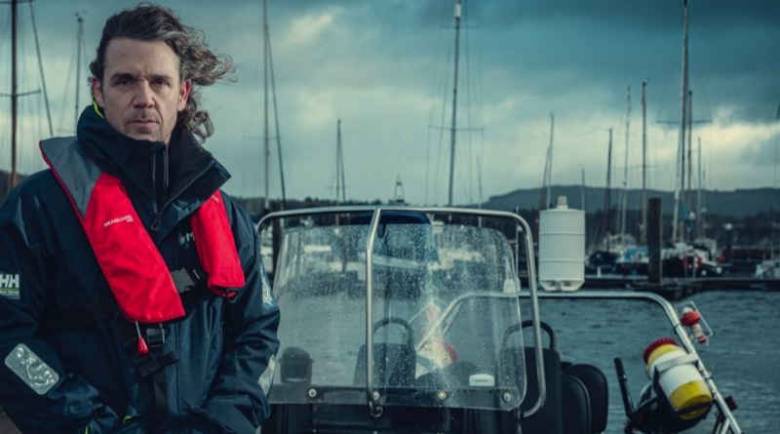 Q: Could you please fill in your character’s back story for us?

A: Michael is a diver first and foremost. He went to police college with Annika and imagined he was a shooin for the job that she gets as the head of the new specialist Marine Homicide Unit (MHU). So, his nose is out of joint. He is huffy that she has waltzed in and taken his job. But as time goes on, he rekindles his friendship with her. To begin with, he is a bit spoilt, but he soon wins people over.

Q: How would you characterise Michael?

A: He’s quite louche, laconic, acerbic, and humorous. He doesn’t take things too seriously, but when the stuff hits the fan, he instantly jumps into action. One case involves a family member and he’s on it immediately. He’s a good, likeable guy.

Q: What was the scariest moment during the shoot?

A: In one scene, they blew up a pontoon. They had helicopters, police and fire brigade all standing by. It was a proper James Bond style explosion. My reaction to that was completely natural!

Q: Did you enjoy working in your native Scotland?

A: Absolutely. I have never spent so much time in Inverclyde. We had a lot of fun out there. There were no other boats on the Clyde, so we had the whole playground to ourselves. We were racing around on fast ribs and had access all areas. We could go and do doughnuts and U-turns at high speed. It was fabulous!

Q: And the beautiful Scottish scenery is like another character in Annika, isn’t it?

A: Definitely. And it’s all for free. We filmed at Ben Lomond, which was amazing. There is no better place to be. Nuclear submarines were going past, which was very exciting. The scenery is completely scene-stealing. It doesn’t matter what you’re doing, if Ben Lomond is in the background, no one is looking at you. You can say anything you like!

Q: How did you find it working with Nicola?

A: She’s a national treasure! She doesn’t take it too seriously between takes, but as soon as the director calls “action”, she turns it on. She is very friendly and funny and terrific company. I loved working with her. I would be quite happy to work with her all the time!

Q: Would you be up for making more series of Annika?

A: Absolutely. I would love to do that. It would be great to spend three months with Nicola, Katie, Ukweli, and anyone else who fancied it. But it does get cold. It’s the wind chill factor that gets you. If there is no wind, it’s bearable, but the wind really beats you down. So, it might be an idea to film the next series in summer!

Q: Michael has to dive into the water quite a bit. How did you find that?

A: Being Scottish, I have jumped into a fair few lochs in my time! You have a wetsuit on, so the initial cold water shock doesn’t hit you. It’s just a dip in cold water. And that’s apparently good for you. I do all my own stunts.