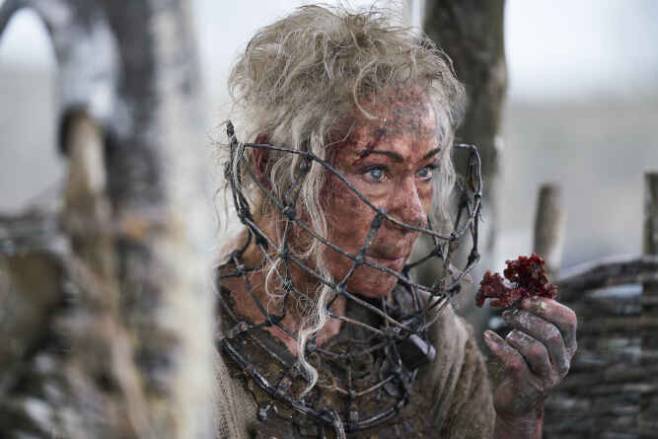 Queen Antedia has been missing for a few episodes. Was it always the plan that you would come back at this stage?

I have no idea what they had planned! She was auctioned off – and peed on – in the second series, and when we come back to her in this series, she’s being kept in a hole with a chain around her neck. She’s been there for a couple of years and she’s wearing a cage on her mouth so that she doesn’t bite people, which really makes me laugh.

She’s been abused, and lives in the latrine outside. She’s a warrior queen who has been forced into this state because she’s lost her tribe, which was wiped out by David Morrissey, the bastard!

Antedia was a killer, at the top of her game, but she’s been betrayed in every way so she’s got a journey ahead of her. She feels like she’s been let down by the gods, and those she trusted and put her faith in. Now she’s trying to find her way back.

Self-preservation, as well as loyalty to her tribe, is what keeps her alive. Also, it’s rebelling against the invasion of another tribe that comes in and tries to dictate to everybody. The Romans are pretty vicious, but Jez and Tom also go off into completely different tangents which open up a whole discussion of possession because everybody was from somewhere else, whether that’s France or Germany, then the Vikings. Nobody is English. Everybody comes from some other place, which is always fascinating.

Do you think there are modern parallels?

It’s happening all over the world, tribal warfare, and that’s what it’s about. It seems to be a universal situation and a perpetual situation. It’s all about, “This is my religion, this is my land, this is my tribe.” But history just keeps repeating itself. What Jez and Tom have done is that they’ve played with the concept of tribalism and religions based on magic and things that we simply don’t understand, like the Druids.

She forms an alliance with Cait. This is your first time working with Eleanor Worthington-Cox, isn’t it?

Yes. She’s extraordinary. She was working every day, and she’s so young. Her journey from the first series to now is fascinating. Antedia forms a partnership in recognition of another psyche, which is about independence. A lone woman on the road and a lone woman on a horse, seeing each other and recognising each other. It’s that understanding. Antedia sees a lot of herself in Cait, and she’s also without a tribe, and she’s found a soulmate on another trajectory. That’s what is attractive to her: here’s this young thing who is a fighter, which she recognises in herself. That’s what attracts them to each other. It’s a strength. They recognise each other as being completely independent and free-willed, and trying to get along, trying to get somewhere, trying to have a purpose in their life. It’s always useful when somebody writes that.

Through this relationship, we see Antedia become a bit more vulnerable. Do you feel we’re seeing a different side to her now?

Yes. Well, there’s got to be something more to her than swearing! There’s got to be a three-dimensional person there. To just say, “I want revenge,” isn’t enough. It goes deeper than that.

When Jez first asked me to do it, he said, “She’s an angry queen.” Well, there’s a lot of angry queens around! But she’s been betrayed from the get-go. Kerra castrated her son Gildas on his wedding night, then General Aulus betrayed her, so she’s very angry but we all have a back story. We’ve all come from something, and that goes all the way through our veins. To try and rectify that is about self-knowledge. She gets betrayed constantly, so of course, it would make you cross!

You get some of the funniest insults. Is it a joy to get these scripts full of ‘dopey ball bags’ and ‘nipples’ and ‘ginger mitts’?

Oh, yes! When they’re inventive, they are very funny. I love the f-word, but you have to use it when it’s powerful, so it means something. Sometimes you need something a little bit more colourful because that’s more interesting. So when she does say the f-word, she really means it.

It sounds like you’re quite collaborative in terms of the script. Do you chuck in some of your own phrases sometimes?

Yes! My favourite one, when I’m captured and my son is killed in the first series, I say, “General, I would call you a c**t, but you don’t have the depth or the warmth.” I put that one in. The more the merrier, I think, because it makes her much more colourful and much more interesting because she’s got a brain. That’s the thing about her. She has a brain. She has to because she’s a queen. Language is very important to her.

Are they happy to have your take on it and listen to your notes on the script?

Yes, absolutely. It’s interesting because they enjoy feedback. The thing about most filming is it’s always a collaboration between you, the script, and the director. It’s got to be a team effort. It’s about sharing, so everybody is on the same page, in a way. The same thought process and finding out where this fits in, where it doesn’t fit in. There are so many strands in Britannia.

Were there any particular people that you enjoyed working with this time who were different from previously?

I loved working with Julian and Nicolaj, and the new girl who plays Drella [Shonagh Marie] who is a wonderful nutcase. Then we have Bluey [Robinson] who plays Rayne, another new character, which is great. So there’s all these vagabonds that have come into the equation, all looking for something. They don’t know why they’re there. Working with Nicolaj was great fun, and I’ve known Julian for years, who I adore. They’re all lovely. They call themselves the Magnificent Seven, which is adorable. Nicolaj and Julian have a wonderful relationship which has been fun to watch.

I’ve spent most of my time on the back of a cart, going on this trip with them, so that’s been fun. It’s been fascinating, because this Cait and Divis twosome has now opened up into something else. It’s been really enjoyable, because I hadn’t really spent any time with them previously.

Were there any locations or stunts that you particularly enjoyed?

There’s only so much I can do in a horse and cart, because if the road is rocky, I can’t do it – it’s too much for my back, so I’m ruled by the road and the horse! That takes up a lot of time. We should have finished this in September, but we ended working through the winter because of Covid delays, which was the worst winter we’ve had in many a year, so that was a struggle.

The producers set me up in a nice little tent with a portable loo saying ‘Queen Antedia’ on it. It was very nice of them but I didn’t like sitting in the tent by myself, I got bored! I like to sit and gossip with the others. Most of the time we were outside, so it was a relief to get into the studio, which was only for about two scenes. The locations were extraordinary, but it was riddled with all sorts of problems. Rain and snow, the cold and the wind – we were hit with all the elements.

What would you say your biggest challenge was?

I would say the weather. And also, the costumes. The wonderful Ann Maskrey who designed the costumes, is spectacular. When we started together on the first series, she and I created this character between us like Tina Turner in Mad Max, but because the costumes are layered, going for a pee is a major event! Someone has to help me get back into it afterwards. I had thermals, trousers, a shirt, a skirt, a jerkin, and leather gloves, so it was really complicated to get anything off. I didn’t drink much water, put it that way!

An added complication was that we’d have to climb through mud, and the boots didn’t have any grip. We started filming in a quarry in West Sussex, and it poured down, so it was impossible to walk anywhere. We’d slip and slide all over the place. It’s just the logistics of everything. I wasn’t alone in the costume problem, because Mackenzie had a few problems as well.

Talking of Mackenzie, he directed the series for the first time as well. Did you enjoy being directed by him?

Yes, I did the first Wurzel Gummidge with him in which he also had to direct in prosthetics. In that he also wrote and designed it – he’s a phenomenon, he really is. There’s a soft quality that he has, but he also has a visual sense, an intelligence. It’s a delight to work with people that have that kind of energy. It’s always pleasing to work with somebody who has that kind of vision, and who has that kind of intellectual quality. He has a point of view and an imagination which fits in very well with Britannia.

Were there any actors or characters you wish you could have shared a scene with?

All of them, actually! David Morrissey and I had great fun in the first series, but in this series they’ve written me going on a completely different tangent. I had a tiny scene with Nicolaj, which was delightful. I’d like to have had more of that, because he’s very free. Julian is lovely to work with.

They’re all lovely. It’s a collaborative situation, so all the actors are great to work with. It’s very clever casting. Bringing in Sophie, who I only met once or twice, was a brilliant idea.

I had a couple of scenes with Hugo Speer in the first series, when we were shooting in Prague, which was divine. Those were the days when you could go for a drink with somebody, so that was fun. But now, because of Covid, that can’t happen and that’s the shame of it. You should be talking and being and sharing. Everybody feels that.

I had a couple of scenes with Hugo Speer in the first series, when we were shooting in Prague, which was divine. Those were the days when you could go for a drink with somebody, so that was fun. But now, because of Covid, that can’t happen and that’s the shame of it. You should be talking and being and sharing. Everybody feels that.

Everything I do is a new thing. If it scares you, that’s what attracts me. Anything that’s slightly off the wall. I did Shadow and Bone recently, just before we started back again, and that’s another fantasy thing. Another thing about magic! I think I’m attracted to fairy stories. To me, it’s heaven, going to another world. You get to dress up, and mess about in the freezing cold, it’s fun! In the end, it should be something you enjoy being a part of.