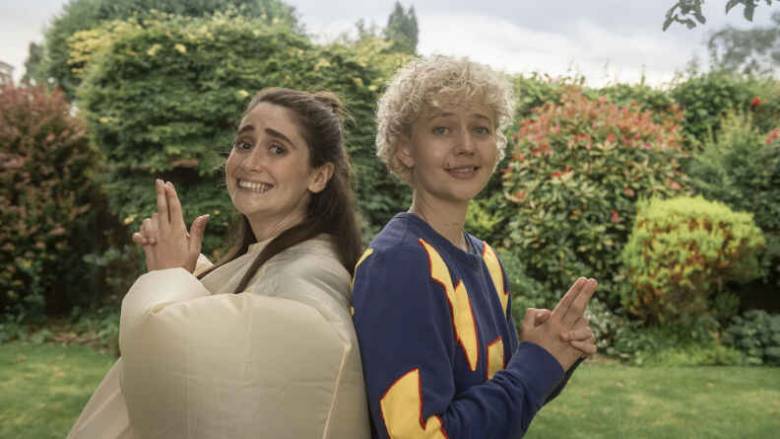 Tell me about Britney?

Charly: Britney is the very true and very funny story of when I was diagnosed with a large pituitary adenoma (a type of brain tumour), and I moved back to my tiny childhood village to deal with it. Luckily, my best friend Ellen was nearby–

Ellen: Having glamorously not yet left home–

Charly: Right and that is glamorous. So, we were able to face it as a duo.

But that sounds like a sad story, and this is a comedy. How did you manage to find humour in such a difficult situation?

Ellen: Well, it was never a conscious decision to find the humour in it. But Charly makes me laugh more than anyone else in the world…

Charly: And Ellen makes me laugh more than anyone else in the world–

Ellen: Except whichever boy you fancy–

Charly: True! And we were back together for the first time in a few years having studied apart, and so it was just a case of ‘let’s have a nice time and try to discuss what’s happening as little as possible’.

Why did you decide to write your story into comedy?

Ellen: It was our dream to do comedy together from when we were teenagers re-enacting Smack The Pony and French And Saunders sketches in our bedrooms.

Charly: And we were considering trying to write a sketch show anyway. And then every time we came to write any kind of comedy over those months it ended up being brain-tumour related, because I guess it’s so much of what we were thinking about.

Ellen: Charly’s brain is so weird – even without the you-know-what – so she had a mad way of explaining stuff. Like how surreal it was to be told there was something in your brain you didn’t know was there that needs an operation to get rid of, she explained that to me as like finding out there was a small Welsh town in your brain, whose inhabitants are really pissed off they’re about to be evicted. And every time that happened I was thinking ‘this should be a show; how else will we monetise the experience?’

Is the TV show different to your Edinburgh stage show?

Charly: Totally different, in some ways. In the show Ellen and I play all the parts and it’s very, very sketchy. Tonally, we hope the pilot has maintained a sort of wild energy, and the love-story that’s underneath the stage show, but just by virtue of actually having locations and sets and other actors it’s really different.

You’ve got a great supporting cast. Did you have an idea of who you wanted to play the roles of your parents/doctor etc?

Ellen: Oh my God an incredible cast. I can’t believe any of them said yes.

Charly: We really wanted everyone who you watch in the pilot to take the roles, so it is a real dream. We’d always hoped Tony Gardner would play my dad, Bobby, if ever a TV show got made, so it is a mad pipedream that he… did?!

Ellen: The only person I was slightly gutted about was we’d offered Daisy Edgar Jones the role of Charly, but she was filming some sort of Irish thing so couldn’t do it. But Charly does a really good go.

Getting Omid Djalili to star in your programme is quite a coup.  How did you convince him to join the cast?  Did he accurately portray your actual family doctor?

Charly: Omid has been a huge fan of ours for a really long time, we actually taught him everything he knows about comedy.

Ellen: Right so when he wrote to us begging for what he described as ‘the opportunity of a lifetime’, we thought we’d give this plucky newcomer a chance.

Charly – you were desperate to stay in New York. Do you think you might ever go back?

Charly: Oh bigtime! I’m not done over there. I didn’t get to leave on my own terms, I left because of my diagnosis and the fact that the American healthcare system is dogsh*t but I’ll definitely go back, I’m excited to.

Was Mmmbop really your childhood song together and was it really played during your MRI, Charly?

Charly: No, it wasn’t playing in the MRI. Insanely the song that was actually playing was ‘Bad Day’ by Daniel Powter which turned out to be a bit too on the nose. ‘Mmmbop’ was and remains my favourite song because it’s perfect. I don’t think any song would have been able to make me feel calm because other than feeling a bit annoyed that my day was being delayed by a 45-minute MRI, I truly didn’t think anything scary or life altering would come from it.

What’s it like acting as yourself?  Did you find yourselves exaggerating your personalities/stories?

Ellen: I guess the good thing about the fact that we’re doing it together is that if one of us does start to exaggerate parts of ourselves in a scene we can say “chill out mate, you’re doing a bit much here” or “actually you weren’t wearing so much makeup or that padded bra for that part of the brain surgery” etc.

You both seem to find the funny side of the darkest situations. Do you use comedy to get through difficult times?

Ellen: I don’t know if this answers the question, but the first thing Charly did after the diagnosis was put on an inflatable sumo suit and I wrote a comedy eulogy.

Why did you name your tumour Britney?

Ellen: It’s easier than always referring to it as ‘that enormous tumour resting life threateningly close to your carotid artery’.

Are you Britney Spears fans?

BOTH [screaming]: Of course! We wouldn’t trust anyone that wasn’t.

You have the most incredibly unique friendship.  Do you ever fight? Do you ever get on each other’s nerves?

Ellen: Yeah, we definitely fight. We hate to do it though!

Charly: We always try to make up before we go to bed, even if that means a very late walk and a Strongbow Dark Fruits and a chat.

Ellen: We spend a huge amount of our time together, and often find we’ll be up into the early hours of the morning because we have so much to ‘catch up on’.

Ellen: It just does feel odd for us to be too distant. Charly’s new phrase which cracks me up and I think is quite demonstrative of the vibe is ‘close my door on your way out but we are on good terms’.

Charly: By virtue of spending so much time together and having been best friends since we were 14, it would be creepy if we didn’t sometimes get on each other’s nerves.

Is your friendship exactly as it’s portrayed in the programme or is it exaggerated in the name of comedy?

Ellen: If we wrote like we actually talk I reckon it’d be unintelligible.

Charly: Yeah we’ve had to write in more ordinary human speech otherwise nobody would have understood what the hell was going on. The friendship in the show is honestly completely authentic, if anything we’ve had to chill it out a bit for TV.

Ellen: Our only fear is that, in mining the friendship for our careers, are we hollowing something out deep within us?

Charly: But then we think ‘but it’s the BBC!’

Charly: We were at school with each other for two years in different classes before we realised we’re soulmates but when we did it was instant. Ellen’s family used to call me ‘FMK’ which stands for five-minute kid because we became best friends in five minutes.

Did you vaguely know each other already when you met on that fateful school trip?

Charly: Yes, we were in the same school but in different classes. Ellen was in the top set of most subjects and was quite cool and sporty.

Ellen: And Charly spent quite a lot of time reading the Twilight books in the toilet.

Charly: So we did know of each other but it took a couple of years for us to properly spend time together and become inseparable.

Did writing this programme make you nostalgic for your past?

Charly: Yes and no. It was definitely nice to revisit lots of the jokes and adventures we went on but it wasn’t a barrel of laughs dredging up the medical stuff. Having said that though it was very cathartic to look back on everything and choose how to tell the story, it was quite freeing in some ways.

Have any partners struggled with the closeness of your relationship?

Charly: I don’t know that two men would ever be asked how their wives cope… If they do struggle with it, ideally they’d just raise it and we’d all be able to come up with a solution in the bed we all share.

Ellen: (Laughs uproariously.) Yeah, I mean it’s just got to be a given. And our partners tend to like the other person. That’s obviously a bit of a dealbreaker. I had a girlfriend, Emma, at the time when Charly was ill, and it’s fair to say that I couldn’t have been there for Charly if Emma hadn’t been there for me. And thankfully she really loved Charly too and she was brilliant about it. We’ve edited her out of the show because I didn’t want to seem unavailable when I was on TV.

Do you still plan to live next door to each other with a tunnel joining your two houses when you eventually live with your own partners?

Ellen: Yes, honestly. Every time we go past two weird-looking houses next door to each other anywhere in the world we go ‘is it them??’