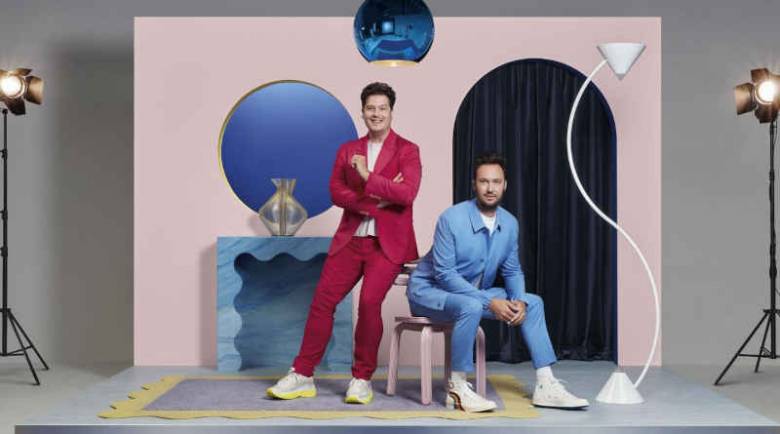 Russell Whitehead and Jordan Cluroe describe their design style as ‘joyful minimalism’. Originally coming from a theatre background, they founded 2LG Studio – their interior design consultancy based in South East London – in 2014 and have been described as “the rising stars of the interiors scene” by the Sunday Times.

According to British Vogue, Jordan and Russell are a defining force in “the future of interiors” with their “soft and squiggly” designs. Their adaptable and personal approach to design allows them to respond uniquely to the specific human needs of each project, combining form, function and decorative joy in equal measure.

What are your memories of Changing Rooms the first time around?
Russell: I used to live for Changing Rooms. It was such a family event, I remember having spag bol and the whole family all sitting around and laughing at Changing Rooms. It was proper, mid-week family time.
Jordan: I grew up in a really sporty household where all my brothers were very into sports, and we used to have to watch things like Match of the Day and A Question a Sport. And the one thing that I got to watch was Changing Rooms, it was iconic.
R: What I loved about Changing Rooms was that it was all about creativity. It was like, sod perfectionism, let’s just dive in and be creative and have a go. And I love that attitude, that’s what we’ve tried to bring forward in our own life.

Did the series have any influence on you both becoming designers?
R: I think it planted a seed for me. I can remember saying to my mum I wanted to do my bedroom up, so we went and got the proper old-school, matching border and wallpaper and curtains and bedding. I was thrilled with the whole process of decorating my bedroom and that seed was definitely planted by Changing Rooms.
J: I don’t think I was aware that a career in design was even a possibility before Changing Rooms.

So how does it feel now you’re part of the new Changing Rooms?
J: Amazing. We said in one of our screen tests they can’t make it without us.
R: We said this is a ship we have to be on. It’s a complete pinch me moment and a dream but, at the same time, when we were asked to screen test for it, it just felt strangely right.
J: It’s the sort of show we’ve been talking about for years. And Changing Rooms is the one, it’s the original design show so it feels sort of serendipitous.
R: We’ve gone through a period post the original Changing Rooms where everyone’s been taking themselves very seriously. The design world has all been very serious and there wasn’t room for this kind of positive, happy, creative approach. And I feel like now is the right time because people just want to have some fun, bringing some colour into your home is a very basic thing to do but it’s needed right now. We take design seriously, but we don’t take ourselves so seriously so as long as you’re doing good design, you can have fun with it.
J: Previously people were all about bricks and mortar, how can I increase the value of my property? Whereas now, people are thinking, how can I increase my experience of my home? How can I live in my home better? Changing Rooms is about creating a wonderful space for you to live in and enjoy. It’s less about property and more about people, and that’s what attracted us to design in the first place.

What can we expect to see from your designs on the show?
J: Lots of colour.
R: Colour is a passion for us. The most important aspect of any of our designs is about defining the function and making a room work for your life better. We always try to make the best version of something. It’s not about us imprinting our design or our egos on a space, it’s about us saying, what can we do to help you live your best self in this space and what’s going to make your life a bit better? Once we get the function right, we can really play with it and layer on lots of colour.
J: We’re really interested in eco and innovative materials, so we’re using loads of recycled plastic, cork and marmoleum, just interesting materiality. And fun, we have fun with our designs.
R: It was actually really nice for us, as designers, to go back to making things and being hands on. We started out making a lot of stuff and being very creative, drawing and painting, but as our career has gone on, we’re more and more removed from the actual physical process of making things. So it’s been lovely to get back to being so hands on.

How does what you do differ to Laurence’s designs and was there any rivalry between you?
R: I don’t think Laurence was prepared for how much we genuinely love him. I don’t see the point in rivalry, I was just so excited to see every one of his rooms.
J: We are polar opposites, which is great, because there’s something in the show for everyone. If you love maximalism, you’re going to love what Laurence is doing. If you love minimalism, you’re going to love what we’re doing. Seeing his reveals was almost as exciting to seeing our own.
R: I’d love to know what he thought about our designs because he gives very little away.

How do you two work together? Are you always in sync with each other or do you bring different elements to your designs?
R: We often say to our clients, we have the arguments for you, and we know we haven’t got a design far enough unless we’ve reached some sort of conflict or tension. The tension between us is often where the really exciting parts of the design happen.
J: We push each other outside of our comfort zones. We actually have completely opposite approaches to things, if we had an hour to do the same task, Russell would think about it for 58 minutes and scramble to get it done in the last two minutes. Whereas I would start at minute one, and work slowly. We have really different approaches, but we get to the same destination. Often creative partnerships, like in advertising, work really well because you’ve got someone to play off. And because we’re married, we’re not afraid to take it that bit further than you might in a normal working environment.
R: I would say Jordan is braver than me and he’s definitely very instinctual and very confident in his own instincts, whereas I’m very narrative…
J: Russell is really good at detail.
R: I like story and I like to work out how the story works and follow that narrative through in all of the design elements.
J: I would say you’re a bit more creative than me in some ways, because Russell has these crazy ideas where I’m like, ‘Oh, god, no, that would be awful’. And he’s like, ‘trust me, babe’. There are those moments in the show where even I’m a bit like, ‘Oh, God, I don’t know…’

When many people remember Changing Rooms, they probably think about the homeowner reactions the most, as well as the disasters. Were the reveals nerve-wracking for you?
J: We hadn’t really thought about the reveals until we’d done the first makeover, and then we were like, ‘Oh, God, now we have to show them!’ It was a strange feeling of I love it, so I’m confident they’re going to love it.
R: Maybe that was very naive, blind confidence! The nerves for me, were at the beginning and showing the colours because we do often use really bold colours and it can be quite a shock.

Linda Barker’s teapot disaster is, perhaps, the most iconic moment from Changing Rooms history. Did you have any disasters during the makeovers?
J: There is a moment that is slightly akin to the teapots.
R: I think my favourite moment was in Leeds because it’s one of those creative moments that we came up with in the studio when Jordan had said, ‘I don’t know, I think you’ve gone too far’. But we did it and I just remember seeing everybody’s faces in the room… And I just had this sinking feeling that it was not going to plan… But I just had to carry on.

What are the standout moments from the series viewers should be looking out for?
R: I’m going to say the disco sausage but will say no more about it. And there’s some hair art which is very enjoyable.

What’s the one piece of advice you would give to somebody before they start redesigning a room in their home?
R: Don’t start with the budget, start with the creative. Build the story you want to create, work on the design and the creative, and then work your budget into it. There are so many different ways to fulfil that creative vision in terms of different price points.
J: And I would say follow your heart, don’t follow trends. Trends are there to sort of distract you sometimes and they’re ever changing. If you love bright orange, have a bright orange wall or bright orange room. Your home is for you at the end of the day so do what makes you happy.

Tell us a bit about yourselves and how you got to this point in your career.
J: We both started out in theatre, as actors, so in a way, it does feel coming full circle coming back to performance television.
R: I wanted to be an actor from the age of seven. I went and trained professionally and worked in theatre for 10 years but I took myself incredibly seriously. And it can be quite a cutthroat world. I reached a lot of the success that I wanted, but I was quite mean to myself and I wasn’t having a good time with it because I took it so seriously. So the second career was an opportunity for us to go, let’s put all that aside, let’s stop judging ourselves and let’s find some creative freedom. We reached a crossroads in life where we were like, this is what we chose to do as kids, and this is what we’ve trained to do, but it’s not making us happy. It’s hard to dramatically change course but it was quite an incremental change. It didn’t happen overnight, we slowly realised we were finding more happiness in design than we had been finding in our chosen profession.
J: There’s something really freeing about becoming your own boss and running your own race. And I think once you’ve worked in any career at a certain level, and you know what it takes to achieve something, you can move onto to something different. We’ve done everything from textiles, to wallpaper design, furniture design, hotels, people’s homes, a children’s nursery, we’ve really grown together so much.