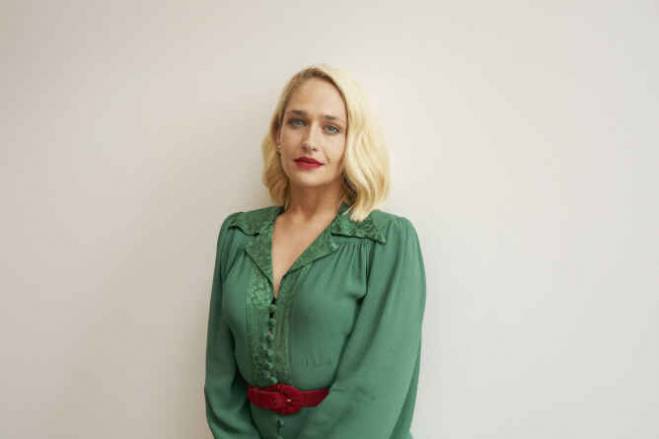 Tell us why you wanted to be involved in this project, what attracted you?

At first it was the fact that Lenny was making it – I admire his work and it was exciting to be attached to something he’s making. Then I read the book and loved it. There was something about the quietness of the story that intrigued me. Especially as an actor, because it’s not an action-packed story, but the story lies in the mundane and everyday comings and goings of the couple, friends and their everyday conversations. A lot can be told through the way someone cooks a meal or says hello. This story puts a lot of value in those moments.

What were your initial thoughts when you read Conversations With Friends?

I think Sally Rooney describes anxiety very well. She creates this visceral experience of anxiety, awkwardness, confusion and shame. It’s a very internal world that she’s creating and it’s quite fun to try and express what’s reality and what’s her perception. I also appreciated that not all the characters were all good or bad. No one’s a villain here, no one’s in the wrong or the right. It’s a book that really lives in the grey area of relationships. I also noticed that her words started to linger in my head after I read the book. Even just drinking a glass of water, I found myself hearing her voice describing that drink, which she does so well.

How do you think the scripts honour the novel?

I’m always impressed at how a writer can create a screenplay out of a novel – it seems like such a daunting task to know what to eliminate, what to distil and what to embellish. I think that has been done with a lot of grace. There have been some moments of creativity. A few things have changed here and there, it’s always fascinating to read over those changes when you know what’s in the book. But of course, there’s things I miss from the book. As a fan of the book, you want everything in there, but you can’t, and I trust that the writers know what’s necessary.

Describe Melissa to us and the journey she goes on…

I think she’s an independent, progressive, successful woman and thinks of herself as quite open minded, especially when it comes to relationships. When the affair happens, she’s forced to grapple with how she wants to be perceived and how she actually feels; she ultimately chooses other people’s perceptions: “I’m going to be cool with this, I’m going to make this work and incorporate it into my life” and make this new kind of relationship where we’re all going to be happy together.

But I think she has a part of herself that is deeply traditional and jealous. There’s a performance aspect to her character. She wants to be thought of as cool, in control, magnetic and approachable, yet intimidating. But I think that there are also insecurities and other flaws that she doesn’t like to give into.

As a writer, she creates a blueprint for her life and how she wants it to look, and I think that some of the aspects of her life are quite curated: she got the husband, career, friends, and the parties. She’s quite comfortable living with that blueprint and then Frances comes along and breaks it, and she has to think of a way that she can still control the narrative by allowing it. By allowing it she is controlling it in a way, because she’s forcing herself into the situation.

She’s a very complex character, what was the challenge playing that?

I had to do a lot of writing on her, take certain lines and really unpack them and try to understand the subtleties in everything she was saying. She is a complex character to play because she is quite even-keeled. She’s not the most eccentric character, which can be quite easy to lean on.

Tell us about the relationship between Melissa and Nick when you first meet them?

I think that she met him at a time where she was trying to build the foundations of her life on a superficial level. He’s not only quite a good-looking husband to have in your blueprint, but he’s also quite a canvas to project your own wants onto. Whatever you really want him to be, he can be, so long as you have the creativity for it, and she does. He’s also a bit of a ‘yes-man’, which is great for her because she likes to be in control, and she likes to be the most flamboyant one in the relationship. I don’t think she would do well with someone who told her what to do or had any issue with her behaviours. It seems that he’s passive enough to allow just about anything, even an affair.

What does Melissa think about Bobbi and Frances when they first meet, and why is she so intrigued by them?

It’s about timing. There’s a timeline in this story that starts before the book even begins. We know that at the time when Melissa meets Frances and Bobbi, her and Nick had just come out of a rough patch, but he is clearly still bruised and taking his time. She is giving that to him, maybe out of guilt or because she needs space herself. But they’re not totally connected and things are probably going a bit slower than she would like. He has his little routine during the day and she does her thing at night. They are quite separate entities.

Melissa is someone who likes attention, and she meets these girls who are fans, so it’s the perfect time for her to reap the benefits of that fandom. I think she’s also looking to kick up a bit of dust in the relationship because it’s gotten stagnant. Bringing these two girls in, while it may be subconscious, is a way to self-destruct or at least throw caution to the wind and see what happens if she brings two attractive, smart girls into their world. It’s a bit of narcissism and recklessness.

You have two directors on this, tell us about who they are and what it’s been like working with them.

We’ve got Lenny Abrahamson and Leanne Welham. They bring very different energies to the set and have different values. It can be an adjustment to go from one to the other. With both it’s been quite a rigorous process. It sort of feels like acting bootcamp because there’s so much importance on every little moment. From passing a bowl of salad to opening the door, nothing is throw-away. So, there are a lot of takes and a lot of rehearsals and talking about it, which I really appreciate.

Tell us about working with Joe Alwyn as your on-screen husband.

It’s a tricky thing because the relationship is supposed to be somewhat distanced but also there’s a history. There’s not that much screen time with them alone so we don’t get to necessarily see how they function as a couple when they are alone. That’s something that Joe and I had to create together and talk about, but never really get to act it out.

Another thing about their relationship is that the positive aspect of it is that we know Nick is a depressive and I think that anyone who is a performer of any kind – whether it’s in their careers or in their personal lives – tend to be a depressive because there’s a disconnect between who they are and who they show themselves to be. So, I’ve decided that Melissa has depressive spells as well and I think they lift each other up or pull themselves out of ruts, which we see narratively, but it’s also something I’ve created with Joe as well.

Tell us about working with Alison Oliver and Sasha Lane and what they brought to the roles?

When I first saw Frances come alive on screen, I was blown away. She really embodied what I’d imagined Frances to be, but more so. And that’s the job of an actor – to be the character, but even more than you thought you knew about the character, to make that character extraordinary, and she did.

Her skill – and what the character really needed – was someone who knew how to say something without saying anything, because Frances is quiet and there’s moments where her expression has to tell everything, she’s very good at that.

I think Sasha was so well cast because she brought something extra to the character which I didn’t read in the book. The book describes her as fun-loving, narcissistic (which is one reason her and Melissa get on), and maybe a bit free spirited. But Sasha dampened that bit, which I think is good because the free spiritedness can grow to get a bit old as an on-screen figure. Sasha brought a sort of soulfulness to the character and a stoicism. It made her more complex. What I didn’t see in the Bobbi character in the book was someone who was very considerate of other people’s feelings or was interested in doing the right thing. But I think Sasha’s Bobbi is the only true victim in the story and the only person who is not actively hurting anyone. While that may have been in the book, I didn’t notice it until Sasha played it.

What have been the most rewarding moments for you during filming?

It’s been a pleasure to watch Alison be the main character on this and how new everything is to her. Most actors, including me, are moody and want to get the job done and it’s like she has a sparkle in her eye. She’s so happy to be here and everything is exciting and then even when we’re shooting a scene together and it’s my coverage and the camera is not on her, she’s really helping me and doing everything to support me during the moment which is refreshing and generous.

Getting in the water was a moment for me. I had to recite multiple mantras in my head and have a cheerleading team behind me as I was walking in. I think one of the mantras was, “you can do hard things”, and I did it. When I got out, it being over was such a good feeling.

Then there were moments with Lenny where he will give his little thumbs up behind the monitor which makes you feel good because he doesn’t do that often. I don’t need him to, but it’s nice when he does.

What do you hope audiences will take away from the series?

There’s no formula for how you love someone, and there’s no right or wrong. You can hurt people, but that doesn’t always mean that you did wrong by them. I think people who are in open relationships will love this. I couldn’t do that, but I understand what they’re saying, because one of the most interesting aspects of the story is that Nick still loves his wife, and it’s not because of what was lacking that made him go to Frances, it was something that was lacking in him. It’s still possible to love two people, but ultimately we have to make sacrifices for the ones we love and the basic simplicity in our lives.