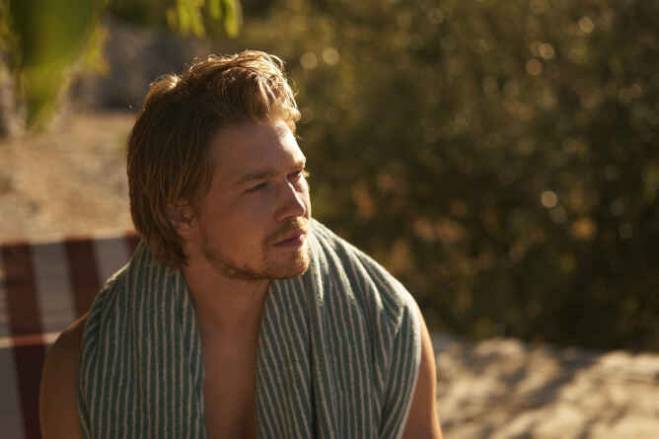 Why did you want to be involved in Conversations With Friends?

I was a big fan of Sally Rooney’s writing beforehand, I read Normal People and Conversations With Friends after being recommended them by friends. I got through them very quickly. I’ve also been a big fan of Lenny Abrahamson for a long time, I love his films and everything he’s made – what he did with Normal People was extraordinary and so the opportunity to marry the minds of Sally and Lenny – and be part of that – was very exciting.

What would you say are some of the key themes in the series?

Conversations With Friends is full of all different themes, but at the heart of it it’s about love, intimacy, desire and relationships. It’s about how we are able to love and find happiness both within social constructs that we’re more used to – whether that be within friendships, families or relationships – but also outside of those things, and how we’re able to find other ways of loving and growing outside of more conventional constructs.

Conversations With Friends is a love story but it’s not a conventional love story, it’s a modern take on that, how do you see it?

It’s pretty modern in its approach. It’s asking questions and challenging our ideas on how we’re able to love, exist and relate to people and be in all different kinds of relationships. Not just in the conventional ways we’re used to, it’s pushing boundaries of those relationship and love.

What were your initial thoughts after reading Sally Rooney’s Conversation With Friends?

I loved it, I just tore through it. Sally is such a brilliant writer, she’s so sharp and observant and often funny at times, but also moving. Although the characters in the book go through very extraordinary things in their own ways, they’re also very relatable.

How much of Nick from the book are you bringing to the on-screen version?

The writers have done a fantastic job in bringing the book to life. There are definitely bits and pieces they’ve maybe reduced a little or veered away from, but also bits they’ve lent heavily into for the sake of the story and narrative. By and large, it’s all quite consistent and that goes for the characters and Nick too. When you’re playing someone you’re also bringing yourself to it, so there’s me in it too. But in terms of Nick from the book, it’s the Nick I felt when reading the scripts.

What preparation did you do when you approached bringing Nick to life?

When I was cast initially, I had a couple of months to get ready. Then, due to the pandemic, things got pushed back a few times. Although it had its moments of frustration, it actually allowed for this pocket of time to think of the script, story and Nick. Full credit to Lenny, he was so collaborative and generous in terms of inviting everyone in on the discussions about character, script, story, and what he was imagining and planning for it, that a lot of preparation was through conversations with him.

I’d never really had that experience before with a director where that’s been so open. He would send through revisions from day one and wanted feedback on what I thought was working or not, so it felt like a conversation and collaboration. It wasn’t long after Alison and I were cast that we’d start meeting on video calls to discuss ideas. So really, those first few months of preparation was just through conversations with Lenny and doing my own work thinking about the script and Nick, and working with a dialect coach.

What does Nick think of Frances and Bobbi when he’s first introduced to them?

When Nick first meets Frances and Bobbi, because he’s come through such a storm and is in such a low place, a place of recovery, that at least initially there’s a kind of numbness to him. Everyone’s on the periphery, he’s in a low place of doubt and depression and just functioning and getting through the day.

I think he cottons on to the fact that there’s a similarity between Bobbi and Melissa, and there’s a similarity in his position to Melissa as there is with Frances to Bobbi. They’re next to these two people who are a little more extroverted and performative. I think with Frances, he quickly falls into this curiosity and deep attraction – not just romantically, but he feels a fascination with this other person. And though they might not know why in the beginning, they find themselves strongly drawn to each other.

What is Nick and Melissa’s relationship like when we first meet them?

When we meet Nick and Melissa, they’re certainly not in as bad a place as they had been a few months before. But that said, it’s definitely not good. They are functioning but there’s no real warmth, love or spark between them that there might have once been. What’s interesting is that, perhaps externally for other people, that doesn’t come across, and from the outside they look like a pretty happy, functioning couple. But, beneath the surface there are lots of cracks, and though it isn’t as angry or splintered as it was before, it’s still not a good place.

How did you find working with Jemima Kirke as your on-screen wife?

I loved working with Jemima, she’s brilliant as Melissa. She’s fantastic, focussed, works hard and is a lot of fun to be around, both on and off set. She has a real force.

What was it like to work with Lenny Abrahamson and Leanne Welham?

Firstly, Lenny is absolutely brilliant. He’s so special both as a director and as a person. In terms of his direction, he’s so detailed, intelligent, and emotionally intelligent as well, and tuned into what he wants and what should be there without being overbearing. He’s put so much thought into this, he’s just a genius.

He’s also incredibly funny and that makes a big difference on set, particularly when every scene is quite intense. It’s nice when the whole thing feels relaxed, and that’s full credit to him – he’s one of the funniest guys and best guys and I feel so lucky to be working with him. He’s an astonishing director.

And Leanne, coming into block two, was having to come on to something that was already moving and that must have been terrifying. She’s done an incredible job keeping it consistent in the same world that Lenny has set. She’s equally fantastic – the way she tuned into the rhythm of it and the way we’d been working. I think she knows what she wants and she pieced it together in her mind as she was shooting – you could feel that and she was very clear about that which is useful from a performing point of view. I felt very lucky to be working with them both.

Tell us about Alison Oliver and Sasha Lane, what are they like to work with?

I’ve had the best time working with Alison and Sasha. The bulk of my stuff has been with Alison, but Sasha – I can’t imagine anyone else as Bobbi. She brings such complexity and energy to the role and is a lovely person to be around. Alison is just phenomenal, the fact it’s her first role out of drama school and she’s in every single scene, it’s incredible, she nails every single take. It’s amazing to watch and I think everyone’s been learning a lot from her, and she’s one of the nicest people around.

What would you say has been your most rewarding moments during filming?

It’s always interesting when you do a scene where maybe you’ve had a strong idea of what you think it will be and how it will go, and then it ends up being something completely different. But it feels, you hope, right at the end of the day. There’ve been a few instances where you think you know the shape of something and then for whatever reason – Lenny’s direction, or the way Suzie (Lavelle, DOP) is shooting something or what the person opposite you is doing – it takes a turn and goes in a different direction and the whole feeling of it and shape of it becomes something new. I always find those bits quite rewarding.

What was your favourite scene to shoot?

There’s so many of them! One that jumps out was a scene we shot up in Ballycastle, which was quite a long one between Nick and Frances. Maybe it was one of my favourite scenes because, although it was quite a heavy scene it was very fun to do because we shot in a very nice pub.It was nice being up in Ballycastle and one of the first times we got to not be on set. It was nice to have a new energy, a nice scene in a nice environment… and a nice drink.

Are there any similarities between you and Nick?

I feel like on one level there’s a lot that’s different but there are similarities. Some of the things that he’s struggled with or moments of doubt, periods of being low, I can kind of relate to, but also periods of being happy. There’s an essence to him that I’m similar with, as much as there is circumstantially quite a lot different. That’s a very Nick way of answering – quite evasive, cryptic and guarded.

What do you hope audiences will take away from this?

I hope people enjoy it, obviously! I hope that it’s challenging in a way, it’s quite thought-provoking and complex. I don’t think there’s such an obvious motor driving it, it’s not two people in love – though that’s obviously complex enough! There’s lots of facets to it and it’s asking some challenging questions.

When the book came out it seemed to kick up a lot of debate and conversation, with not everyone being on the same page or with the same response. That’s quite interesting and more exciting than just one consensus. I hope the series provides that same level of discussion. And what I like about Sally’s books that I’ve read is that she doesn’t always tie everything up with a bow at the end, which is interesting and true to life. I’ll be intrigued to see how that lands with people – but hopefully, in a good way, it will provoke a discussion.