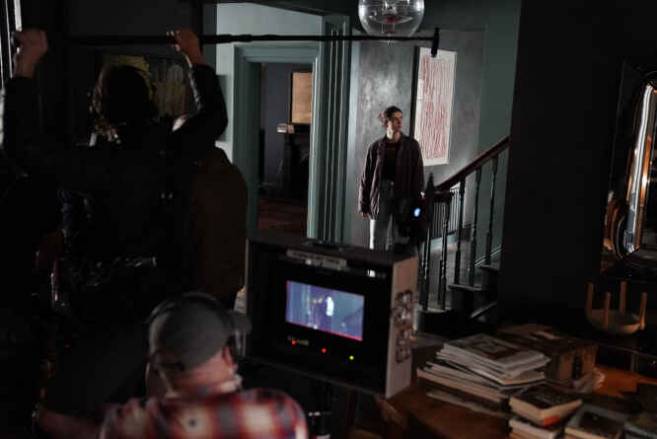 Element Pictures, who I work closely with on pretty much everything I’ve done, had optioned Conversations With Friends before Sally Rooney published Normal People, and were developing it as a feature film. I was taken with the book and loved the idea of doing it as a TV series, and through doing the work on Normal People, it made us realise the best way to do Conversations With Friends was also through a TV series. Having gone through the process once with a Sally Rooney novel, I was keen to do it again.

What’s interesting about Sally’s work is that it works a lot better if you can spend real time with the characters in a low-key way, and that you find your story, tension, and intensity by zooming in on things rather than have things big and loud. Her writing doesn’t necessarily lead into a big operatic arc, and so if you’re making a feature film there’s more pressure to find a single movement of story. When as soon as you think about Conversation With Friends in an episodic way, it completely unlocks it.

How did the adaptation of Conversations With Friends differ from Normal People, and what has been the most rewarding part of it?

The main difference is that you are always looking for the specific and not the general, you let the detail of that particular story determine how it runs. In Normal People, you have a very central love story and that’s a shape that audiences understand immediately, whereas in Conversations With Friends, you have a much more varied set of relationships and a complex story with a single focus, which is Frances. It’s more of a coming-of-age story than anything else, but that story is told through these relationships she has with Bobbi, Nick and Melissa. In an interesting way, it’s a messier and complicated story which doesn’t give easy solutions or conclusions.

One of the challenges is trying to ensure that complexity is maintained. Early in the story Frances meets Nick, and that new love could absorb all the audience’s attention. Whereas Frances’ relationship with her own life, herself and most importantly her best friend Bobbi, cannot be a ‘B’ story. As an adaptation it was complicated to keep all these balls in the air and it’s a complicated execution to keep that complexity going whilst still making it satisfying as a viewer.

What are some of the key themes running through the series?

Part of it is asking questions about what forms healthy relationships can take, and challenging traditional ideas of what a successful relationship is. It questions monogamy and how a person could love more than one other person in a way which is ethical. It’s also about the self-absorption in all of us as we hit early adulthood; in the effort to discover who you are, it is easy to lose the simple truth that it’s in your relationships with others and in the generosity of those relationships, that you find yourself.

Frances, through a lot of the story is so caught up in her own journey and assessment of where she stands with regards to other people, that she’s in danger of destroying the best relationship she has, which is with Bobbi, her best friend and ex-lover.

As a rough idea of what the shape of this story is, you could say it’s about how Frances having a relationship with this other person, Nick, is the thing that unlocks aspects of the relationship with Bobbi that she was letting die, or not attending to.

What do you think it is about Frances’ coming-of-age journey that would be so compelling?

Yes, it’s a coming-of-age story, therefore some of its shape would be familiar to people, but what can elevate a story is truthfulness of detail, quality and richness of character and the unexpectedness of aspects of the characters, so it doesn’t feel like you’re just picking tropes off a shelf.

With Conversations With Friends, Frances is an unusual character. She’s both infuriating and amazingly appealing, she’s blind and insightful at the same time. There’s an essence of adolescence in her as well as somebody much more sophisticated. The richness of the way Sally has decided to flesh out those internal struggles is through these other characters, all of whom, are quite unusual. You have a man in Nick who is very attractive and in ways very strong, but also failing as a person. Even though he’s older, it’s Frances who has the power within their relationship. All of those things are unusual and stop you falling into thinking you will know what this story is going to be, it keeps you awake and alive as a viewer.

Also, having these amazing, charismatic and clever actors playing material that’s subtle and rich is a combination that leads to something that’s fresh and doesn’t feel like you’ve seen it before.

The relationships between Frances, Bobbi, Nick and Melissa are quite interweaving and exposing, can you tell us how they force the characters to address their own sense of self?

Every relationship a person has illustrates things about all of their relationships. Frances and Bobbi are in this frozen state where they were together when they were younger and have never addressed why they broke up. They’re deeply close and connected as people but are somehow not fully communicating, and there’s a danger in which Frances is taking Bobbi for granted.

Then she has this relationship with Nick in which she allows herself to assert herself more – it’s a clever choice by Sally, that the place in which Frances accepts her power as a person is with an older man. In the relationship with Bobbi, Frances does this interesting thing of idolising her so much that she becomes afraid of how Bobbi will judge her and that causes her to be self-protective or closed, and to Bobbi that feels like rejection.

Through expressing what she wants and accepting that she has agency and is a powerful person in her own right, she’s able to go back and be more direct and real with Bobbi. With the Melissa and Frances relationship you have this older, successful female writer – which is what Frances wants to be – and she gradually understands her initial anger towards Melissa to be a deep jealousy or dislike of her, which is subtle but present.

What do you feel each cast member brings to the series?

The first person who announced themselves was Alison Oliver for Frances. We got a self-tape and all felt she absolutely had the music, sound and feeling of the character in the most interesting way. Then finding a group that makes sense around her and make sense in terms of their own relationships with each other was a long process.

Joe Alwyn was the next person to be cast. For the character of Nick, you could easily fall into a cliché of what you’d expect of a slightly older man and a younger woman, but Joe brings vulnerability, softness and richness of character which made it exciting to imagine scenes between those two people, and also scenes between him and Jemima Kirke’s version of Melissa.

In the novel, you’re looking at everything from Frances’ point of view and that means you’re getting her flattened version of other characters. Melissa is an antagonist to her, and therefore that’s the aspect of Melissa we see, whereas when you film something, the whole person is there and you want to round that out.

Melissa is s described in the novel as being incredibly charismatic, intelligent and funny – that’s talked about, but we don’t really hear her voice so there’s a wide open space when it comes to casting. What you need is somebody with an intense presence, and that’s Jemima Kirke. She’s such a particular presence on screen, is so clever as an actor and isn’t that cliché urban, sophisticated literary figure that you might otherwise cast by accident. She’s quite spiky and there’s a notion of complexity that she brings to it.

With Bobbi, Frances has this habit of idealising people or emphasising their specialness, so Bobbi is a kind of creature in the novel that has this immediate effect on any room she walks into and is effortless and bulletproof. It takes the experience of reading it to realise how central and soft emotionally Bobbi is, so we had to find somebody who could play the shimmering Bobbi, but also bring that soulfulness to it. Sasha Lane was amazing. The scenes between Sasha and Alison are special. We were very lucky to find those actors.

Could you tell us the process of filming the intimate scenes, were there any learnings from Normal People that you took through to Conversations With Friends?

Having gone through Normal People and thinking hard in advance about how we would film these intimate scenes, I was very keen right from the beginning that they didn’t feel like some other type of filmmaking, instead, feeling like a continuation of the drama. We went on a big journey in Normal People, discovering this new role of intimacy coordinator that was out there, but barely known of, and working with Ita O’Brien, who was central to the development of that role.

Through doing that we learned the way of shooting intimate scenes in a way that makes the actor feel safe and creatively involved. There’s a dignity to that process and there’s the safety of having somebody on set who knows all about the basic stuff. The intimacy coordinator is like the stunt coordinator in the way they are there to keep people safe; we were all very comfortable about that process and it was about bringing these new actors into that way of working. It felt very smooth and I hope it will continue to be something we do when making films and that it’s not a big new discovery every time. It’s best practise and we’re going to continue doing it.

The score and the music choices in Normal People was a big thing, have there been similar choices in artists and working with Stephen Rennicks on Conversations With Friends?

The approach to music has been quite similar. The soundtrack is a combination of Stephen Rennicks’ score – which is consistently beautiful – and commercial tracks that we’ve chosen.

The score is the internal soundtrack, it’s thematically important and does a lot of the creation of space and mood. We’ve also continued to use lots of Irish acts, as we did on Normal People, because there’s so many interesting people making music here. We’ve also got some established international artists. I hope people discover some amazing artists through listening to the soundtrack for this.

What do you hope audiences will take away from Conversations With Friends?

I hope audiences primarily feel invested in these characters; Frances’ change and her growth as a person. I hope they feel as captured and captivated as I did when I read the novel. It’s a strong piece of writing and I hope we’ve done it justice. I hope people are moved by it in a similar way, but not identical, to the way people seemed to have been moved by Normal People.