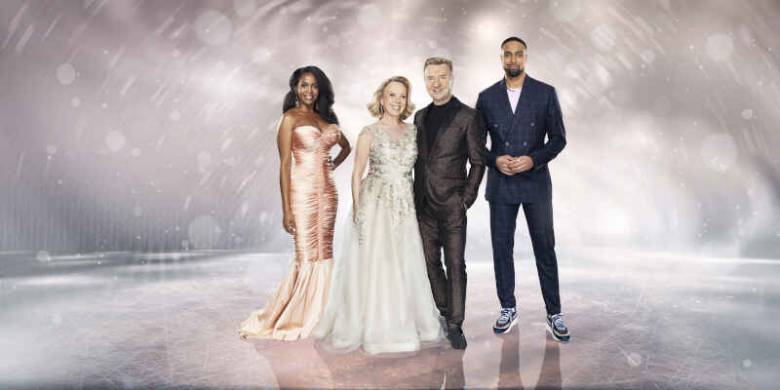 How does it feel to be returning to the ice panel?

I always love the start of a new season, it’s always exciting. It’s like starting school again to see who all the characters are and who’s going to do well. Having said that, this time we have had some sneak peaks and I have to say the standard looks really high, I know we say that each year but truly, the majority of the celebrities you just can’t call it at this early stage.

What can viewers expect to see from the new series?

I think what we’ll see is the real unison of the couples because their abilities are already good. As they progress they will want to push themselves more and more with the choreographically which will make for some great dances.

Do you think as so many are so good, that it will be close competition each week and one more wrong could be the deciding factor in someone leaving the show?

Absolutely, the standard is so high we will be watching for any little mistakes, any chinks in the armour you might say. Everybody will be wanting to put out their best performance each week because if the standard is higher obviously as judges, we are more critical.

What do you think of this year’s line up?

I think it’s a great line up. Very excited. I’m excited to see Brendan Cole on the ice. Previously, we’ve had a ballroom dancer win the show. To begin with, Brendan found it completely different and difficult because he wants to dance and yet he’s got to learn to skate first. He’s of that mindset that he will make that happen, he’s very determined. Kimberly (Wyatt), who is a natural dancer, has the ability and flexibility so we’ll definitely be seeing some different kinds of moves from her and her professional skater Mark Hanretty. Regan (Gascoigne) is a trained dancer in ballet, musical theatre and contemporary and he’s already a good skater. We saw him at the bootcamp and he just seemed a natural on the ice. Already you can’t discern between those three as to who is the front runner.

All those three have a dancer background, do you think this gives them an advantage?

I don’t think it’s an unfair advantage being a dancer, look at our past winners Joe Swash beat Perri Kiely who is a trained dancer. Certainly if you are able to find your feet on the ice and you have dance in your background, it’s going to help you but then personality can come out like with Joe. I think he won viewers over after he skated as much as with his skating.

What do the celebs have to do to impress you this year?

With the standard so high amongst the celebrity skaters, are you excited to see what they might be able to do in terms of their performances?

I think looking at all of the characters that we’ve got whether they have a dance background or not they’re all going to bring something unique. Let’s talk about Bez, he’s definitely going to have his style. He had a style of dancing that he has honed that he will most certainly bring to the ice.

We have a high level of skill going into the show as a majority of them have found their feet and are getting more and more comfortable on the ice. I can see the determination, they are all enjoying it and they want to do the best that they can do. Their skill level is high which is going to make for an exciting competition.

Is it exciting as a judge to see what they are going to be bringing to the ice each week?

I think it’s going to be exciting each week as the competition will be close. Everybody will be looking for their own originality, bringing their own set of skills to the ice and personality. From a judging point of view you’re looking at those little things that make one stand out over the other. It can be from their technique, their presentation, their personality on the ice, how well they sell the performance, all of these will be factors.

What is it that you are looking for in a performance? What would give you goosebumps?

Something that’s exciting and daring and something that looks beautiful at the same time. A slow emotional performance can grab you just as much as a fast exciting performance with lots of tricks. If the standard is so high it will be hard to discern one from the other, so it could come down to the personal likes on the judging panel.

How thrilling is it when someone does something that really pushes the boundaries? – for example, when Perri did a backflip?

When somebody does that, it’s a real sense of achievement that four months before they hadn’t even skated. To see the progress and their ability and their daring to actually put that together, it’s really exciting. Ice is so unforgiving, it’s not like you’ve got the friction of a dance floor, ice is slippery and they are on thin blades. I don’t think any of the celebrities will go out there and say that they feel comfortable doing this. All their stomachs are churning but those that start to enjoy it are the ones that are going to come through in the end.

As you know the risk levels involved, are you on the edge of your seat when you hear someone is going to attempt a particularly daring move?

Yes, when you know there is a big trick coming up and the odds are say 50/50, Jayne often grabs my hand and squeezes as they’re coming up to that move. We are willing everybody to do the best that they can do but it’s live on the night and you never know what you’re going to get.

You seem to still challenge yourselves this many years into skating for you and into Dancing On Ice you always bring something different. This year we hear there’s to be a performance shot entirely on a drone. What will that mean for the viewers? How does that inform the choreography of the routine?

There are three of us in this relationship. Andy who’s this amazing drone operator and it’s not a drone that he’s watching with his eyes, he’s seeing it through the camera. He wears these goggles and he’s had to learn the routine with us. We’ve talked about the flight path and it’s not just two dimensional left and right, back and forwards its up in the air, turning over, coming back round and that’s what we want to do, we want to create something visually different that’s never been done before, so working with the drone is definitely doing that.

Where did this idea come from?

It’s never been done before but it’s something that I’ve wanted to do. I’m a bit of a techy person myself and I loved the idea of trying to create pictures differently. We did it a year or so ago with a single camera move and the cameraman was a skater on the ice with us but the drone will give us more scope as it goes up into the lightning rig and back down buzzing around us. Perspective is something we haven’t seen before and we choreographed it with the drone in mind. One move that we do, called The Plank, where I’m holding Jayne and she’s parallel to the ice and with about 10 inches off the ice, viewers will see the drone pass underneath her. It’s going to be exciting to watch.

We have a new panellist joining the panel this year – what do you think they’ll bring to the Ice Panel?

We’re all excited that Oti is joining the panel, she brings knowledge of dance, she’s a wonderful ballroom dancer, she’s a performer and I think she’s a really good fit. She’s young and vibrant and brings livelines to the panel.

What advice would you give to her?

She might be nervous about not knowing technically what’s happening with the skates but it won’t take her long to see who are the better skaters. Skating is movement as is dancing just a different form of movement but your eye trains to it fairly quickly. We’ll obviously steer her with what we see on the ice, but in the end she will make her own judgement of what moves her.

You’ve danced for her before of course – albeit whilst dressed as a Beagle! – are you looking forward to being on the same side of the desk this time?!

Yes I don’t want any floppy ears this time.

What advice would you give to this year’s contestants?

Don’t get complacent. The thing about ice is if you have a lapse of concentration it can bite you quickly. Stay focused, stay concentrated, stay hungry and enjoy it at the same time.

Will you give them any little non-ice-skating tips?

Anything like – bring a flask of tea because it’s cold in the studio?! Or do you all have blankets under the desk?! Jelly babies, Ashley and Jayne like Jelly Babies, I don’t mind a jelly baby but I’m more of a Trebor mint man myself.

What do you love best about being on the panel?

We’ve done every aspect of Dancing on Ice and we feel very proud that we’ve built the show from the beginning and to still be a part of it, to still be able to skate but at the same time now being on the panel. You’re giving the skaters critiques, you’re not trying to critique them down, you’re trying to offer constructive criticism that hopefully puts them in good stead for the next week. We’re trying to build confidence, give them advice and hopefully they take it on board and come back better the next week.