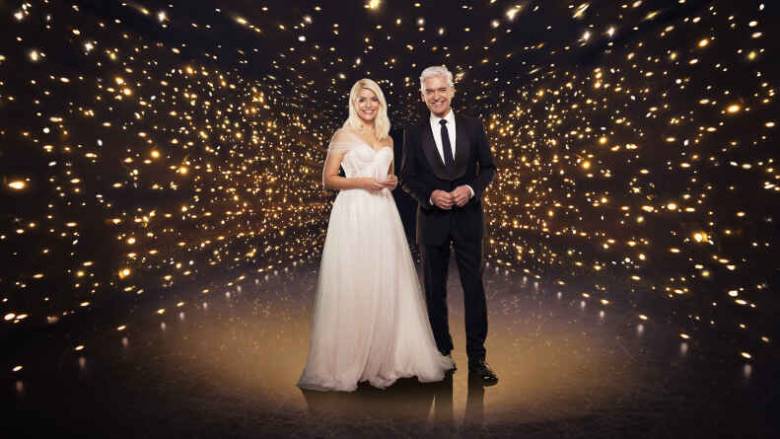 Are you looking forward to the new series?

I can’t wait, we are looking forward to getting back to the side of the rink and having a bit of glamour and getting dressed up.

Last year was great though.

I think we did really well and we adapted the show and it adapted brilliantly to what we faced. If you didn’t know you wouldn’t necessarily know but I think it was that tension for everybody, thinking ‘are we going to get through to next week’. You just want to be able to enjoy the show and the team behind Dancing on Ice are so creative and they just want to put on a show that just really entertains.

What can we expect from the new series?

Well from what I’ve heard I think the standard is going to be incredible. Some of the line-up are dancers, so I think already they will know how to place their hands, it doesn’t mean it’s any easier for them because James Jordan who is a dancer said it was really difficult because he had to unlearn a lot of his techniques because on the ice it’s very different. I think when it comes to performance that will really enhance their routines, there is no doubt about it. Also, I think there is going to be some fun on the ice, Bez isn’t a famous dancer but a dancer in a different variety. Personally he’s the one I’m looking forward to the most.

Is he the one you are most looking forward to watching?

Yes I think so, I also think Kimberly Wyatt is going to be incredible, I think she’s going to be beautiful to watch. It’s always quite interesting to see a professional go from the teacher to being taught so that will be an interesting one to watch. Rachel Stevens is used to performing but I think it’s one thing performing on dry land, but for all of them to be brave enough to do it and to partake because you can’t do this by halves you’re fully in or you’re not because you can’t just go, I’ll turn up on the night’ the dedication that goes into this is huge.

We have a range of ages on this year’s show from Kye Whtye and Regan Gasgiogne to Sally Dynevor. What do you think about that?

Sally is an absolute icon when I heard (she was taking part) I thought it was incredible. I hope she really enjoys it. I think a lot of people are drawn to the show because of Torvill and Dean because they are such massive icons so therefore you go, ok to be taught by them and have their input in what I’m doing, it’s a once in a lifetime opportunity.

We have got Oti Mabuse joining the panel.

I think Oti is going to be fantastic. I am a huge fan of hers on everything she does, I think she’s got a wonderful energy and I think she will bring that to the ice and will be a fantastic addition to the panel.

What advice would you give her?

I honestly don’t think she needs any advice. She’s one of those people that whatever she turns her hand to she excels at and we know she’s a brilliant teacher and gives really good guidance. I think being a judge is all about giving guidance because you give those scores in order for them to go away and work on something and come back the next week, so in a way she is still going to be teaching but just in a different way.

We have themed weeks throughout the series, are there any in particular that you are looking forward to?

The ice might be cold but sometimes it can get hot on the ice between our couples, we’ve seen former stars Brianne Delcourt and Kevin Kilbane have recently got married. Do you like seeing that on the ice?

Yes definitely, there is nothing better than that when people actually start falling in love. Who knows if it’s going to happen, I don’t know why it happens, I think we have a great success rate and obviously Brianne went on and had a baby so yes I think watch this space.

What’s the one skating move you always look forward to seeing?

Instantly my head went headbanger but I don’t. I hate it. I absolutely hate it. I can’t bear it. I end up watching it back afterwards. I’ve never watched one live. I will not do it. One of the worst moments was when somebody did it in the skate off last year and Phil and I now stand rink side because normally I’m off set and I was like ‘oh I’m just standing here and they are doing it right in front of me.’ I love it when the skaters do a move called a Roll Up, I think because in my head I’m thinking they can pick me up and do that.

I don’t know, I’m so impressed with whatever they do really, maybe Kye could get his BMX on the ice. I’m sure there’s a way to do that, we’ve had a motorbike on the ice before. A bit of cycling on the ice that would be new.

If you were a contestant on the show what would your signature move be?

Sleeping, lying very flat and low and safely touching the ground. The end of Bolero, that’s my move.

Can you tell any secrets from the show, what goes on in the ad breaks?

Last year because of Covid we weren’t allowed a wrap party so I snuck in two of my kids water bottles with their names on. Nobody could see what was inside it, and I filled them up with gin and tonics, one for Phil and one for me and in the last ad break before the end, I was like, ‘we can bring out the gin now.’ We both sat there, I think Phil had a Chester bottle and I had Belle’s and we sat there and had a gin and tonic. We don’t do this on every ad break but for the final there was no wrap party and after the last series we all needed it.

Are you ever tempted to take to the ice on the show?