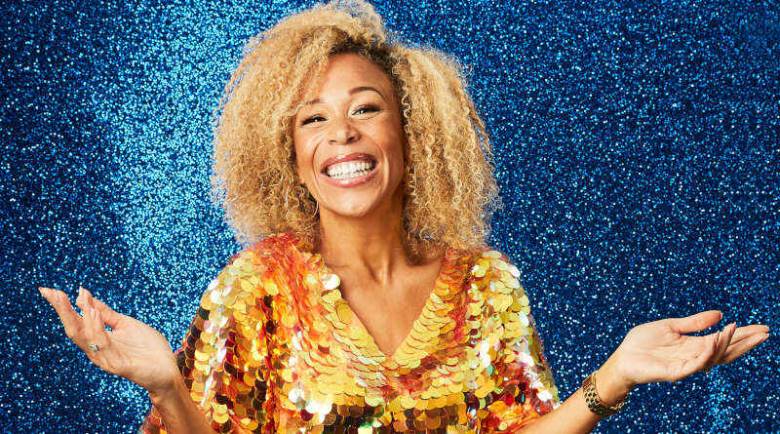 What’s the biggest appeal about doing the show?

It’s ITV’s biggest, sparkliest show ever so that’s a big appeal. I’m such a girly girl, I love all the glitz and glamour of it and I also like to push myself to do new things. This is an exciting challenge where I’m hoping to go on a journey and learn more about myself.

Have you watched over the years and always fancied having a go?

I have. I never thought I’d be asked to though! It’s such a privilege to be asked and I’m thrilled to be part of it.

What made you decide to take part?

It’s such an opportunity. It’s always a really aspirational and uplifting show at a cold time of year when there’s nothing much fun on the telly so what an opportunity. I jumped right at it!

Have you skated much before?

As a kid my grandparents used to take me to Bradford Ice Rink in West Yorkshire. It’s a very nostalgic thing for me because of those memories but as an adult? Goodness, the last time I went was probably about seven years ago at the Natural History Museum and I think I did more drinking of mulled wine than skating. It’s going to be learning a new skill and learning how to skate properly which I think is really cool.

What are you looking forward to most of all about learning how to skate with a professional partner?

Exactly that. I’m being taught by world class champions which is fantastic. I think it will be a unique experience to push myself in doing things I’ve never done before. Also, I think when you watch the show as a viewer you see people go on these amazing journeys and do these extraordinary lifts and things so just to get a chance to have a go at that and maybe be good at it will be pretty fabulous.

Are you up for all of the lifts? Headbangers, the lot?

I’m up for most things. Not the headbanger because I like my head on my neck! My face is my work so I’d like to keep it intact. Everything else – I’m up for it.

What’s the scariest thing you’ve ever done prior to this?

I’ve just recently jumped off Tom Daley’s ten metre diving board at the London Aquatic Centre which after doing, half of his training squad said they’d never dived off themselves yet. That made me think good God Ria, you do scary things sometimes. That’s quite extraordinary. The Olympian Michael Gunning messaged me and said – Ria, you should be really proud because I train in that pool and I’ve never even dived off that board. That’s when I realised that was mega.

Of course your friend Alex Beresford has done the show before, have you spoken to him about it?

Yes he has! I put my detective hat on and I’ve been asking him questions about it. He genuinely said it was one of the best experiences he ever had, he said everyone was lovely and he had a brilliant time. That reassured me that there’s nothing to worry about, it’s going to be a really positive experience and it’s going to be fun.

How competitive are you feeling?

Well, it’s funny…I don’t think people like competitive women. If we’re honest. But what I’ve realised about myself is that I am competitive. It was when I started presenting Sunday Morning Live with Sean Fletcher. As part of the show they’d get us to do some sort of interactivity and it was then I realised this strong sense of ‘I want to win!’ And then doing these challenges with Alex on All Around Britain, we just poke fun at each other and have a bit of an adventure. To be honest with you I don’t think it’s even about the other people taking part because I think we’re all going on our own journey or what we’re capable of doing and how you push yourself and deal with falling and failure. I’m going to go on this ride and just be kind to myself and just go for it and do the best I can. That’s all I can do.

How do you feel about being critiqued by the ice panel?

With me, I’m a human sponge so I’m going to absorb what they say and take it on board and do my best the following week or if I’m in the skate off.

Do you have any specific fitness goals?

Well, me and my daughter Lula have set ourselves the challenge of learning how to do the splits. It’s something I never learnt to do as a kid and she’s come back from nursery and is trying to do it. So, we’ve got some yoga blocks and we spoke to a coach at the Aquatic Centre so we’ve been practising. It’s a daily thing isn’t it, just practising and getting that flexibility. And for me learning to do amazing lifts properly and to spin – all that will be great.