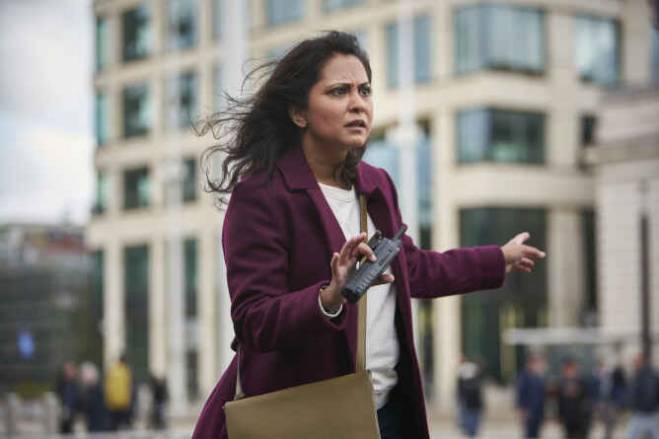 What initially appealed to you about this show?

I think just hearing that Jed Mercurio was attached to it! I’ve been a huge fan of his for a long time. And then obviously when I discovered Maya was writing it, I knew it was going to be of good pedigree. I live in LA now and it’s not always easy for me to make decisions about being away from home, but I just felt like this project ticked enough of the right boxes for me. I didn’t quite realise how much hard work it would be – I was in almost every single scene, but I was in good hands.

How would you describe Rachita?

She’s definitely strong – she wouldn’t be able to do half the things she does, or get where she is in her career, without tenacity. I think she’s conflicted about her own identity and the piece raises a lot of questions about what happens in the workplace, and whether she’s hired for a case that’s culturally specific or if she’s hired because of her ability, that’s a constant question in her mind. But as a detective she’s just persistent and hard-working, she doesn’t stop. She’s like a dog with a bone and she’ll keep asking questions to get to where she needs to be – she’s like a female Columbo in a green coat!

How would you describe her home life?

She’s happy, she’s got lovely Jamie Bamber at home! There’s an amazing rapport with her partner, they met coming up through the police ranks and they have a lot in common. There’s something about her that doesn’t want to leap into having a house together – I don’t know whether it’s because she feels it would mean the loss of her own identity or whether it’s about her sense of being independent, but they do get to a crossroads. A wrench is thrown into the middle of all of this that makes her question what she wants and things unravel.

It’s nice that she has a happy home life. It’s funny because I re-watched Prime Suspect recently and Jane Tennison went through one relationship after another, didn’t eat much and drank a lot of whiskey. Rachita’s life is very different, she’s got a lovely house and all the things that you would want out of a relationship.

Rachita suspects she has only been promoted because of tokenism. How does she cope with that?

It obviously makes her heart sink, wondering if that’s the reason she got hired, but this is still what she does for a living. The case has been assigned to her and she doesn’t shy away from her work, she’s going to do it to the best of her ability. It throws her off slightly and she knows that she’s probably going to have to work twice as hard as anyone else, but that’s just who she is. She knows what’s going on, and there are passive aggressive moments, but she can’t let her ego get in the way of what the job involves right now, so she holds her tongue and she won’t say anything overtly. It’s not going to get you anywhere – if you say something then people will just tell you you’ve got a chip on your shoulder… it’s just not helpful.

Yes, it’s those subtleties that we probably haven’t seen much of on TV, I can’t think of any examples off the top of my head, I don’t think we’ve seen a lot of what happens day to day. The other day I went somewhere for work, I’d been there four times and the person still kept misspelling my name. It was just like “Come on man, again!” Rachita has a similar moment when her lanyard gets mixed up, and she is given somebody else’s. She’s like, “You can see it’s not me, if you just looked closely”. I can’t think of anywhere we’ve actually seen that represented on TV. I remember on ER, I’d speak to the writers about this quite a lot, and we included some moments, like when a patient would tell my character, “You speak pretty good English” and I’d look at her and say, “Yes, better than you probably.”

Rachita’s thing is that she’s part of a whole generation of people born and brought up in the UK who see themselves as British. I’m British but you still have those stumbling blocks. With Rachita she also has to work twice as hard to be recognised for the work she does.

How does it feel to play a trailblazing female lead character?

Rachita is a really good, meaty character and to me it’s all about finding this woman’s place in the world. You don’t often have an Asian female lead on TV – it’s starting to happen more, but having been in the business for so long, I feel like I’ve been saying the same thing for a long time. I can see the change with the likes of Bridgerton, but in DI Ray this is my generation of women, we’re in Birmingham and it’s so relatable – it’s nice to play. That was the main appeal for me that I’m not playing the best friend of somebody or a secondary character, it’s all about Rachita.

One day I’d love to play a character who isn’t thinking about her identity – Bend It Like Beckham was about her identity too. But those parts are really hard to come by or don’t get made very often. DI Ray is just so well-written, Rachita’s interactions with people are really great and I loved playing a strong 40-something woman on the show, helmed by these people and telling this story.

How did you find playing a detective?

Oh my God, the scenes where I just have to give lots of information were sometimes really hard to play, because it’s not coming from a place of emotion. You just have to reel off certain things in a particular way. I know in real life cops don’t say things that fast, but when we get to television you want the character to look quite slick. I had to do a whole speech reading out number plates in the phonetic alphabet and I was having such a hard time with it, it took me forever to learn!

Then we had the chase scenes – I think in my head I was Superwoman, but in reality not so much! It was like doing a HIIT workout for five hours. I remember running and running through Grand Central Station and wow, my thighs… I wasn’t too happy by the end of it but in the moment I felt like Tom Cruise! I was bolting down platforms, and people were like, “Who is this crazy woman?!” I’m in decent shape but it was knackering. It’s fun when you start and you really go for it, but there’s one scene where I’m supposed to go up these stairs two at a time. My thighs were like, “No, not again!” and I was getting slower with every take, I looked ridiculous. By the third time, the stuntwoman was advising me to hold on to the bannister! Luckily the costume lady gave me really comfy shoes.

Gone are the days when I used to insist on doing my own stunts. Now I look for the stuntwoman and thank her profusely for making me look good. I don’t want to take her job away from her!

Was it fun to return to the UK for filming?

Yes, actually my last two jobs have been in the UK. I did Intergalactic for Sky, then I literally left in the March when the pandemic started, got on a flight back to LA and didn’t leave or do anything else for 18 months. Then this job came in so I flew back to the UK. The jet lag kills me, but we filmed in Birmingham, which is just an hour away from my family and that was amazing. There were moments where I could just pop in a car after work and drive up to see my mum for some home cooked food, it was so lovely. My niece had just been born so I got to see her and hold her too. I don’t have a physical home in England, but my family is there so it does feel like home.

It was amazing playing a character from Leicester, so I didn’t have to worry about how I sounded, I could literally just lean into my Leicester accent. In other roles I have to do RP [received pronunciation], and I don’t think my accent is ever on TV, other than with Gary Lineker! It was very liberating because I could just get on with the character rather than worrying about the voice.

There was one funny moment where I was driving for a scene, and I had to pull off to a slip road. I pulled off to the right thinking I was in America, because I’ve lived in LA since 2003 and then they had to tell me I was going the wrong way!

Did you enjoy working with Jed and the team?

Yes, there were a few times when Jed was on set and I was a bit nervous at first! But you can see his brain ticking away and it was a real collaboration. It was really about making all of the scenes work, and if there was a question then we would work out how to fix it together. Jed has so much experience in making thrillers, and creating suspenseful moments, and we were working with Madonna Baptiste from Black Mirror, so it was a thrill seeing her, and working on the nuts and bolts of the scenes. It’s a good day at work when you’re all singing from the same hymn sheet.

I don’t know how Jed does it, he makes me feel so lazy, because he was working on so many projects and he had a great sense of humour too. I only knew Maya from seeing her on Line of Duty, but it was just so lovely to meet her and be part of her passion for the show.

I hope the audience enjoys watching Rachita, that they get caught up in her journey and the suspense of the show, the thriller aspect. I hope they get wrapped up in what’s going to happen next, and hopefully in good Jed Mercurio style just when you think one thing is happening, it won’t be what you thought it was!