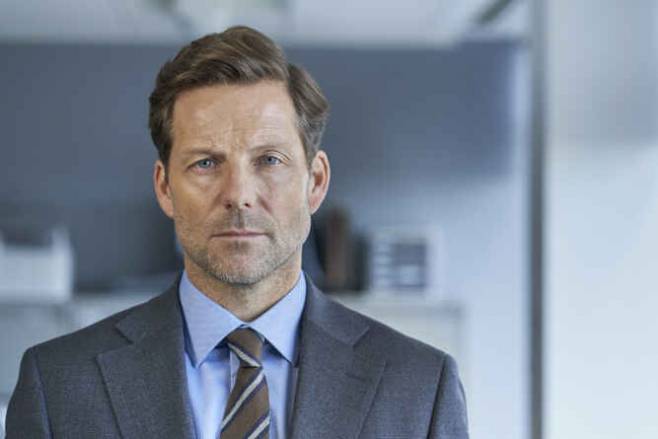 What attracted you to this series?

I knew Jed a little bit because we play golf at the same place in Richmond and have the same circle of friends, but I’d never worked with him, and then I got sent the DI Ray scripts out of the blue via my agent. I was immediately drawn in by the sociocultural, racial angle within a familiar cop show genre, and the character of Martyn is enigmatic enough to be interesting to play, with a nice arc through the series, which is what I look for. Obviously, the idea of working with a quality cast led by Parminder was enticing as well, and Jed’s name is synonymous with television success at the moment, so it’s exciting to be associated with that. Jed and I have formed a friendship since filming and he’s a great guy to work for.

Tell us more about Martyn

You meet Martyn at an awards ceremony where Rachita is receiving an award. He congratulates her, and then there’s a reveal that actually they’re in a relationship, which they’ve been trying to keep secret because of work politics. But he’s pretty keen to make it official and to let it be known that they are an item, so he proposes to her early on in the series. They are in the early stages of introducing each other to their families and coming out as a couple.

Martyn is very supportive of Rachita. At the start of the series, she’s in a difficult transitional moment where she’s been promoted and she’s nervous. She is launched straight into a suspected “culturally sensitive homicide” case where it is assumed that her South Asian heritage is going to be important. She immediately has a feeling that she’s been thrown into the deep end, and the case isn’t what it seems. Martyn is a sounding board for Rachita and he tries to help steer her. He’s a senior officer of high rank so she looks up to him professionally, but they are equals in terms of their relationship at home. It’s a mature and healthy relationship.

How healthy is their relationship, given how secretive they are about each other?

Well, it may seem dodgy that they’ve kept the relationship quiet, but they’re trying to stay professional in a workplace environment. It’s pretty tricky to juggle a professional and a personal relationship, so they’ve been quite wary.

Work issues do take their toll. Inevitably, when your partner is a senior police officer, and you’re having issues with your direct boss, you can’t help but bring that home and gradually Martyn can’t help but be more involved with the case, just because of the personal toll it’s taking on Rachita. The case is also putting her in harm’s way, and he tries to protect her and encourages her to take a step back. In his eyes, he’s got her best interests at heart, but maybe in hers there’s something a bit patronising about it.

The drama deals with Rachita’s struggles with identity and racism – does that factor into their relationship at all?

No, they’re not worried about that. Martyn is from working class roots, and he’s climbed up in the police force. He sort of prides himself on having escaped his background from a small suburban town, which was probably quite white and homogenous. So maybe there is an aspect to the relationship of feeling very alive to being without prejudice, to being modern, and progressive. I think he prides himself on the fact that he has no issue with being in a mixed-race relationship, he’s totally happy and comfortable in it.

But within that sense of satisfaction at his own progressiveness, there’s the latent hint of an awareness of race that is a hangover from a slightly prejudiced background. It’s the deliberate effort to be colour-blind, something that is quite a touchy subject these days. So, the idea that we don’t see race can be seen as problematic, because race is a factor in society and to deny it is maybe denying how far we still have to go. I think that probably encapsulates where Martyn is – he likes to think of himself as extremely supportive of Rachita, as non-judgmental and a very modern man.

The series does explore the nuances of racism in modern society, doesn’t it?

Yes, the wonderful thing about Maya’s writing is that these little passive moments are worn very lightly. Sometimes, you wouldn’t even be sure to call them racism, but they’re the lingering whiff of a prejudice that’s been long embedded in British post-colonial society and still lingers despite people’s best intentions.

With DI Ray, you’re not really aware that you’re watching a drama about prejudice within society, it’s very subtle in a way that’s actually more akin to most people’s experience of racial prejudice. You’re just watching a really good cop show, but you’re also understanding that for this particular character, she has to navigate more than just the usual office politics. It’s really nicely done so the audience doesn’t need to feel it’s watching something worthy with a message. You’re just watching a woman in the modern world try to navigate a particularly tricky investigation, which is made trickier because of everyone’s sensitivities around ethnic differences.

It’s a Jed show, so remember there are lots of twists and turns and cliff-hanger elements. It’s a ride and the series is a thriller at heart, but with social awareness of something broader and more substantial. That’s the magic of what good thrillers can do – they can really entertain you with a ripping story, but also make you think.

How did you and Parminder work together to establish Rachita and Martyn’s relationship?

It’s always a challenge, creating a partnership with another actor, and a source of nerves and anticipation as you don’t know quite how you’re going to get on or whether your working methods are similar. But we got together in Birmingham for an afternoon just before filming, so that we could really establish that relationship.

I’d never met Parminder before, but it was very apparent immediately that she was a very warm, funny, engaging person and we clicked effortlessly I’d say. It was great to have that afternoon just to make sure that we were on the same page. It was great fun. I’d like to think I made her laugh and she certainly made me laugh.

I lived in LA for the best part of 12 years, so we had a lot of geography in common – for all those years she actually didn’t live far from me at all, and her son goes to the neighbouring school my kids went to. I’m sure we crossed paths many times without really being aware.

Is it unusual for you to play the supporting role opposite a female lead?

The only roles I’ve had recently are this way around, so things are definitely shifting – the profile of women on TV dramas is definitely rising and rightly so, it’s been the other way round for so long. But the last half dozen television lead roles I’ve had have been as the partner rather than as the lead.

Did you enjoy shooting the series in Birmingham?

Yes, I’d never worked in Birmingham before, so it was a bit of a revelation actually. I can see that the city is going through a real moment, there’s so much building and regeneration in central Birmingham in particular. There’s fantastic architecture and I really enjoyed strolling around the city getting to know it. I’m sure more and more productions will go that way. A lot of our cast were from the area, so it was nice to hear their stories.

You’re always busy – what do you look for in scripts?

I wish it was the case that I was always juggling offers, but I feel like I’m busy enough and I’m lucky in that I don’t have to just say yes to anything. It’s never perfect – there are many jobs that I would love to do that don’t come my way and those are the frustrations of this job – the grass is always a bit greener somewhere else. But recently, I’ve been blessed that DI Ray was a real pleasure to film. I really did enjoy it and I’m fascinated to see what the public makes of it. It’s an interesting one to me, because ITV does cop dramas so well, and this one has a cultural element that I think elevates it.

How does it feel to be back in the UK after so many years in LA?

It’s double-edged because I’ve got great memories and great friends over there, but America has not gone through the greatest years. I’m not sure if it was something I said as I was leaving, but it seems to have gone wrong a little bit. When I go back there are real tensions politically, so I’m quite happy to be a Londoner again. I feel very comfortable here, we’ve just bought a lovely house and the kids are in local schools before going off to British universities in an education system that I understand and trust. So now I sleep very easy and I love being in a city with so much to offer culturally. The work environment is exciting here too, London is becoming a go-to destination for a lot of American productions, so I don’t feel I left that circus behind.

But there’s a nice anonymity here in the UK. In LA you can’t escape the business – when you’re not working and you’re feeling a bit grumpy and sorry for yourself, you can’t get away from the conversation. Even your dentist will be an expert on what’s on TV and who’s been commissioned, and he’ll tell you about another client with a hit show while you’re sitting there with a drill in your mouth, wondering what’s gone wrong! I coached my kids’ football team as an outlet, but even then there’ll be another parent who is a make-up artist and your Uber driver has a script in his glove compartment, you can’t run away from it. Whereas actors aren’t a topic of conversation in London!