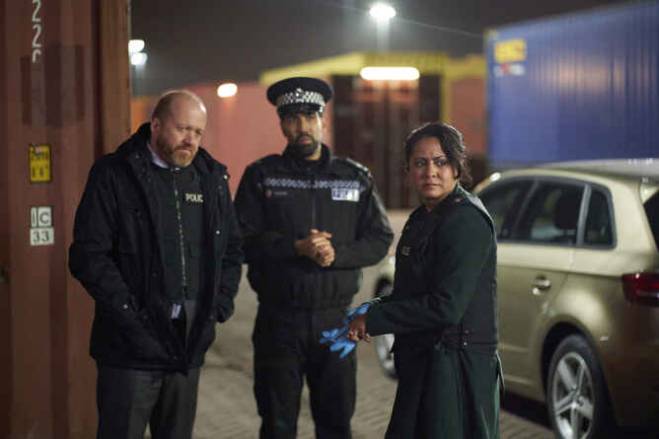 How did you end up joining forces with Maya to create DI Ray?

Maya and I started working together a few years ago when she left Line of Duty and she wanted to focus on her writing. We were at lunch during filming, and she just said, “In the next series, I’d love a meaty death scene”. So that was it for Maneet! It was easier for me than having to force a character death on an actor. So, we talked about giving her a really strong arc into the death sequence so that it would have the maximum impact. But there was also a conversation about what might be next, because we all loved working with Maya and we were sorry to lose her from Line of Duty, so the fact that she was really throwing herself into her writing was great.

Maya had been writing episodes of existing TV series and wanted to develop her own original series, so she created a really great script, but we just couldn’t get the backing to make it. Then we talked again about trying to find something that could work for a mainstream audience, but would still give a platform to the things that Maya was really interested in writing about. Something that would allow her to write from her own unique perspective about her heritage and being British born, and feeding all that experience into the distinctive voice she has as a writer, and DI Ray was born.

How important is it to showcase authentic voices like Maya’s?

I think it’s essential in our industry that we give a platform to people who have different experiences and are able to really talk about things that actually apply to so many people in the UK, but maybe aren’t necessarily reflected in our programming. I grew up in an immigrant family, and watching TV it was really clear in the way that certain subjects were addressed that the people making the programmes didn’t imagine we would actually be watching TV and hear ourselves being talked about in that way. That has obviously changed, and it’s great that it has, but we can always do more, particularly when we’re looking at mainstream TV.

I think that’s also a really important consideration with DI Ray – we wanted it to have mass appeal and that’s why it became a crime drama so that Maya could tell her story. We knew that if Rachita’s story was set against certain genre expectations it would be attractive to a larger audience. It was always the ambition that we would create a TV series that would work as a crime thriller to appeal to a mass audience, but also had something to say about subjects that aren’t necessarily dealt with very honestly in mainstream dramas.

What makes police dramas so compelling?

Well, I think it’s a very recognisable world to the audience. So, they immediately have a suspension of disbelief, knowing that the police exist in the real world and it’s their job to investigate crimes. I think there are huge advantages to doing a crime story as a police procedural.

When I first started writing Line of Duty, I’d never written a police drama before and the first few months of trying to crack the script involved me looking up the absolute basics of police procedure and reading around the subject. It was only when we got into season two that we had day to day input from police advisors and I had lots of conversations about their work. So we just gave Maya a crash course in that, and we introduced her to some of the advisors I’d worked with before who are really great at talking through how the police in the real world go about things.

It feels rare for a drama to tackle racism in this way, would you agree?

Yes, it was a really important part of the ambition for this series. We’ve obviously seen police dramas that were either set in the past or made in the past, when there was quite overt sexism, misogyny and racism displayed by the characters. And they did it because they didn’t feel that they would ever be held to account by their peer group. While that sadly still exists within our institutions, it now exists in WhatsApp groups rather than being overt, because those people know they’ll be challenged. So it didn’t feel like we could take that route, but it was really informative the way Maya talked about the subtleties of certain encounters, when she found herself unsure afterwards if racism was involved, because it’s in that grey area. That’s something that’s part of her everyday experience.

It was really important for this project, that we were true to Maya’s vision and that the lead character would be representative of her lived experience. We’ve been incredibly fortunate to cast Parminder. Also, I think there is diversity on screen cumulatively now, but if you look at leading roles there’s still progress to be made, so it’s great to challenge that with DI Ray.

What makes Parminder so perfect to play Rachita?

She was absolutely top of our list, so we were thrilled when Parminder said yes. We’re huge fans of her work and she has so many layers that she brings to the performance, she’s warm and likeable, but also highly intelligent with huge emotional intelligence, which means Rachita’s identity crisis comes over very vividly.

How does Rachita’s home life play into the story?

Exploring her relationship felt like a good way of digging into Rachita’s identity issues and her choice of partner was a way of exploring that further, looking at other relationships outside of work. I felt like that it was also really important to represent the character in a rounded way and present the lived experience of the character that Maya wanted to write about.

We have high expectations of any thriller you’re involved with – will there be the usual twists and cliffhangers?

We talked a lot about how to make the police investigation twisty and turny, and how we could make sure that complemented the character story, we were always looking for the balance. We didn’t want to veer off into a much bigger high-octane thriller, but there’s lots of jeopardy and times when we really fear for Rachita’s safety. But there’s also a really important mystery to be solved. It was very important to everyone involved that we felt we were delivering on genre expectations for the audience.

We talked about how we could make sure the stakes felt very high, so there’s a really important case to be solved, while the drama also deals with the themes of the series. Looking at some of the exploitation that’s related to the themes of the show helped us to build the right crime story to explore.

Do you think the series is richer for being shot in Birmingham?

Yes, Maya was very keen to set it in Birmingham because that’s her home city and I think it’s great when a drama has a sense of place, it enhances the realism and authenticity of the series. Birmingham is the second city, it’s got lots of great locations and it’s also got all the credible demographic features of a multiracial, multicultural city which was very important for this drama. I lived in Birmingham for ten years – I went to university there and also did my first jobs there.

London’s doing a good job of making it hard to film there, it’s very competitive and much more expensive than other parts of the UK, so productions are looking at all the advantages of shooting in other locations. We shot Line of Duty in Birmingham initially and had a great experience, and then Belfast has been great too. You can also tap into all the local talent and you get to develop the local industries and local economies. There are huge creative advantages to filming outside of London.

How hands-on are you when it comes to filming?

It’s great to be involved in shows as an executive producer and it’s great not to have to write the script – other people do that! The writers I work with bring the kind of lived experience to dramas that I couldn’t, and I’m just part of the team. It’s great to be on set and to hang out with the team. Sometimes they ask me questions and I have things to contribute, but other times I’m just watching and enjoying other people’s work. Even as a showrunner on a show like Line of Duty I still work as part of a team. I know I get a lot of credit for what I do, and I’m in a very fortunate, privileged position but actually most of my job is about collaboration.

When HTM Television started it was it was just me and Jimmy Mulville, but now we’ve got a much bigger team including executives who take a really hands-on approach. So with DI Ray, Madonna Baptiste was an executive producer and she took on a lot of the day to day responsibility. And of course because Maya is an actor, she knows how sets work and she was invaluable, she was on set much more than writers normally would be. That was really important to the show and to us as a production company, because we want to empower writers to realise their visions. The last thing we want is for Maya to write a really great, personal script that isn’t realised properly.

Could DI Ray return for a second series?

Yes, definitely, this character could definitely come back for further investigations. We all really loved working together, and we’ve got incredible support from ITV for the ambition of the series. We’d all be thrilled if we got the opportunity to do more.

Do you ever fancy taking on a completely different project, like a comedy?

I really enjoy writing thrillers! I’m a fan of them, so it does feel like I’m probably going to stay in that genre. I mean there are obviously sub-genres for thrillers and I’m not entirely sure what kinds of thrillers I’m going to be writing over the next few years. I did a comedy early in my career when I was trying to find my place in the industry and I loved it, but I can’t see myself going back to it, unless I was producing rather than writing. I’d love to exec produce a comedy.