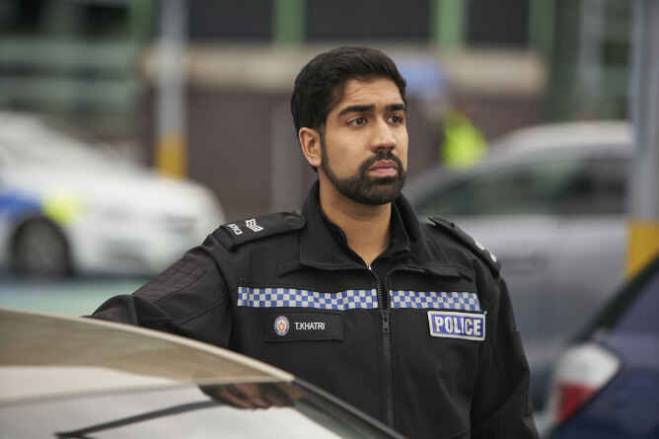 How did you get involved with the show?

They sent me the first episode and I noticed that Maya’s name was on the script, and obviously I knew her from Line of Duty, having played her cousin. I didn’t know she was writing a series, so I texted her saying how much I loved it. After the first audition I met the director, producer and Maya over Zoom, which was great. And Maya said she’d had me in mind for this project in some way for a while, so that was really nice.

Was it strange that your former co-star became your boss?

Yeah, it was a bit weird! But Maya is obviously such a legend that she never feels like the boss. I think she probably lets Jed do all that and then she can just be everyone’s friend! One time, her mum came to set and brought in loads of samosas for everyone that she’d made at home, it was incredible.

It was really great to get to work with Jed again too, and there are definitely some Jed trademarks in this show. It’s a thriller first and foremost, and some of the twists are pretty intense, they’re round every corner. I was genuinely gasping when I read the script, I had no idea what was going to happen next. Some of the twists are tremendously dark in an exciting way, and some of them heart-breaking.

How would you describe Tony?

Tony is a family liaison officer, so he works on his instinct. He’s led by his emotions and he’s a really nice antithesis to Rachita. He knows himself, he’s very confident in who he is and he sees through the tough exterior that Rachita puts up. He’s up for a laugh – he does the job properly, but it’s not his whole life and he doesn’t take much of it home with him, until it gets much more serious later in the story. He enjoys meeting people and chatting – he’s the life and soul of the party, if he ever goes to one!

Rachita is quite spiky with him at first, what does he make of her?

A lot of people are quite intimidated by Rachita, because she’s very professional with a spiky exterior, and when she first meets Tony she’s so hostile with him. But actually, that just endears her to him, I think he likes her and he becomes interested in breaking that down and seeing if they can work together, or even become friends. I think ultimately Rachita finds his persistence endearing as well.

It’s really nice the way that Maya has written their relationship, because I think Tony is very comfortable in his skin, and in his South Asian heritage. He’s at peace with it more than Rachita is. He wears a Kara on his wrist and he’s quite proud of his identity, whereas Rachita is still coming to terms with it and I think that’s a nice contrast to play. Ultimately Tony is able to show Rachita that it’s actually OK to be comfortable, and you can be all things, you don’t have to choose between one or the other.

Do we discover much about Tony’s home life?

I like to create a back story for all the characters I play because it always helps if you’ve got a really in-depth background, but Maya’s very good at writing three-dimensional characters anyway. So we know that Tony has a son and an ex-wife, and that’s explored a little bit in the show. There’s a really nice scene where he speaks Punjabi on the phone to his family, and he’s very open about it. Rachita is a bit more divided about personal and professional life, she doesn’t talk about home stuff at work, but Tony’s son is everything to him and he’s not going to shy away from that at work.

Rachita is frustrated by tokenism and racism at work, does Tony experience that too?

He definitely sees it and has experienced it, but he thinks it’s just the way of the world. I don’t think the team particularly takes to Tony, but I don’t think that’s a racial thing, they’re just annoyed that he’s hanging around all the time like a bad smell! But of course, you can’t shy away from the fact that if you are from the minority and working in a certain environment you are probably going to experience these things. He copes with it differently to Rachita, in that he lets it bounce off him and that might not be healthy.

This racism can’t help but hurt him, but I think he’s come to terms with it. In some ways he learns from Rachita that you do have to stand up to it a bit more, and it’s not OK.

Do you think it’s important for a mainstream drama to explore every day racism?

Yes and it’s definitely one of the show’s strengths. It’s not a drama about racism, it’s a really exciting thriller, but what Maya does so well is to put in these moments that you can’t shy away from. They happen, and that’s a reality we should confront, but they also don’t define the characters’ lives – your whole day doesn’t become all about those micro-aggressions, even though they affect you. It’s quite subtle like that – dramas can tend to be very big in their dealings with racism, which is important, but I think it’s nice to see more everyday stuff to show what people go through and how they deal with it.

Do you enjoy playing police officers?

Well, I’ve ended up playing quite a few now, so there’s clearly something to it! I was playing a family liaison officer this time, so I didn’t have too much police jargon to learn, but there was one night shoot where I had loads of complicated lines to say in one scene. Jed happened to be on set that time and he’s such a stickler for detail, so at 2am he was giving me loads of notes and throwing brand new lines at me! Vicky (McClure) and Martin (Compston) always used to say on Line of Duty that you’ve just got to roll with it, you can’t let the language throw you. In preparation for this job, I interviewed a few police officers, because I wanted to make the performance as real as possible. They’re not intimidated by the language, it’s just in their bones, so you’ve really got to embody it.

I spoke to one FLO and other police officers on the beat, who were so generous with their time. It was important because you’ve got to get to the human beings behind these characters – I’m playing a police officer, but he’s also just a person. They also showed me technical things, like how they stand. You speak to police officers and they watch all of these procedural TV series and they’ve always got problems with something, so I wanted to get it right!

I also had some police chase scenes to do, involving some running. I felt quite cool doing it at the time, but its never as cool watching it back! You watch it and think what was I doing?!

Did you enjoy shooting in Birmingham?

I loved it! I’m from the Midlands so it was just amazing. Birmingham has a fantastic vibe, everyone’s so friendly and there’s something about going home that makes you feel so at ease. I stayed with my dad a couple of times when I had a day off – it’s just a 20-minute train ride to where he lives, and I loved going back and getting those home comforts.

Lots of us were local – they hired local crew and a lot of the cast were from the area because Maya felt that was important, Parminder is from Leicester. It just felt really welcoming as a place, and some of the cityscapes and shots of Birmingham look amazing, I haven’t seen that on screen before. I think it’s a really great thing for Birmingham and I think more shows will film there. I hope the viewers respond to seeing something very different on telly, just by virtue of the fact it’s set in Birmingham but this is modern Birmingham.

It was a full-on schedule, so filming was very intense, especially for Parminder. But the more serious it gets, the more laughs there are on set, that’s what keeps you sane. We really got on as a cast, everyone was really fun, especially when we were doing weeks of night shoots – you have to be up for a joke on a night shoot otherwise it’s going to get pretty dark! So we were all laughing lots, it was such a joyous set.

Had you worked with Parminder before?

I hadn’t ever met her, but I obviously knew of her and have seen her work. I have nothing but great things to say about Parminder. Most of my scenes are just me and her, so we became really tight, we went out for dinner a lot and chatted through scenes together. I admire her from her work back in the day, especially as a South Asian actor, because she’s a trailblazer. But also she’s a good person, and that’s what makes her so great to work with, I learned so much from her about being positive even when you have so much work to do! She was always up for a laugh.

What do you hope viewers will enjoy most about the show?

Primarily I hope they think it’s really exciting, I don’t want them to know what’s going to happen next from episode to episode. I hope they fall in love with these characters, and connect to them, and ultimately care about the issues we are dealing with.

Live At The Moth Club | Interview with Ellie White (Cress)

Tell Me Everything | Interview with Tessa Lucille (Regan)