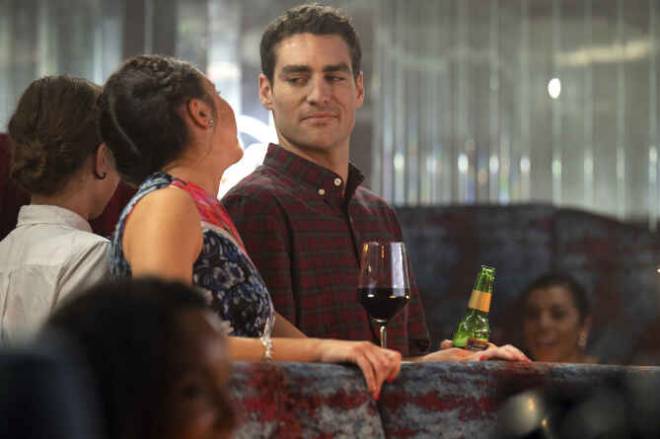 Tell us about your story with the project?

I was sent a script by my agent and I didn’t know the book, but I loved it. I met with the team including Simon Maloney, the producer, who I’d already worked with on a previous job. I really connected with and loved the script and my take completely aligned with their ambitions for the show. I read the book in a weekend and then we started casting which was a long process, as we had a big ensemble cast as well as the girls. The common thing was that the whole cast and heads of department all just really loved the material. They just fell in love with the characters and were really passionate about it.

Tell us about the process of casting the boys?

We saw tons of Nathans, both Australian and not Australian. Ryan Bown is actually Australian and he was by far the most brilliant who came into the room. He got the role and found humour in it. Dolly writes with affection, even if she’s taking the mickey and he really got that. Jordan Peters was so funny and it was quite hard as we saw so many funny actors for that role. We spent our time trying to make him look less cool but he’s hilarious, brilliant and such a detailed actor. Then with Street, I think we saw every young man in London. When Connor Finch came in, he was one of the final people to be cast. It was like a first date that goes brilliantly.

Tell us about the first time you met Dolly?

When I first met Dolly, she seemed very familiar. We had similar backgrounds; she grew up in Stanmore, I grew up in North London. We both had best friends, she had a Farley and I had a Sara in my life. We met aged six and she’s very like Birdy. Dolly and I really connected. Her taste is very similar to mine musically and culturally. We really gelled with all her ambitions for the show and it was a great symbiotic kind of first meeting, it felt very easy.

What did you first think when you read the book?

I found it profoundly moving and very funny. I had never read anything that I felt was so truthful about the messiness of your 20s. Dolly has a very individual tone and I felt she really spoke to me and I think that’s why she speaks to women of all generations. I’m a generation older than Dolly and my agent is a generation older than me and she loved the book!

What’s the difference between this and your previous work?

I’ve previously done quite a lot of genre, lots of thrillers and dark drama, both period and contemporary, but never something like this with a grounded comedic tone. Dolly has an incredible instinct for comedy.

How was the shoot process?

The shoot process was really challenging, but it was the most fun I’ve ever had on a shoot, it was full of laughter. We had an amazing crew but it was challenging as we were shooting in Covid, so those protocols, which meant all the bar and club scenes where you would have a lot of crowd, meant we had to be minimal – and that dictates shooting in a more focused way.

What kind of research did you do?

I constructed a big mood book with photographic and film references that I shared with the cast so everyone could springboard from that. It’s really helpful to have lots of reference. Ten years ago doesn’t feel that long but when you look at what people were wearing, it does date.

Tell us about the heads of department.

Simon Maloney and I had worked together on a previous job and we really enjoyed assembling heads of department on this show that were very passionate and connected to the material. Matthew Price, our costume designer, had lived in Camden in 2012 and his pitch photos were of his mates when he first came to see us. We worked through the process of what was around at the time, such as Topshop and American Apparel, so we could get the period details right. Janet Horsfield, our hair and make-up designer, was very passionate about telling stories with hair and looks that were big at the time. Charlotte Pearson is an incredible production designer, she got the story and we had similar references and we’d match them to what we found in Manchester.

What was it like working with the cast and the girls?

I loved casting this show and I adore every actor that came on board. We’re so lucky to have this cast. It was a joy from the rehearsal with the four girls. They bought so much energy to the show. I’ve worked with Emma before and I’d been a fan of Bel’s since Diary Of A Teenage Girl.

What makes this project so special?

It’s a really truthful, nuanced portrayal of female friendship and not a glamourised portrayal of life in your 20s. There are radiators with underwear on in every room of the girls’ house. That’s not slick, it’s not cool. It’s just how it is.