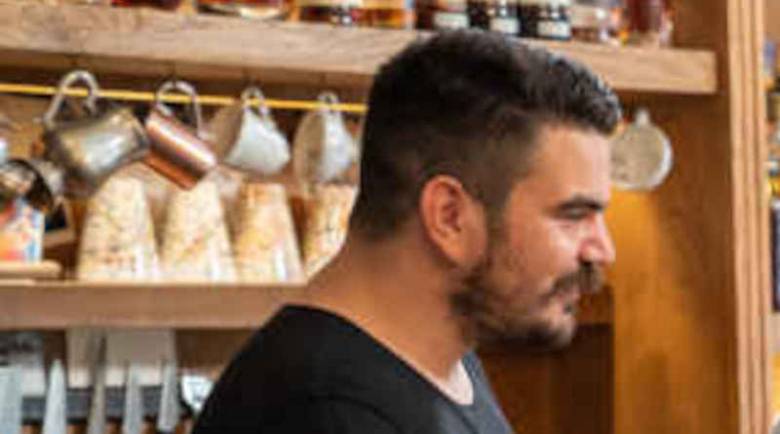 How did you feel about getting back on the road (and water!) together again?

It was fantastic, it really was. It was just so nice to be out again with Gordon and Gino, back on the road together, especially after the unprecedented times and the pandemic. I’ve been to Greece a couple of times before with friends and family, but the things I do with Gordon and Gino – I cannot do with anybody else I know! The last adventure we had in America was just something else. I cried so much when it was over. And so to go back, and to beautiful Greece – we went in May, the sun was shining, the water was warm. Yes, there were restrictions and we had to be careful, but it was such a privilege to go, when so many people couldn’t. And not just to go, but to do it in style!

What appealed to you about exploring Greece and did it live up to expectations?

Fruitcake (my partner) has always wanted to go to Santorini, so I will need to go back again and take her. But this trip, due to the pandemic – Santorini was completely empty, I kid you not, nobody there. It was just Gordon, Gino and I walking in the street. And as much as that was sad, it was incredible, because I will never experience Santorini like that again in my life. The beauty as well, was meeting all these amazing Greek people and sharing moments with them, because that’s what life is about. It filled my head with joy.

Any personal highlight from the trip?

When we were on the catamaran in the middle of the beautiful blue sea – that was just amazing. That was bliss. Diving into that water. And the other highlight for me was Athens, seeing the sights, because I just love history so much. When you think about all the Greek history – 2500BC – they were starting what we know society to be now. I tried to speak to Gordon and Gino about it but they were just not interested. Also, when we were in the Olympic stadium, that was very emotional for me because of my daughter. And then I beat Gordon in a race! I was always going to. But he wants to win, so he’s full of mind games. He put on a brave face. But I beat him at swimming in France and now I’ve beaten him at running in Greece! Hah. What can I do?

What was the best thing you ate or drank?

The lobster was sweet, tasty, so moist with the sauce that Gordon made, it was very, very good. Also the moussaka we had was delicious. And the wine we had in Santorini was incredible – well made, very well balanced, lots of flavour and depth, a bit of oak, you could taste the sun!

Who was the best captain?

Gino was good actually, but he’s just a nutcase. Gordon doesn’t like having someone else take control so he just complains, but Gino has his license, he is the captain and has more experience driving boats than Gordon! It upstaged Gordon but it made him laugh too.

Your daughter has just competed in the diving at the Olympics and you did some impressive diving for the lobster in Greece – does it run in the family?!

I am not a good diver. We had to dive 5m underwater for the lobster and it was very difficult. As for diving from aboard, I have tried it, I went for five days this year and took lessons. My heart was beating so fast stood on the board. I jumped from 10m but only feet first. The best I could do was headfirst from 5m. After five days I was covered in really heavy bruising. I will never do it again unless people pay me a lot of money! So I know only too well how difficult it is and what an achievement it is to just throw yourself off that board. My daughter is an athlete and she trains every single day. She was a British champion aged 15. She really wanted to go to the Olympics and she trained so hard. But she had to go by herself. I was so worried but on the day it actually started my nerves went. I knew she was going to go to the final, I knew it in my heart.

How would you describe your companions on this trip?

Gordon is like a big baby, he gets upset, he likes to throw his toys out of the pram. He’s always right, even more so when he is wrong. And he just wants to talk about how good he is. He can’t help it. As for Gino, he just wants to do what he wants to do, when he wants to do it and he doesn’t care about anything. Except mozzarella. He only wants to talk about mozzarella. In saying that, I love them just like they are. It’s live and let live. As much as they drive me mad they are also incredibly inspiring. They have achieved incredible things in their lives and I learn a lot from them. I like to be around people who motivate me. They inspire me and bottom line is they make me laugh. I cannot tell you how much the adventures are unpredictable. Nothing else I do in my life is as unpredictable as this. On and off camera. What you see on camera is exactly the same. Well, actually it’s a slightly tamed version of what is happening off camera! But our motto is ‘the party will never end’ and I just never know what is going to happen next.