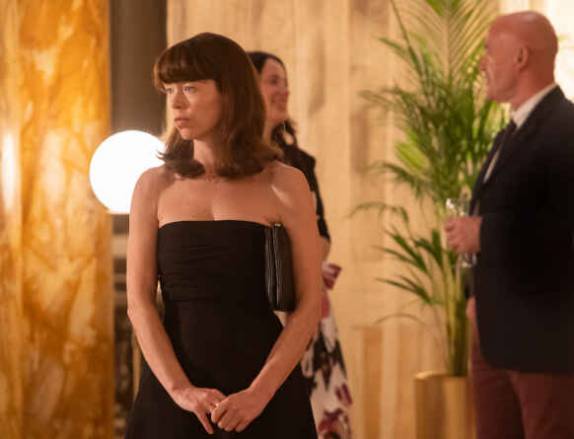 How did you get involved with Hollington Drive?

I wanted to be part of the project before I had even read the scripts, because I knew of (writer) Sophie Petzal and her work. I watched a series she wrote called Blood, which I thought was absolutely brilliant. I hadn’t really seen anything like it on TV before. It was really odd, the characters were quite heightened, but it was just exceptional. So, I got in touch with Sophie and her producer, Jonathan Fisher, and asked to work with them. Luckily, they said yes!

Then I read Hollington Drive and it was great. I was really gripped, I raced through the scripts. Sophie’s really good at not sitting on her laurels, she keeps the narrative going all the time, which is what I really liked about it. She keeps the momentum up, it’s great storytelling. I love thrillers, I hope the audience has a nice night in on the sofa watching it.

How would you describe Theresa?

She’s a bit of an anti-hero really. She’s often not very likeable and often not a very good parent, she makes lots of terrible decisions. She’s slightly unhinged and I really liked that, because she’s not a cookie cutter mother making the right decisions, doing the right thing. She’s very flawed.

She doesn’t handle Alex’s disappearance well at all, but she’s not a happy go lucky person before that, she’s dysfunctional and it becomes clear that she’s suffering with trauma.

From the outside, it looks like Theresa and Helen are living the perfect middle-class life, doesn’t it?

It’s very much a Stepford Wives idyll at the beginning, this very clean perfection, which of course is not real, it’s a veneer for lots of other things going on with these people.

There’s more to this story than meets the eye, isn’t there?

Yes, it’s so well done. Something I really want to stress is that on paper this looks like another drama about a kiddie going missing, but it’s not that. This series is really not about the missing child – that’s just a catalyst to make people turn in on themselves.

The real centrifugal force of the drama is this hideously co-dependent relationship between Theresa and Helen. It’s very complex and you just can’t really work out what’s going on between them. Hollington Drive is about a lot of things, but that relationship between Theresa and Helen is the main driver of it, and it’s exposed and ripped open by the child’s disappearance.

There are some dark moments in this drama – what was the atmosphere like on set?

I always find filming dramas much funnier than doing comedies. There are some funny characters and some little jokes in Hollington Drive, it’s not all misery – I wouldn’t want to be part of a misery show.

Were you excited to be working with a strong female team behind the camera?

The industry has embraced the equality and diversity that we desperately needed, and it is far too late coming, and we still have a long way to go. But our director, Carolina and producer, Catrin were just the best people for the job, which is really important. The industry has had a shake-up and what we’re all striving towards is a much more level playing field, where more people are given opportunities to shine, so that you really see who can shine. It’s such a positive thing – our team were the best for the job and so talented.

How did you adapt to the challenges of working through a pandemic?

I went back to work really early on in the pandemic, to do Code 404, and then we did Motherland and Line of Duty at the same time, so it’s par for the course for me now! It’s much harder for the crew than the actors, we get the easy end of it as we can take our masks off when we’re acting.