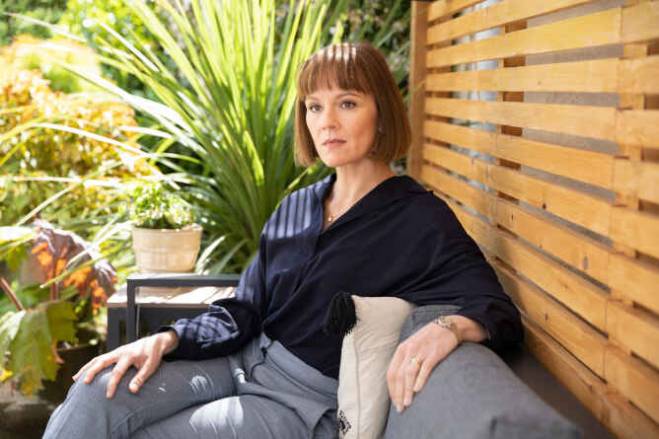 How would you describe Helen?

Helen is now a primary school headteacher and a pillar of the community. She has an assumed authority about her – I know those people so well, the type that when they walk into a room you just do what they tell you to do, just because of their tone of voice, it’s that simple. She’s just very high status and you’d look to her during any sort of crisis.

How would you describe her relationship with husband David?

She’s in a fairly unhappy marriage with a very depressed man. That’s why she also relies on Theresa, to give her life outside of her rather trapped status quo at home with her husband, who has given up work and is at home a lot. The life has gone out of him somewhat. On the outside everything is great for Helen and she’s in charge, but on the inside she’s got her own demons and her depressed husband to deal with, which is never easy for him or her.

How does Helen react to Alex’s disappearance?

She gets practical again, so she gets in the car and drives around the town to try to find him. She seems never to have a moment of uncertainty. She just knows what to do and assumes responsibility in such a way that she shepherds the community along with her. She’s very forthright – I think when everybody is panicking if there is one loud voice telling people what to do, that’s the one you end up hearing. She’s very practical and confident in her choices. People flock to her for advice and the first thing Alex’s parents do is to go to her, because she is that figure in the community that everyone relies on.

What appealed to you about starring in Hollington Drive?

It was presented to me as a package, with our director Carolina at the helm and Anna attached too. Obviously, Anna and I have worked together before on The Bletchley Circle. But what I really loved about the script was the chance to play out this fascinating relationship between co-dependent sisters. Apart from in long-running soaps we just don’t really see sisters on telly or really examine their relationships. I’ve never had a sister so I’m fascinated in that dynamic.

Theresa isn’t entirely confident in her own skin, and very much depends upon Helen, who is very organised and controlled. Theresa looks up to her, and then this appalling thing happens, a child goes missing and Theresa is absolutely convinced that her son has something to do with it. The show is about these two sisters coming together to protect their children, and in the end it’s about the fact that there’s no length to which a mother won’t go to defend her child. It’s interesting because both sisters have only got one child, so they have a very intense relationship with each other but also intense relationships with their children. It’s an interesting family portrait.

Did you enjoy working with Anna again?

Yes, Anna and I know each other well. In an age when there’s not often time for lots of rehearsals I looked at this very intense relationship and knew we could evoke it believably on screen, just by virtue of the fact we know each other so well. There’s a shorthand so the whole thing becomes more enjoyable.

The show goes to some dark places, were there tough moments to film?

Yes, some of it was very challenging and tough. When you’re filming those scenes, it’s not all entirely fake, you do have to visit some of those real emotions. After a project like that I always need to head towards a comedy, because it’s a very intense story to tell. You want it to be a really satisfying experience for the audience, so we’ve got to keep it tight and believable, and play the darkness.

In the end it meant we needed more levity between takes because we were all like coiled springs, especially having been in lockdown isolation. There was a certain level of hysteria on set after – and sometimes during – these incredibly difficult scenes because it all comes from the same place, deep grief and absolute hysteria are two sides of the same coin.

To what extent does this drama explore the class differences on Hollington Drive?

Visually, you’re always aware that those in the nicer houses on Hollington Drive are able to look after their children in a slightly superior way by virtue of the cash that they’ve got, and they take all of that for granted. They have no real experience or understanding of what life is like on the other end of the drive. Theresa runs a deli and it’s a very middle-class life experience that both the sisters have had.

The haves and the have-nots are living side by side here, and the have-nots are always getting their noses rubbed in it. Then they go through everyone’s worst nightmare of a child disappearing and the endless unanswered questions. The story is about community and how they all co-exist during this period of abject misery.

Was it strange filming the drama during a pandemic?

It was very odd but I felt so lucky to be there, to be working and to be among actors. The COVID protocols were totally unknown to start with, but now it’s just part of the process to get a temperature check and fill out a form on your way in. It’s much easier for the actors than the crew because we get to take our masks off to perform.

I think we’re just adaptable and I’m so proud that our industry went back as quickly as it did. People need new telly and it must be made, so where there’s a will there’s a way. Everyone’s a bit more concentrated now and there’s less faffing on set – we don’t all break for tea and pass around sandwiches anymore, but I quite enjoy getting on with it.

Hollington Drive has two female leads, a female director and a female writer – was it inspiring to be part of this female team?

Oh yes, the women are up front and centre and this was a joyous project to work on, it’s the magnet of the whole thing. I’d never met our director, Carolina before but what a fabulous woman she is, a truly brilliant leader, who never needed to raise her voice unlike billions of the men I’ve worked with. She was very relaxed but eagle eyed. Our writer, Sophie is unassuming, interested and generous, and our producer Catrin (Lewis Defis) is so experienced and glorious. To be in a team of women was just such a joy and pleasure, and that’s my idea of a happy working environment, bring it on. I’d like more productions to be like that. It’s definitely happening more and it was such a good experience.

What do you hope will bring viewers to this show?

It’s properly satisfying, twisty-turny telly, exactly the kind of TV I like watching. You don’t see any of the twists coming. Our writer, Sophie is so clever about taking the simplest bones of an idea and populating it with these great characters. She’s great at observing humanity, so she draws all these people so believably, like Agatha Christie would, because she has such an amazing knowledge of psychology.

The story grabs you from the very beginning. Our director, Carolina has shot it in a very filmic way, so it’s incredibly beautiful to look at, but you only get a few minutes of gentle lulling into Hollington Drive before it grabs you by the neck and takes you on this ride with so much suspense. Dare you examine how far you would go to protect your child if you thought they had committed a crime? It’s a helter skelter speed thriller ride from the off.