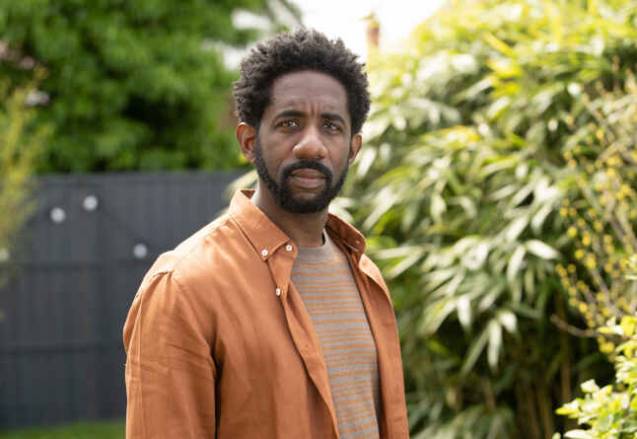 What appealed to you about Hollington Drive?

When I got the scripts, I chomped through the first two episodes and I knew it was definitely the right job to do. It’s such a great potboiler, a proper thriller with a great conclusion. I think the biggest appeal was definitely the characters though, because at first glance the story is about a couple of families who seem very nice, but a local boy goes missing and they gradually unravel.

It’s a great character study of how families operate in times of crisis, particularly sisters, and you don’t really see many siblings on TV at the moment. It also looks at what a family is. Theresa and Fraser have a blended family – they aren’t married and they are both parents to someone else’s child. I love where television is going, because obviously we do still see the classic four-person family on TV, but it’s great to see a blended family in a show about a completely different subject, it makes it more relatable.

There is an element of whodunit in the show, but it’s as if these two families have been put in a Petri dish, and we’re looking at them under a microscope, seeing how they operate. And of course, it’s not just the contemporary story we’re following, there is Theresa’s back story too, which has led her to the present day. The two stories collide in quite a dramatic way.

How would you describe Fraser?

Fraser seems like a very stable, loving man who is very good with the kids. He’s well-intentioned, but as with many ostensibly nice people, his niceness is hiding something else in him that he’s less comfortable with. He does have a difficult relationship with his partner Theresa – he genuinely loves her but they struggle to communicate and they’re often treading on eggshells with each other.

He feels a lot of guilt for letting the kids go to the park on the day of Alex’s disappearance. Theresa carries a lot of anxiety, she’s highly strung and constantly worrying. So in order to facilitate a really nice family barbecue he tries to get her to relax and let the kids go out. But because it ends in such a bad place, it’s fuel for Theresa to say “I told you something might happen”, it’s proof to her that she was right to fear all the bad things in the world.

Fraser is quite defensive of his brother, Eddie, isn’t he?

Yes, Fraser loves his brother, but I’m not quite sure that everybody else feels the same way! The two sisters are very close, they live literally side by side and they’re together all the time, so Fraser thinks it’s wholly unfair that everybody turns their nose up at his brother, Eddie. He’s a little bit louder and more confrontational than Theresa’s family so Fraser spends a lot of time excusing his behaviour, but Eddie’s had a recent break up and Fraser wants to be there for him.

Did you enjoy acting opposite Anna Maxwell Martin?

‘ve never worked with Anna before and honestly that was a big draw when it came to taking the job, because I’ve always wanted to work with her. This was the chance to play a couple, so I knew we’d be working together incredibly closely for weeks. Both Anna and Rachael are on fire at the moment, their acting is exquisite in this show.

Anna always looks for the comedy in scenes and in some ways that’s what’s good about the show – there are many times when you are faced with despair and you end up laughing, that’s very human. Sometimes in television we iron all those things out and just present one side of the story. I think it’s quite recognisable, the way that we shift through tragedy. One minute we can be in tears with our head in our hands and the next minute you’re getting on with normal things, picking the kids up from school and doing the things we have to do.

To what extent does this series play with our idea of the perfect middle-class life?

Hollington Drive is a place for people to relax into the comfort of their lives. All the forecourts are very clean with a little white Range Rover in front of each house and a lovely garden and conservatory at the back. You’re in your safe castle that you’ve built for yourself and you don’t for a second imagine that something’s going to puncture that, everyone’s quite happy enjoying what they worked hard for. Then there’s a ding dong on the doorbell, a boy is missing and nothing can ever be the same again. It’s such a great start to the series and it shows the fragility of our lives.

It also shows that everybody has their struggles behind closed doors. Marriages and relationships are difficult and you have to work very hard at them. So when you see people for whom it looks effortless, the truth is they’re working as hard as you are.

We tried to open the series on an idyllic, perfect barbecue but the weather was terrible, it was difficult finding any sunshine! We spent two days waiting for the cloud to clear and as soon as the sun came out there was a frantic panic. Plus, the actual barbecue itself looks amazing on television, but it’s completely impractical for cooking sausages!

How do you think viewers will feel about the way the story unfolds?

Hollington Drive is such a relatable, well-paced, gripping story and it draws you in within the first ten minutes. When I auditioned for the show, they kept the final episode a secret, and by the end of episode three I was absolutely desperate to know what happened, it was killing me! So when I got the job I just devoured the last episode and it’s a such a satisfying ending. When you invest in a thriller it’s so important for people to come away thinking it was a great ending!

I think the show is quite original in that usually in a story like this you follow the parents of the missing child, and of course you are steeped in that tragedy. But what’s clever about this series is that it’s about the families observing from a distance. They start by thinking “Thank God that’s not us”, but then gradually the child’s disappearance encroaches on their lives. They find themselves in a story that they didn’t think they were part of. It allows you to step back from some of the high emotion and really dark places that the story might have gone to, and offers a different perspective.