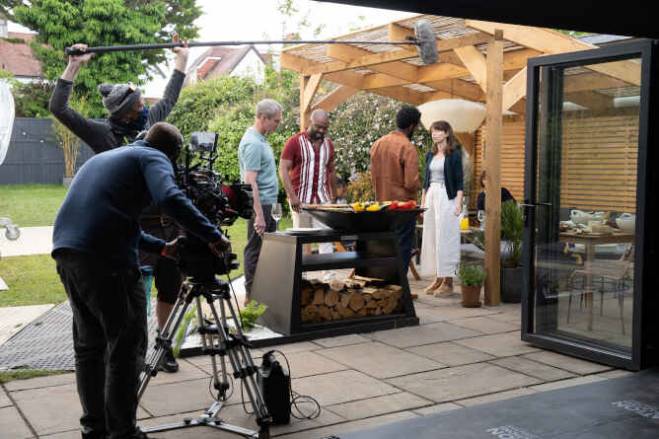 What inspired you to write Hollington Drive?

I had just finished two series of Blood, and was wondering what to write next. I wanted to make a show that wasn’t a world away from Blood, but felt bigger and more ambitious tonally. Also, I had always wanted to write about sisters – I have a sister and that relationship is probably one of the most important in my life.

So I started thinking about the idea of a secret kept between sisters who live very close to each other, and then they suspect their children might have been responsible for another child’s death. Then they make decisions that have unfolding consequences and nothing is quite as it seems. I started developing that story with my producer, Jonathan Fisher and we would go on endless walks coming up with ideas for how the show could twist and turn. We both had a good instinct about it.

I should say that me and my sister have a very different relationship to Helen and Theresa! But, of course, you take things from your own experiences all the time, things like childhood dynamics that live on into adulthood. I’m obsessed with family dynamics.

Did you write Helen and Theresa with any particular actors in mind?

I didn’t, but I’m so delighted with the cast, it’s absolutely incredible. As soon as Anna Maxwell Martin and Rachael Stirling came up it sounded like the most exciting dream team.

Anna is somebody who elevates everything she does. Rachael is extraordinary too, I’ve always been such a fan of hers and what’s amazing is the chemistry between her and Anna. I don’t think either of them has ever delivered a bad performance in their whole career. It was a privilege to watch actors of this calibre!

What can you tell us about Helen and Theresa’s family lives?

I really liked this idea of two families who are a bit too close for comfort. The sisters are all each other has in terms of blood relatives, and Theresa has had problems in her past, so Helen feels she has to take care of her. It felt like that would have a real impact on their own families, and when you have two people living right next to each other, you want to see the juxtaposition between how they present their lives and how they unfold behind closed doors.

I wanted to explore different relationships. There are complexities and difficulties for Helen and David’s relationship. With Theresa’s partner, Fraser, I wanted someone who is a really good guy – a good father and a good person, who contributes. You will see how these two relationships juxtapose with each other and enhance the drama.

Also, because we were painting this picture of middle-class England, I was really keen that this should not for a second be an all-white world. In every facet of the show I wanted to cast broadly and we decided early on that Theresa’s family would be a mixed family.

How did you want this show, and Hollington Drive itself, to look on screen?

I always had a very clear picture in my head of what this street would look like. I wanted something that felt bright, without being too cartoony or silly. I wanted it to juxtapose with the dark underbelly of the story, with detached houses that looked really nice and idyllic but not recognisably from a specific part of Britain like Manchester or Bristol. I was looking for homes with their own unique character, that didn’t belong to a particular period or region.

It was quite difficult to find that in Britain, but I got to be part of the conversation the whole way through, and I was so lucky the locations manager found a street that was exactly what I had imagined. It has white houses that look comfortable and aspirational. Overall, it feels compelling and inviting, even though the subject matter is dark and kind of twisted.

How much is this a drama about class and shattering the illusion of the ‘perfect’ middle class life?

We wanted to set this drama in a world that felt very lovely, with people who live these perfect little lives, having the kinds of discussions that you find yourself rolling your eyes at when you go to friends’ barbecues. Then that world is suddenly disrupted by this incredibly terrible thing, but these are the kind of people who think ‘people like us’ don’t do terrible things.

We wanted to expose and explore that. We don’t go into detail about where Hollington Drive is, or how much money anybody makes, but you just know the characters whose son has been killed don’t live in a lovely big house, they are in the slightly more rundown part of the street. So when the child goes missing there are all these judgments about the parents, but when it comes back to you and yours, all that moral superiority disappears.

I wanted to focus on that, but I still have great empathy for my central characters. These are people who have complex emotional lives, but their carelessness impacts on those who aren’t as privileged as them, and their decisions to try to protect themselves have terrible consequences, which for me is emblematic of reality.

To what extent are you inviting the audience to ask themselves how far they would go to protect their children?

It’s a very sensitive topic and people will question whether the series is about what we would do for our family, but I wanted to be quite careful – I didn’t want to approach this story saying to the audience, “You would do this, wouldn’t you?” That isn’t my opinion and it’s not the takeaway from the show. I wanted to paint a picture of two very specific characters, whose choice of actions is influenced entirely by where they’ve come from and their own fears. What happens is not something I would expect people to automatically sympathise with, but hopefully you can sort of understand how these characters have come to these decisions and find that compelling, if not entirely sympathetic.

This is a story driven by two complex female characters that is written, produced and directed by women – was that a conscious decision?

Part of it was just my desire to write about a sister relationship and adult sibling interactions, but of course that means the opportunity to write a double female lead drama and that does feel exciting and interesting. We absolutely wanted a female director for this drama, that was a big priority. With two female actors leading the show and a female writer, I wanted someone who could really relate to these characters, and Carolina Giammetta was an obvious choice, her star is on the ascendancy.

How challenging was it to set up the suspense and thriller elements of this drama?

The challenge with mystery is always what to reveal and when to play your hand. This story came fairly organically, but I wanted to make sure this drama wasn’t all about getting to the answer, at the expense of developing the characters and unfolding things slowly. Even if you’ve guessed the reveal by the end of the show it shouldn’t matter, because the resolution should still feel compelling, rich and emotional, rather than just a solution. The other challenge in this show is that there’s no central character actively investigating the case. There is a cop character, but we’re not watching through their perspective as they try to solve the murder. The death is at the heart of this, but we’re not following an investigation, so that mystery has to unfold and keep building without the benefits of a character driving that. It’s a bit more like a community drama in that way. I think that was the challenge but also the virtue of this project, so I was effectively writing a murder mystery, but without the bells and whistles you’d normally associate with those shows. That made Hollington Drive unique and different to write, but I think more enjoyable as well.

What would you like the audience to take away from the show?

Hopefully this is a drama that’s neither bleak nor straightforward. There are twists and turns and it goes off in a direction you don’t expect. It’s quite quirky and it has an incredible cast giving nuanced performances. I love writing dilemmas, and if you’re compelled by watching people making impossible choices, then hopefully this is something you’ll want to watch. There’s a big decision early on that impacts on everybody, and on the characters’ relationships as we watch it unfold…