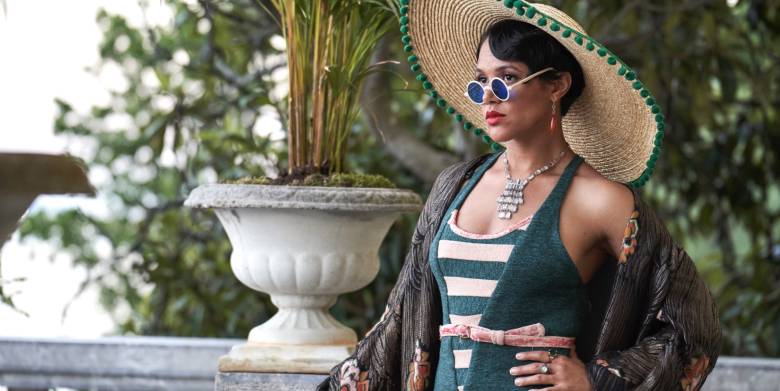 Hotel Portofino, ITV1’s 1920’s set costume drama begins this February. Lily Frazer play Claudine Pascal and here she talks about getting to perform a song and dance number and getting time to explore the amazing locations.

What appealed about Hotel Portofino?
The scripts were fantastic – you think you know the characters and where the story is going, but everyone has a secret and a vulnerability, there’s politics, scandal, a whodunit element… And it feels like an ensemble piece, so you instantly fall in love with these characters.

The location can’t have hurt…
It was a dream. I had to pinch myself quite a few times. So many moments where you watch and go: wow, is that real? And I had a really lovely schedule so I could get out and explore a bit with my family. Being by the sea was so healing, especially after lockdown.

Who is Claudine Pascal and what is she doing at Hotel Portofino?
Claudine is a singer and dancer in a Paris nightclub, who arrives with her lover, Jack Turner (Adam James) in this beautiful car, and gets out of it with this enormous cigarette holder that’s almost as big as her. She’s a force of nature. No one has ever seen anyone like her before. She is just fearless, says whatever she wants, wears whatever she likes…The other guests presume she’s Turner’s wife,but it’s a little more complicated than that. It’s liberating to play someone that sexy, when women at that time were one thing and she’s another although as the series goes on you start to see her vulnerabilities and more of her background. She rocks the boat a little bit, I’ll say that, but in the best way. I missed her when I came home, which sounds ridiculous, but she was such a wonderful character to play.

Is she aware of what an outsider she seems in 1920s Italy?
Definitely – it’s something she’s had to cope with her entire life. Her coping mechanism is exactly what it is for her on stage: the show must go on, so she puts on a smiling face and gives a little comment. Of course, it hurts her inside, but because of her ethnicity, growing up in America,she’s had to deal with way worse than a few people staring. She and Jack met when they were in Paris and had this freedom to just be whoever they want, but now they’re in this British hotel in Italy and he doesn’t
want to be seen out with her, so she gets quite lonely and seeks comfort with other people. She’s far too bold to let the pain show just yet, but it’s definitely there.

Is Claudine tuned into the political turmoil of the time?
I think she would be the person that would stand up for anyone that was in trouble, but she’s not going to get openly involved unless she sees something actively happening.

How much did you know about the era?
I studied it at school, although that was a while ago now. I really enjoyed researching the role and the era. I read a lot about Josephine Baker, who isn’t a direct comparison to the character, but she was inspirational and their journeys had definite similarities.

How much fun was it to perform a song-and-dance number?
It was so much fun. I did some musical theatre quite a few years ago, and the last show I did was Dreamgirls in the West End, but I haven’t had a chance to do it in a long while. I’d already told (director) Adam Wimpenny that I’d done a bit of singing and dancing, and on my second day of filming he mentioned that they were composing a song for Claudine. Cut to a few weeks later, and I was in a recording studio! It was really lovely to revisit that side of me.

Did Claudine’s American accent come easily to you?
I really enjoyed doing it – I did Dreamgirls, I played Nina in the original West End production of In the Heights, and I’ve always wanted to do it for screen. I’m from Warwickshire, but people who had only worked on the edit for the show didn’t know I wasn’t American, so I took that as a compliment!

Did you have a favourite costume?
The suit she arrives in is the most beautiful thing. I can only describe it as badass: so not of the time, such a head turner, an elegant but quite masculine suit, with glasses. I did a little squeal every time our costume designer brought in something new. Every single thing that Claudine wears is a wow. Even when she’swearing pyjamas,doing yoga on the beach,they’re the most beautiful fabrics.

How was Adam James to work with?
He was so funny. We had a driving scene where we had to laugh, and he was telling me all these funny stories so it was very easy! He was really supportive as well. Out characters are not supposed to get along, but between takes it was the complete opposite, he was such a good friend on the show. There are some really emotional moments and times when Jack’s quite physically violent, but Adam was always so courteous in those moments. We always ended up getting there emotionally, then in the next hour we’d be laughing about something.

What was the most challenging aspect of filming?
It was such a gift, but I can be quite shy and anxious and apologetic. I’m the person that,if someone bumps into me on the street, I’ll apologise to them. What was empowering but also scary, is that Claudine is nothing like that. She’s not wearing much in so many scenes, and sometimes Lily sometimes was going: gosh, that’s a bit risky. Having to just go: no, what would Claudine do? That was so freeing, because she would love the attention. So I worked on stopping that inner negativity from coming out. It’s my new catchphrase: Be More Claudine!