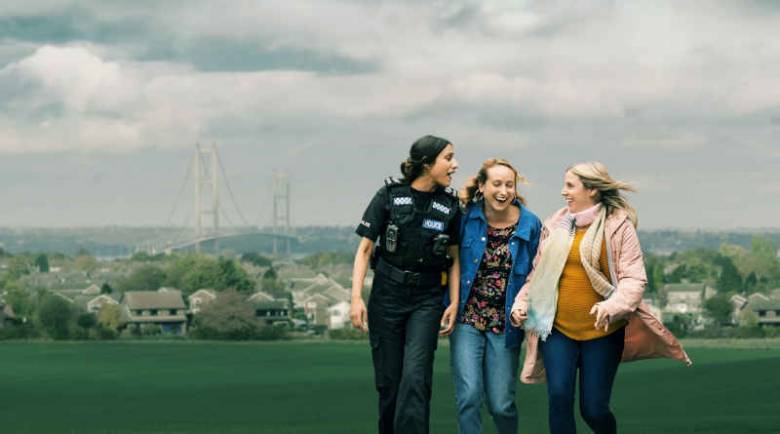 Where did the idea for Hullraisers begin?

Fable approached me to write a pilot based on an Israeli sitcom, Little Mom. Hullraisers and Little Mon both have a joyful, playful tone and you believe that these women really are friends.

Tell us a little about the process of adapting Little Mom.

When I first watched Little Mom, I was really struck by the universal things it said about motherhood. You could tell these were real stories that had happened to the writers. There was an authenticity. I watched it and thought, ‘How do I capture that?’ so I wrote about Hull and I based the three characters on five of my friends. Little Mom is so long-running and that’s what Fable want from this, something where it feels like family to an audience, in the same way that Sex and the City does, not that we’re anything like that but the idea of these characters who love each other.

Tell me a bit about your co-writers.

I wrote the pilot on my own and when we went to series, Anne-Marie and Caz got on board. They were brilliant because, like me, they’re from working-class backgrounds and they have friends who are just like our three main characters. Because Little Mom has lots of series, we had storylines to pick and choose from and we also ended up going off on our own tangents. There’s a cultural difference so some stories wouldn’t have worked here, but it was really good to have those seeds and that structure. We met the Little Mom guys on zoom, and they liked what we were doing.

What does the Hull setting add to Hullraisers?

It was hard for me because I’m trying to make comedy out of an area that’s massively underrepresented. What Hull needs is role models that are successful and entrepreneurial. It’s not a hard northern town. It’s actually really creative, really European and there’s a young energy there. It’s been a tremendous weight on my shoulders. My granddad was a painter and my mum writes. They’re working-class but they’re creative. It was important to me that the main character was very arty, but a bit stuck.

Was it important to you to have working class characters?

Yes. My whole career has been about talking about Hull but equally, you don’t make all the decisions when you make a TV show. It’s totally been a group effort. I’m really proud of it because I feel like everyone was on the same page with the class thing. There are a lot of production companies that are very London-centric. They’re wonderfully intelligent, vibrant people, but maybe they wouldn’t be able to picture what I mean. We see so few authentic working-class representations, especially in comedy, I’ve had so little to refer to and that annoyed me.

What’s the relationship like between the three main characters?

Our actors are brilliant. We did a lot of chemistry reads and that was the most important thing at the heart of it. You never really know until you start but, thank God, they hit it off. That’s important because there’s always a love between the women that’s coming from a pure place, even if they’re slagging each other off.

Why did you want to explore the challenges of motherhood?

I was actually a bit the other way. We’ve gone through that whole media type thing of, ‘Let’s all be honest about how hard parenting is, it’s okay to be a s**t parent’. I wanted to show them being amazing parents, because I was a teacher, in safeguarding. I’ve worked with very vulnerable families and they learn parenting from TV so this has to show good parenting. The producers made me relax a bit by saying, ‘It’s okay, Toni or Paula can say “They’re doing my head in” because that’s truthful, and there’s enough love and connection between them that will come through’. I had to lighten up and say, ‘Okay, so that doesn’t mean people are going to be mean to their kids if they watch this’!

Why did you want to write about Rana unapologetically loving sex?

Having casual sex is like fitness for her, a hobby. She does have a bit of a reckoning where she tries to work out, ‘Am I being manipulated?’ but she decides, ‘No, I’m in control’. I was also inspired by watching 24 Hours In Police Custody. There was an officer who was leading this really aggressive man in handcuffs, and she had false eyelashes and a smoky eye. I was like, that’s not for anyone but herself. She’s not trying to impress people she’s got in cells. I learned more from watching this police officer than from reading Germaine Greer. That was the inspiration for Rana.

The women get into quite specific messes. Were any of those based on real life?

So many! The scene where Toni goes for a rare night out was me. I did a YouTube tutorial on how to do contouring so that’s gone in the show. I looked like Pinocchio. The one where Rana sleeps with a football mascot, that was my friend who thought she’d slept with someone from Hull City, except it turned out he was from the cub team. The pole dancing was me as well. I couldn’t hold my own body weight and it was so unsexy. There were all these women doing this sexy stuff on the pole and I was just hopping around the bottom like it was a maypole because I couldn’t do it.