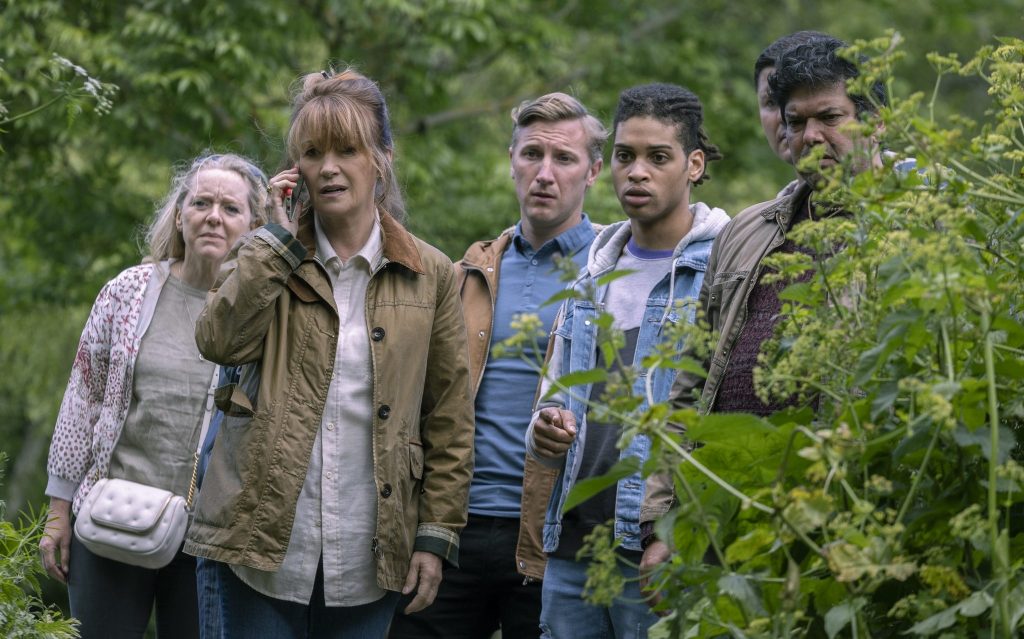 Award-Winning Actress Jane Seymour stars in Harry Wild, a new Acorn TV Original murder mystery. Jane stars as Harriet “Harry” Wild, a retiring university literature professor who is finding herself at one of life’s crossroads. Jolted from a mugging, she reluctantly agrees to recover in the home of her son, Charlie (Kevin Ryan, Guilt, Copper), a senior police detective. Harry soon starts to interfere in a particularly bafﬂing murder case…

Jane tell us more about the series.

Can you describe your character in the series?
Harry’s a retired English professor from Trinity. She’s a very independent woman. She’s never been married, she has a son. She does what she wants, when she wants, how she wants – and she is somewhat unconventional. When she retires, she thinks she’s going to be bored to tears and suddenly finds herself becoming a detective and a rather good one too.

Her sidekick is this wonderful young man, Fergus. So her great talent in life is to be excited about English literature – about any literature, about history, about all of these things. Now she has a kid who grew up on the wrong side of the tracks, who never really got to pay any attention to education, was about to quit. She has a chance to really teach him one-on-one, while he teaches her how to manage the life of criminals, crime, and the street.

What have you enjoyed most about playing your character?
Harry is a unique character in that she’s such an independent woman, such a brilliant woman, and at the same time, I think she is what every woman really deep down would like to be – you can make all your own decisions, you’re not relying on a guy. You can be who you want to be, when you want to be.

She’s got a great self-deprecating humor, but she’s always right. Harry is always right, which is really irritating, but she likes to solve issues, solve problems. She doesn’t have any time for idiots or for kinds of people who are doing really bad, sick, horrible things. So she will bring them down with great glee.

How has filming been in Dublin?
Filming in Trinity was really special for me because that is who she is. She was a professor from Trinity, and it was great for me because the actual people at Trinity let me look at the Book of Kells- they took me into the library when no one was there.

I’m walking through there and it just felt like, wow, this is my home. This is who I am. I’m an English professor in this amazing university, it’s a beautiful university. And it was just great too, because when I did the opening sequence, that was where I quit. It just felt it was real.

I was in a real university at a real podium, talking to what looked like real students, and it felt very special. I’ve never been to Trinity before. Obviously, I went to Oxford and Cambridge, and at one point we were thinking of shooting this in England. And then they said, why don’t we do Ireland for Ireland?

And I thought, well, it’s pretty cool. And they said, well, we’ve got this great college called Trinity. And it turns out that a lot of my really good friends actually graduated from Trinity. So Trinity was really special.

How has it been to work with an ensemble cast?
I would say that one of the most incredible experiences for me on Harry Wild is the casting. The casting director [Frank Moiselle] was a genius. I mean, literally every day another actor would come on, and I go ‘oh my God, I got to [step up] my A-game here because this person’s like off the charts.’ Brilliant. I mean, every single one, there was not one person that came in [who] wasn’t way better than the part they were given. I mean, there were so many people who would come in, and it would be a great role, but they take it out there. I mean, it was just extraordinary. I kind of stood back and went ‘fantastic.’

Obviously the most important thing when we were doing this was to find a really good Fergus. And they showed me the tapes of different contenders, and there was no question. Not one millisecond did I even consider anyone other than Rohan. I mean, I saw him, and he just jumped off that screen and I went, ‘oh my God, that’s Fergus’.

Then when I met him, of course, he’s a Brit, right? He never speaks in a British accent ever. He speaks in this perfect Dublin accent all the time. And we’ve had a lot of fun working together because people who come and work on the show, you know real Dubliners. They come in and they’re trying to figure out what school he went to, which street he lived on, which tiny part of Dublin he’s from, and he never loses it. They are absolutely flabbergasted every time we tell them, you know, that he’s not Irish at all, that he’s never done this before. So he’s wonderful to play opposite to. There’s a real rhythm that we have and that doesn’t often happen. So, we’ve got really, really lucky.

The two of us just get along famously. It was [during] COVID, so there were lots of things we couldn’t do, and times we weren’t supposed to be together. So we’d always find a way to meet in the great outdoors and rehearse. We spent a lot of time really working on our characters, working on our rapport and how we were as a team.

It really paid off because when you come and you work this fast – sometimes 8, 10 scenes a day. We don’t have time to rehearse here, so we would rehearse on weekends and then bring it and do it.

What has been your favorite scene to film?
You know, it’s really hard for me to answer that, but I think the speech that I gave at Trinity when I quit, that was just beautifully written. And I think that really encapsulates the whole essence of who Harry is – when she says at the end of it, she said, if you’d paid attention, you would realize that the scientists and mathematicians can tell you how we’re here, the historians can tell you when, but only literature can tell you why.

And I thought, yep, that’s it. That’s Harry. So I think that was really good. And then of course I really love when I do all the playing the little old ladies or the crazy Scottish lady, when I go in disguise. My disguise for Harry is she doesn’t actually disguise – she just wears her own clothes and puts her head scarf on and sort of contorts her face and start speaking with another accent. So I had a lot of fun with that.

It was kind of fun doing the stuff in the pub, and because Harry drinks too much red wine and obviously she’s supposed to smoke all the time too. But since I don’t smoke, we’ve had to kind of fudge that one. One person had a scene in which they were smoking, and I wasn’t even that close to him. I could not breathe. I was coughing like crazy. So it’s a good thing. We didn’t have me smoking – that could have stopped the entire show.

What have you enjoyed most about filming Harry Wild?
My absolute favorite thing about this whole experience has been the crew and the directors and the writers, and literally everyone – this is a family that we’ve created. This is an extraordinary working situation that I’ve never had anything quite like this. I mean, I’ve had great sets and, you know, great experiences on film, but this has just been flawless.

It’s just been amazing from top to toe. I mean, whether it’s the drivers, the electricians, the hair and makeup, the writers, actors, producers- everybody has come into this with their A-game, and everyone has a great sense of discipline. Everyone’s on it. You never have to ask anyone to do anything-no one ever has an attitude, not that I’ve ever seen.

It’s a very non egocentric experience. Everyone is there to make the same thing. We’re making a great series. It’s just wonderful. It feels very safe.

The other thing that I love is actors come in and they’re always like scared, especially when they only have one day’s work. And I remember, I know what that feels like. It’s horrible because everyone knows one another, all joking around and you come in, like, I don’t want to screw it up. So we’ve got the sort of thing where we all get together and we run lines with one another and we put everyone at ease, so that by the time we come up and do the scene, they’re part of the team. And I think that is really important.

Harry Wild is available to stream exclusively on Acorn TV from 4 April.