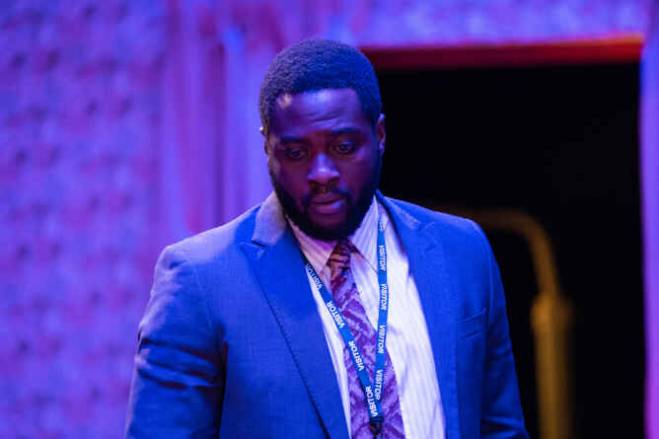 Who do you play in Landscapers?

I play Douglas, who’s the solicitor for Susan Edwards, Olivia Colman’s character. He’s someone who is very rule abiding, which is obviously a bit of a contradiction, considering what his client has done. But to the best of his abilities, he tries to follow the rules and pursue human connections as well. That’s what draws him to Susan and Chris away from the case – it’s the human connection that they formulate.

What is his assessment of Susan and Chris?

I think he just sees them as the kind of people who’ve got themselves into a situation, as opposed to bad people. So as an actor I just locked into that and went, ok, look for the humanity in these people and go from there.

Was that easy to do given that in the eyes of the law they are murderers?

Well, yeah, it is tricky. But, for Douglas, it is a part of his job: sometimes you get the people who are innocent and sometimes you get the people who aren’t. For him, he was just doing his job, and for me I found it easier to lock into that, to try and just focus on the fact that this is something that you would have had to have done – whether he agreed to do it or not, that was kind of irrelevant. Add to that the fact that you’ve got Olivia Colman and David Thewlis, who are two of the nicest people, playing the roles of Susan and Chris – it kind of makes it easier to go, ‘Well, these people are really nice’… because they were.

What research did you do into the role?

The role of Douglas is based on Susan’s real life solicitor, which Ed Sinclair considered when creating the character. In terms of actual research, because I wasn’t necessarily playing him – I was playing a version of him for the purposes of the show – my research was more to do with stuff that he would or wouldn’t have known in the case. In short, I did as much research as I could without spoiling the story for myself because I wanted it to be as accurate as possible.

What would the solicitor’s role be in a case like that of the Edwards’?

Once they’ve been arrested, they get the choice of solicitors provided by the police, and they can either say yes or no to them. In this scenario, Susan said, ‘Yes,’ pretty much to Douglas straightaway. The solicitor’s role is to get all the facts of the case – the things that happened from the point of view of my client – straight, so that you can’t argue with them. Then you go, ‘Okay, great. These are things that if we do go to court, this is what we can argue for or against. Anything else that doesn’t have anything to do with those cold, hard facts is irrelevant, because then it gets tricky.’. It’s not his job to judge them – it’s completely the opposite. It’s his job to just present the facts of what happened.

And yet he did make a connection with the Edwards?

He really, really did – in our script, anyway. It’s a credit to Ed [Sinclair] that he’s created such interesting characters and once you watch it, it’s hard not to make that connection as a viewer because they have such humanity. You go in thinking, ‘Wow. This person’s a really great person. But they’ve also done a horrible thing.’ And that’s a challenging conflict for the viewer.

Did you know the Edwards’ case beforehand?

I had no clue about the case. I was fascinated when I read about it for the first time. I’m a bit of a curious person. So I was like, ‘Okay, this is interesting.’ Then you go a bit further and you look at things, and now having had the experience of doing a fictionalised version of it, I understand a bit of everybody. And I think I understand why something might have happened and why they might have been found guilty and why the solicitor might have made a connection with them. There is a difference between being a murderer, a serial killer, and being somebody who’s just found themselves in a position where they’ve done a bad thing. That’s what I looked at when I was thinking, ‘How do you defend these people?’

What was it like working so closely with Olivia Colman and David Thewlis?

They’re the best people; they’re so talented. For me they are two of the greatest actors to have ever come out of this country and they’re just the nicest. Spending so much time –more so with Olivia than David – and being able to just chat and form a connection, a friendship, that has been such a blessing. And such a privilege as well.

What type of show is Landscapers?

Well it’s definitely not a true crime story as we think of them and that was one of the big draws for me. I’d say it’s like a magical dive in to the minds of two people. I had this magical feeling once I read the script, and I hope that translates on screen. Obviously you don’t get to see certain things that Will and the team have chosen to do until after the edit. But I had a sneak peek of episode one the other day and then you realise, ‘Okay. It’s such a jigsaw. But Will’s really put it together in a way that I just think is amazing. Just the minds of these people are so creative. And it’s a blessing to be able to be part of that.