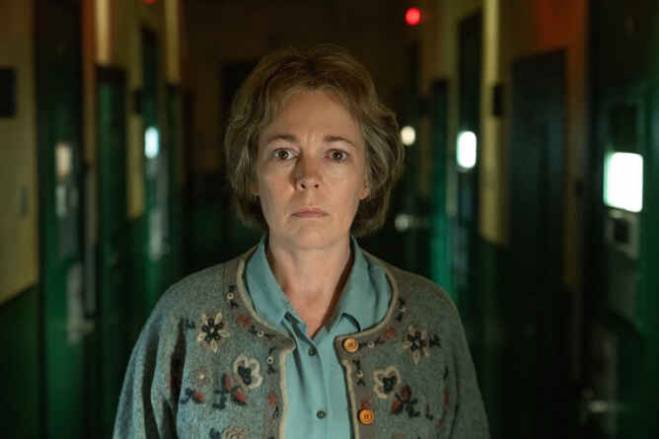 How did this role come about?

Ed [Sinclair, creator, Olivia’s husband] wrote it. And so I did it. He was looking for something to write for me, which is very nice, because this was started years ago. And then in the interim I’ve been very lucky but Ed was still writing this because he got totally into it. And it was just a part that I wanted to play – just purely from an acting point of view it was a great opportunity to play someone like that. And he’d written it beautifully. Every actor that turned up on set said, ‘Oh, my God, the scripts are amazing.’ From an acting point of view, it was like a dream.

It’s about a couple, the Edwards, who we know from the very beginning have committed a crime – they’ve committed a murder. So you automatically go, ‘Bad! Oh, awful people!’ But then you look into it more and you see that they are two gentle people who are very devoted to each other, and in love. You don’t know what happened that night [when Susan Edwards’ parents were murdered]. But the fact that there’s historical abuse, that she was abused by her father: that does something to a person. We know now that if this happens to you as a child it might not come out until you’re an adult. But for some reason in Susan’s case that was thrown out of court as impermissible evidence I think Ed, as an empathetic person, wanted to tell a story. It might not be exactly their story, they did murder people and they did get away with it for 15 years. But I don’t know what any of us would do in those situations.

To what extent is this a love story?

It is a total love story. He was her knight in shining armour. He took her away from this place that she was so unhappy about, and he has done nothing but stand by her side. They’ve really got each other’s backs.

Landscapers is not your standard True Crime series. How does it tell that story?

It’s quite hard to describe – there’s intrigue, there’s crime, there’s, ‘Why the hell did they do it?’ And then it goes quite fantastical – Susan loved 1950’s Hollywood movies and as she retreats into her mind to find a place where she feels safe, they all become cowboys like in High Noon for example. It’s sumptuous; there’s so much in it, so much imaginative stuff at play. It’s not your average true crime drama. I haven’t seen anything like it before. I’m so excited.

Why did you want to play this part?

Firstly, I remember reading a first draft and realising that Ed, knowing me, had put in parts that I would want to play, scenes that I loved, the sort of stuff I want to do. So for me I was excited about the screenplay, rather than the actual people – the Edwards – that he had been so involved with.

Beyond that I love playing that person who’s timid and shy and sweet but has something hidden and dark behind them. You don’t often get those characters in a script coming through your letterbox. I loved the fantasy nature of it as well. Had Ed had nothing to do with it I would have still really wanted to do this job, based on the scripts alone: they were just interesting, gripping and I couldn’t put them down. I know I’m not biased, because sometimes I will go, ‘Oh, God, I don’t like it,’ when Ed writes a scene. That’s a good litmus test as well. Would I have wanted to do it if Ed hadn’t written it? I definitely would have done. But I can only see it in Ed’s hands because not many people would have been brave enough to go for something with this massive imagination and scope. I don’t think anyone would have written it as well as Ed.

What sort of person is Susan?

She’s a perfectly straightforward, normal, shy, quiet, youprobably-wouldn’t-notice-her-walking-past-her, introverted, devoted wife, who was brought up under really extraordinary circumstances. Humans can put up with enormous amounts of torture, but at some point they can be pushed to do something you never would have imagined that you’d do. Susan is that quiet person who has absolutely been pushed. Now none of us will ever know what happened that night [when the Wycherleys, her parents, were killed]. But we do know that there were historical issues of abuse. And God knows what that does to someone.

What research did you do in to the character?

I always do just stick to the script: a good writer has done so much work already. But we did meet the real Douglas [Susan’s solicitor Darrell Ennis-Gaynes]. Ed and he got on really well: he’s an incredible guy, who is everything that Dipo [Ola] has played. Douglas’s background and the fact that as a youth he did the wrong thing and then decided to change his ways and to help other people is absolutely real. We met him and I said, ‘What’s her voice like?’ He said, ‘Well, I think she sounds exactly like you.’ Okay, great! Whether or not that’s true I don’t know – he might have a terrible ear for accents, not sure. So I just did my voice. But I’ve never heard her, I’ve never had any contact with her, never seen any of the interviews. I was left to just make something up really. Quite fun.

What is your take on Chris and Susan as people? They come across as empathetic. Yet they are murderers.

I think anybody could be a murderer if really pushed. Almost anybody. That’s why it was so awful that Susan’s sexual abuse as a child was deemed inadmissible and historical. Because we all know that if you try and pretend it never happened as a child, it comes back to bite you as a grown up.

Ed was always wondering who Christopher [Edwards] would be and then I can’t remember how it came about – maybe Ed first thought of David or someone suggested him, but we just went, ‘Oh my God. Yes!’ He was just a joy. I did some sneaky asking around mates who I knew had worked with him. And they went ‘You’ll love him. He’s lovely.’ So that was already terribly exciting: it’s very important to like who you’re working with. Life’s too short, you know?

What was it like working with your husband as writer?

Once he’d written it then the hard thing is handing it over to a creative team who are going to also put their stamp on it. It’s a learning curve but we sort of left each other alone – he has his job and I have my job. So for example he’s seen all of it but he’s never told me what he thinks of my performance. We’re very honest about how this wouldn’t happen in a normal writer/actor relationship, so I don’t want to change that. I like our roles being separate. I think we both admire what the other one does – I love Ed’s writing but I wouldn’t dare to get into his writing process. And God help him if he tried to tell me how to do what I do.

You said the part was written with you in mind. What was it like to play?

There were some bits in the script that I was excited to try and then when it came to it, actually it was much harder than I thought. There were bits when they’re in the ‘other world’ where she goes from being highly upset to talking quite calmly to the police officers. I really wanted to flip between things like that – when I first read it I thought, ‘Wow, when do you get to do that ever?’ But actually, in practice, it was really hard. So there were moments like that, which he wrote thinking I would enjoy those kinds of shifts. And I did enjoy it. But it was harder than I thought it was going to be.

Would you do it again?

It’s such a long process and as an actor you don’t realise that – the actors are the last people to come on board normally. I’ve watched Ed work away at this for years. And absolutely, if he wrote me anything, I would do it again because I love his writing. I’ve always been his biggest fan. What’s lovely is that the first time he showed people the script they went, ‘Oh. Oh! Bloody hell, it’s amazing.’ I knew it, you see. I told you so!