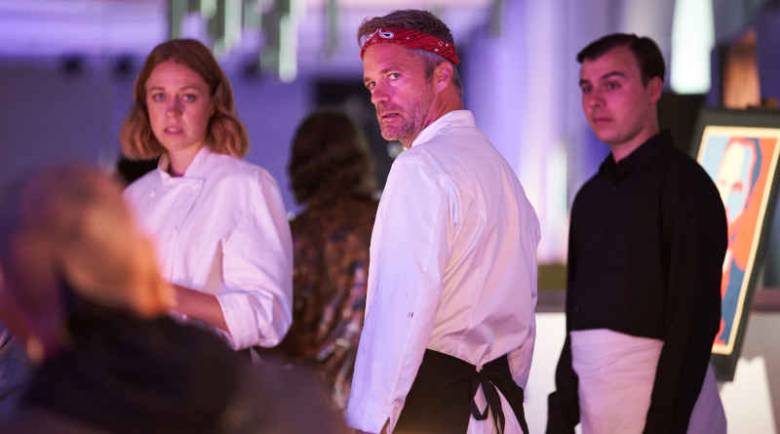 How would you describe Live At The Moth Club ?

I’ve been describing Live At The Moth Club to people – and they seem to understand what I’m saying – as a real-life The Muppet Show with humans and the best comedy brains in the UK. That does it justice, because in The Muppet Show you have a backstage narrative with the Muppets wrapped around amazing performers on stage. The description resonates with people.

The ambition was to have an ensemble show and I don’t feel the UK, despite all the amazing talent, has quite nailed that type of Saturday Night Live telly yet. I’ve always wanted to make and, first and foremost as a comedy fan, watch that kind of ensemble show, and Baby Cow felt like the perfect home for it.

Where was the idea for the show born?

The Knock2bag live nights with Seb and Dustin from about seven years ago were an early genesis of the show, because the first live gig we did at Moth Club was called Cardinal Burns Presents.

Back then the live circuit was becoming a bit boring and safe. There weren’t many homes for character and sketch comedians or places which had an atmosphere which welcomed performers to – for want of a better phrase – f*** about and try material out. What we wanted for that night was to have an ensemble, so Jamie Demetriou, Natasia Demetriou, and Ellie White all became residents, and we had like-minded people come and go every month.

When did you hit upon the idea of having a mockumentary layer to introduce storylines?

There were mockumentary elements in a pilot we filmed, but in that version of the show Tash and Ellie played multiple characters, like you might see in Saturday Night Live. In the end we decided it should be more like a sitcom about the club. That makes it more real and believable for an audience, and the best way to make it more real is to film it in a documentary style.

Ben Ashenden and Alexander Owen, the writers who I brought in to tie everything together, suggested it be more like a documentary with regular characters the audience can fall in love with. We were all on the same page.

Why is the Moth Club so special to you and why did you want to share it with everyone?

The Moth Club is an amazing venue for comedy, with its low gold ceilings and an indescribable energy in its core. There’s a carefree, anything goes attitude in the place – the director of photography described it as being a weird secret club which you might find by accident.

The history of the building is fascinating, as are the people who work and go there. There are two bars in the venue; one bar is for the members and is full of old boys and war veterans, and then in the other bar there are all these young people watching live music or comedy. It’s a cool collision of two worlds.

Is a night at the Moth similar to its on-screen depiction?

Yes, it’s similar, and it has the same spirit and policy of booking sketch acts, character performers, and stranger acts. There’s the same party atmosphere and people don’t head straight home after the performances are over.

How challenging has it been to capture the energy of a live alternative night on TV?

I used to work on a show called Nick Helm’s Heavy Entertainment. We built a club in a basement and it had an amazing atmosphere, which was down to bringing in the crowds and the way we recorded the show to make it feel like viewers were there. We made good inroads there and I’ve brought some of those processes to Live At The Moth Club.

We’ve avoided loads of audience shots and we’ve stayed with the acts on stage, because ultimately, it’s about them. We’ve captured the fizz of a live club night and there’s nothing else like it.

What was your approach to filming?

Live At The Moth Club is filmed in a documentary style and we treated filming as if we just happened to be there and caught those moments on camera. We didn’t film any retakes and we even want to keep any mistakes – but there aren’t any disasters. We made a choice to run the filming as if it were a live gig. I went into the dressing room and told the acts to treat it like a gig, because it could be nerve-wracking for the newer performers.

I’ve worked really closely with Ed Tucker, our director of photography, who’s just worked on Channel 4’s Don’t Hug Me I’m Scared. He has a different sort of brain, which in a weird way is quite advantageous, because he didn’t go and see much live comedy in the build-up to filming.

How vital is it to have a platform like Live At The Moth Club for alternative or more experimental comedians?

That’s always been top of the list, for me. It’s really important to capture those alternative voices and give them a home and, hopefully by creating that home, make them more accessible to a larger audience.

Are any of the characters based on people you’ve encountered at the club?

Ben and Alexander, the writers, have played the club and have known me for years. When we were entering the writing process, they basically interviewed me about all sorts of things which have happened there and those stories inspired storylines.

One small example which runs over the series is how Jackpot – the bouncer played by Arnab Chanda – tells the crowd the venue is under the threat of losing its licence. That’s true, because of new local residents who have complained about the noise. Over lockdown the venue was closed for two years and there was lots of local development. People moved in; thinking it was this quiet place, and when the world suddenly woke up, they found they hadn’t moved into a quiet place at all.

What excites you about the current wave of up-and-coming comedy talent?

There’s been a real dearth of sketch or character comedians breaking through, so I’m always intrigued by those acts who can then go off and produce big, authored pieces.

Freddie Meredith is an example; I saw him on Instagram during lockdown and asked him if he’d ever performed live. He’s an actor but hadn’t performed live comedy, and he made his debut at Moth. Those are the sort of acts and voices I’m looking for.

How much would it mean to you if Live At The Moth Club became known as a place for establishing new comedians?

I’d like to think my career has been about discovering those people, and to have a home where you can showcase multiple performers is a blessing. It’s amazing.