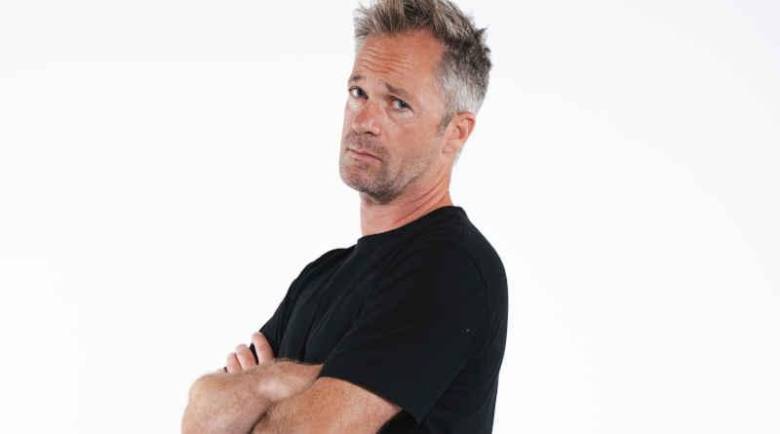 How would you describe Live at the Moth Club?

We started playing the Moth Club with Rupert back in the day and our residency always had quite a spontaneous feel – the live nights had an unplanned flow to them and that comes across in Live at the Moth Club. We always found it interesting how what was happening behind the scenes was sometimes as funny as what was happening on stage, and this brings those two worlds together.

How did you find returning to the Moth Club and playing a version of yourself?

I mean, it’s slightly odd. We’ve stopped performing live, so the first time we returned to live performance was actually being filmed, which we found quite odd. To film this series has been so nice, because it feels as if we’ve captured that whole period when we were producing those live nights at the club with Rupert. This does all feel a bit like a time machine; watching it is bizarre, because it’s almost like watching your life replaying on screen.

Did it feel like you were making a TV show?

What was brilliant is that performing on stage didn’t feel any different to a live night. The placement of the cameras was all quite subtle, as was the lighting, so it was like a live night at the Moth.

Rupert wanted to create that sensation, so the place wasn’t overly lit, filming wasn’t overly staged, and, if things went wrong, that would be captured. That’s what makes the show exciting, because when you go to a comedy night part of the thrill is that some of the night might not work. The show has the feeling that if something doesn’t work, it’s all going to go in.

This is what sets it apart from other shows which have a slickness to them; what I love about the Moth, in regard to the venue and how the show is filmed, is that it has a rough and ready quality, which is what you find at smaller comedy venues. Rupert was trying to bottle that characteristic.

There’s a real mix of established talent and rising talent – has that always been a part of Moth’s ethos?

That was always the way with our night, where you’d have a mixture of people who are established, like Harry Hill, and then people who are up and coming. That mix makes the night so fun, because you have a bill of acts who you just find funny and it makes the night more likely to surprise, too. You might discover someone you’d never seen on TV before.

To have that platform is really exciting, because I don’t think there’s anything out there at the moment where you have that mix. This show is a great way to discover new performers who are experimental and see an alternative to mainstream comedy.

Are some of the characters influenced by people you’ve met over the years?

Mark Heap’s character, George, is someone you would meet at the Moth – a funny guy who’s set in his ways. Alex [Owen] and Ben [Ashenden] wrote the backstage scenes and have brilliantly reproduced the backstage vibe.

Many of you in the core cast work together regularly – how did you all meet?

I first met Jamie up at the Edinburgh Festival after seeing one of his shows, and then obviously through him met Tash and Ellie. When we had the residency, we thought it would be nice to have a group, so Jamie, Tash, Ellie, and us became a little comedy group. For the show Rupert suggested we bring that core group and expand on it.

How exciting was it to be able to include signature extravagant Cardinal Burns sketches?

That was such a fun opportunity because, since the sketch show, we haven’t performed any sketches apart from live material. Rupert gave us a free rein and we had an idea about bad low budget filmmaking.

We haven’t done anything like that for a while and, in fact, the first Inzane sketch we filmed was screened at the first Moth night we ever did. For our first night we arranged a mixture of live performances and shorts made specifically for that night, and on that night, we held a Q&A playing the filmmakers of that film.

Weirdly, years later, we were able to carry on with Inzane. To come full circle is so nice.

Why is the Moth Club so special?

We all found the club is a place where two worlds met; on a Thursday night there’d be the old world of a bingo night and the next it would be full of comedians, many of them up and coming. How those two worlds collided was always entertaining.

This is a place which harks back to an old London, which you don’t see too much anymore, and it has a lot of character; one night there’s bingo, a few nights later Lady Gaga would perform there. It’s a very unpretentious place.