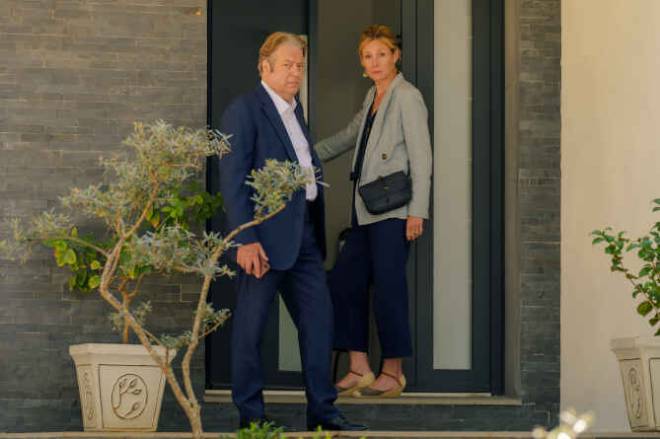 Why did you decide to bring the Verlaque and Bonnet Mysteries to the screen?

We were looking for a lighter crime series to work on, something that would be sustainable and hopefully a returning series. Obviously, crime in a beautiful place always works really well on TV, and it occurred to me that we have Vera in Northumberland and Inspector Morse in Oxford, but you can also shoot in beautiful locations beyond England.

You can set a drama in Europe and still use the English language by suspending your disbelief, so when I came across these books I thought they would be great for television – where’s a more beautiful place in the world than Provence?! I liked the relationship between the characters and the books seemed to have all the ingredients for something that I would want to watch on TV after a long day at work. You just want to sit down and see a beautiful place on your screen that’s enjoyable to look at, with an interesting crime and good relationships, so it felt like a winner.

I’m a simple producer – I don’t have the imagination of a writer or director, so it’s been so lovely to see this series come together, and it has become even better than what I had in my brain, which is very satisfying!

Do you think there’s a demand for crime drama that isn’t too gritty?

Yes, my partner has long days at work and often I come in to find him watching Vera – he tells me he’s exhausted and he just loves looking at the scenery. There’s a real demand for crime stories that you can follow, but that also allow you to quickly answer a text, you don’t have to follow every single second of a complicated plot. Sometimes you just need those shows that are easier on you – they don’t need to be facile, but you don’t want to come away feeling depressed from an intense show, the drama just leaves you feeling soothed instead. We wanted the crimes in Murder in Provence to be taxing enough so that you feel satisfied at the end, but nothing torturous, you shouldn’t have to be a mastermind to follow them. We do like it to be challenging enough so that you feel a little bit clever at the end, but not ridiculously complicated.

Did you make many changes to the books?

When I raised the idea of adapting these books, we went straight to Shelagh Stephenson, a fantastic writer we’d worked with before. She actually lives in Provence too, and has exactly the right kind of dry humour for this. She immediately fell in love with the books, and it was her idea to make the lead characters a little bit older for the TV version, because that’s something you don’t see on screen so much – a romantic relationship with slightly older people. Quite a lot of older people watch television and of course they like to see themselves reflected back on screen – we all like to see our own issues, concerns, triumphs and joys affirmed in what we watch, so I think it’s really needed.

Did you ever consider using French actors, or French accents?

No, we made those choices really early on, because we’ve seen other shows fail by doing that. We didn’t want a Euro pudding where there’s lots of different accents, and we didn’t want the show to turn into ‘Allo ‘Allo, so we felt we just had to take a very bold step and suspend disbelief. They are all French characters, but they’re speaking English. Then we established a set of rules, so a Duke or Duchess can speak in a posher English accent whereas a delivery boy is going to speak in a more estuary accent because those are the conventions that work, people understand them.

The trickier stuff is matching the exterior world with the interior world – you think, “Well is it OK for them to be speaking English, but when they go to buy a loaf of bread it says ‘Boulangerie’? How do you work all of that out? So, in general, signage is French but you avoid anything that’s going to really jump out. We still had lots of conversations as we went along – what about texts on the phone? Or the language of the cash machine? So you have to go back to your rulebook, and I would always defer to Shelagh.

At one point Shelagh did say to us that she loved what we had filmed so far, but she commented that people don’t just drink wine all the time in Provence – she said, ‘Every scene, someone’s got a glass of rosé in their hand!’ So maybe we got a little bit over-enthusiastic with the wine to start with but we toned it down!

Some British productions use other countries to double up as France – how important was it for you to film in the real Provence?

That was a really big thing for us. It’s a familiar trope in television when you say the location is a character, but when you say that you really have to mean it. Provence really is a character for us, and we wanted to shoot it. Yes, you could probably shoot it somewhere else and get away with the believability, but you would lose a lot of the beauty. Malta just isn’t Provence. Provence is one of the most beautiful places in the world, painters and photographers head there for a reason. So we really wanted to get a lot of that beauty on screen, not to mimic it, but to be in the right place.

What were the greatest production challenges when filming in Provence?

Well, first of all, we had the challenge of Covid. We thought at one point we would have to change the title to Murder in Didcot, because that’s where we were shooting all the time! We decided early on to film interiors in the UK for economic reasons, and shoot exteriors in Provence, but of course when Covid happened we moved as much as we could to the UK. At that point we were legally not allowed to film in Provence, but we kept the hope that we would be able to – at one point, we had to make a gamble and put a lot of money down for hotels while it still wasn’t clear whether we’d be able to go. We just knew we had to shoot in Provence so we hoped for the best, and we got four weeks there in the end. We had a glorious time – there was no shortage of people who wanted to go on the shoot!

Luckily the weather is more reliable than in England! We were shooting in September, so we were fairly sure that we would get some sunshine. Shelagh keeps saying she’d love to write an episode set at Christmas because she tells me that Provence does look beautiful in the winter too.

How did you decide which locations to use?

One thing we wanted to do was to feature as much urban scenery as countryside. Funnily enough, although fields of lavender and sunflowers are all lovely, they can also look quite familiar and as if you’ve just played a lot of footage from a picture library or the tourist board. So we wanted to show all that beauty, but also make it look and feel quite particular to our series. I love all the shots of pigeons on church steeples and the old shops, all the cityscapes look so beautiful. I love all those stone buildings, which feel so sun warmed. There’s just something very restful on the eye about watching the show and imagining yourself having a completely different life in Provence.

How quickly did the casting come together?

Well, Roger Allam was a given from very early on. When we first spoke to Shelagh, one of her very first ideas was to make the characters a bit older and straight away she said she was thinking Roger would be amazing for the judge. Roger is a really good friend of hers and comes to stay at her house in Provence every year. She asked us about casting him straight away, because she said the writing would be much better if she had an actor in mind, and she knew exactly how to write the whole series for Roger. We loved the idea, and so she asked Roger, who was totally into it. So a week after calling Shelagh we had our lead star, which was a great bit of luck!

The relationship between Antoine and Marine was also really important to us and we knew would be a big part of the show, but luckily when we found Nancy, chemistry was immediately apparent and we knew would shine through on screen. Keala was an inspired choice from our casting director. We wanted to do something a bit different and to have a very diverse cast – Keala’s character was male in the book, so we made the decision to change to female, and then Catherine came up with the suggestion of Keala. We’d had some very different ideas initially, but as soon as her name was mentioned it felt like genius. Keala was thrilled – it’s a very different kind of role to the ones she usually gets offered, so she could really flex her acting muscles. She brings so much to the table. I love seeing her on screen and the relationship between Hélène and Antoine is so fresh and different.

M.L. Longworth created the novels – has she been supportive of the TV adaptation?

Yes, she came to Provence while we were filming, and she’s just delighted. Her family are so sweet as well, they were really pleased to come to set. When we delivered the finished episodes to them, she wrote me some very nice emails.

What do you hope the audience will appreciate most about the series?

I hope they enjoy the humour because that’s what I really like about it. I’m a huge fan of Roger’s and I love his delivery in this. Roger and Nancy have worked together before on stage, and I think you can really feel their chemistry. I love the relationship between their characters and it fits the tone of the piece, their gentle teasing and flirting. Roger and Nancy really brought out Antoine and Marine’s relationship and it’s a real thing of pleasure.