A penetrating reimagining of the iconic and timeless Australian novel, Picnic at Hanging Rock, which premieres 11 July on BBC Two, plunges us into the mysterious disappearances of three schoolgirls and their governess on Valentine’s Day, 1900.

The complex, interwoven narrative charts the subsequent investigation and the event’s far-reaching impact on the students, families and staff of Appleyard College, and on the nearby township. Theories abound, long-held secrets are exposed, paranoia and hysteria set in, as in vastly differing ways the lives of our characters are changed for ever.

Tapping into our fear of the unknown, the series explores issues of repression and sexuality, freedom and suffocating respectability, speaks to notions of nationhood and identity, the old world against the new, nature versus order.

Nature is at the very heart of who we are. But can we ever control it?

Here Natalie Dormer who plays teacher Mrs Hester Appleyard (and who is in charge of the girls on the picnic) talks about the series and what drew her to it.

Tell us about Picnic at Hanging Rock…
For years people didn’t know the story behind Picnic at Hanging Rock – whether it was true and whether it had actually happened. A group of girls go for a picnic on St Valentine’s Day 1900 and three girls and one teacher disappear. What happened? Are they murdered? Are they alive? Everyone becomes obsessed and intoxicated by this mystery.

What made you want to do this series?
I was attracted to this project because of the script. I thought the way this whole community and school had been fleshed out between the lines of what is present in the novel was wonderful. And then of course what you have overarching the entire thing is this delicious mystery: what happened to those girls? What happened on the Hanging Rock?

There is a magic that we have very much injected into our reimagining of Picnic at Hanging Rock, one that is hopefully very faithful to the tone of the novel.

What was it like to film on location in Australia?
This was my first trip to Australia, so to stand in the Macedon region and look out over the Hanging Rock made a big impression on me as well. No acting required. I was overwhelmed by the beauty and scale of Australian landscape. The Australian landscape is a character in itself in Picnic at Hanging Rock. It has an overwhelming power and informs a lot of the characters’ journeys.

Who is Hester Appleyard?
There is no greater mystery than who is Hester Appleyard. She’s got something to prove. She’s come to Australia, as a lot of people did at the end of the 19th Century, to reinvent herself, to completely give herself a new identity. We slowly reveal the ghosts and the baggage of that past – who she is and this little kingdom that she has created ten thousand miles away from home to hide from her past.

Picnic at Hanging Rock premieres on BBC Two on Wednesday 11 July at 9.05pm.

SHOWTIME announced today that Charmaine Bingwa (The Good Fight) and Nkeki Obi-Melekwe (Tina -The Tina Turner Musical) will star, and...

Descendant tells the story of the Clotilda – the last known ship to smuggle stolen Africans to America – the... 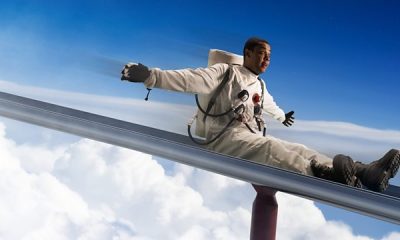 You Only Ate Burgers: We would run out of land if everyone in the world only consumed cheeseburgers, and even...