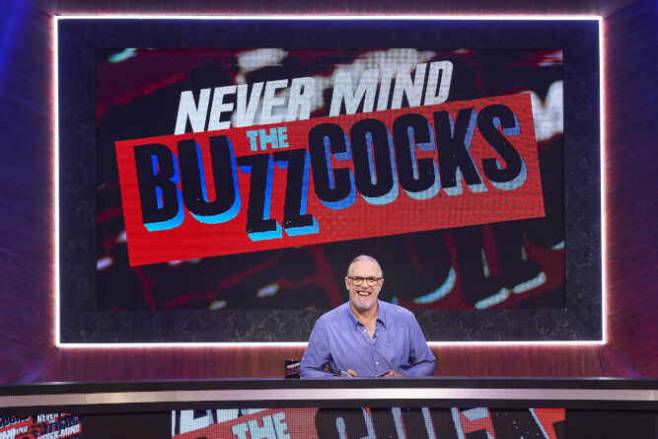 What did you think when you heard that they were bringing the show back and they wanted you in the hot seat?

Well, I was delighted, I’ve always been such a fan of Buzzcocks. They went through a phase of having guest hosts a few years ago; I was asked to do one and loved it, so when Sky offered me the job it wasn’t a difficult decision. I’d worked with Daisy, Noel and Jamali so was excited by the team too so I knew it’d be fun.

Given that you’d hosted the show before, did you feel any pressure coming back?

There’s always pressure that comes with being the host and things filtering through you, but It wasn’t long until we built up a head of steam as a group, hosting becomes less ominous as it goes on. And having people that funny on your teams makes it less daunting. Certainly, for the first two or three episodes, yeah, you do feel the pressure a bit, but we’ve got to put that pressure in context. It’s a music quiz eh?

How would you rate your musical knowledge?

I’ve been a music obsessive all my life, but someone once told me that the sign that you’re officially older is when you start re-buying albums that you had earlier in life. And that’s certainly been true of me. But that’s one of the many joys of Buzzcocks, I’ve got to meet and hear all these exciting new artists. I saw my doctor last week and he said since hosting Buzzcocks I’m medically 26 years of age and if anything, I look younger.

Things have really changed, I think, in the way that the musicians have to ply their wares, market themselves. So, it’s been a real education. You can expect a YouTube collaboration with me and Aitch the rapper any day now. Just as soon as his management return my calls.

Some people might say that like the music scene is perhaps not as wild as it was back in the Buzzcocks heyday, what would you say to that?

I’d say it’s just different, I don’t think newer musicians are repeating rock cliches so much. Who wants to chuck a plasma tele out of a hotel window? But they’re having a good time. I think the music scene has retained a lot of the madness.

The show has been off our screens for a few years now, why do you think now is the right time to bring it back?

Well, I don’t know why now is a particularly pertinent time to bring it back. I just think it’s a great show. It belongs on television and I’m just thrilled that we get to be the ones to bring it back. And you know, there’s not a lot of music shows on TV and whilst this might be a bit irreverent and perhaps not satisfy chin strokey, musos, we’re still focusing on the music. There’s not many shows that are music obsessed in the way that both Buzzcocks was and still is.

So, you’re still allowing musicians to show their true colours and just have fun?

Definitely. I think that’s one of the nice things, with a lot of bands, without naming names, their PR life is such that you’re presented with such a slick package. So, it’s so nice to hear them talk, to have them mess around, to show sides of their personality that they perhaps don’t get to show outside of their own lane. I’ve loved that, having pop stars on who perhaps would normally be very manicured but just come on and mess about and show different sides of themselves.

You’ve got Daisy and Noel as team captains, what are they like?

Well it couldn’t be a more ragtag bunch, really. The four of us, Jamali included, I just don’t know in what walk of life the four of us would ever come together. I don’t think we’ll be a successful team in any other field of human endeavour – just the visual of the four of us is preposterous enough. But I think they’re all great-so uniquely funny in their own ways. As we all got to know each other and as the show went on, we found a really ludicrous chemistry. I certainly do not do a good job of keeping them in check, of being in charge but I wouldn’t want to. It’s a very different vibe from Taskmaster where I’m all powerful. I feel like the teacher who’s gone to the pub with the kids and had a breakdown. There was often the feeling of a disastrous school trip to the whole thing.

Did they gang up on you?

There were times when they tried but they know that at any point I could physically destroy all of them. You don’t do 13 hours of Kung fu a day and not have a fearsome reputation. I thought I may have to roundhouse both Daisy and Noel at times, but it didn’t come to that. Look, it was chaos, ok? If it was a professional organisation and I was tasked to keep people under control. I would already have been fired.

Was there any cheating going on?

Yeah. There was a little bit of cheating and as we go forward with this show it’s something I will crack down on because I still have that teacher in me. I still want the games played properly. So I’m aware of the security breaches and while I’ve allowed them to get away with it for this series. Jamali is particularly guilty but it certainly didn’t help him in the intros round as you’ll see for yourselves.

The show has had iconic moments over the years, what vibe are you going for this time around?

I still think it’s fairly disrespectful, but nobody has left in tears yet. I don’t think we were aiming for a ‘vibe’ but we’ve ended up with preposterous chaos. Buzzcocks is a great format, and we have, I think, been true to it. I’ve don’t have it in me to go in hard on people but someone’s having the piss taken out of them for the vast majority of the recordings. There’s no malice in it. I don’t necessarily think it was malice in previous incarnations though – we just played the game. It’s a good game.

The thing about Daisy May Cooper is she is one of those people that once she goes, she really goes and there was one point in particular, we were both laughing over something so childish, so ridiculous. I don’t quite know why, but jeez. I must have tried to read the line out 16 times, but when I can hear her snorting away to my right, I haven’t got a fucking hope of continuing. Her laugh is addictive.

How do you compose yourself?

Well, I didn’t. None of us did and I should give a formal apology to the editing team really, because they’ll just have to sort that out because there were often times all of us were incapable of doing our jobs. But I think that bodes well. There was a lot of fun during filming. There was a lot of laughter in that room. I hope that comes across in the final shows.

What can you tease about the game’s fans are going to see?

There’s no point in trying to reinvent the wheel with something like Buzzcocks, it was a popular show for a reason. So really, the only changes are you’ll see different rounds that we haven’t done before, but we revisit things that will feel familiar to people in a good way, I hope.

It’s brilliant to have Noel as the mighty gothic bridge to previous incarnations. It’s a different group of people and there’s some different games but it’s very much Buzzcocks.

What would you say is the funniest thing you’ve learned about one of the others during filming?

The funniest thing I’ve learned? I mean, Daisy May Cooper, I’m not sure that there’s been a sensible moment in that woman’s life. I probably could piece together her entire childhood with the bizarre stories she’s been regaling us with, so I’m not sure I could pick out just one. Noel told a very sweet story about an Incredible Hulk toy, that stands out for me because I’ve previously not imagined him to have a childhood. I presumed he was born looking and sounding like that in some fairy palace above the clouds. So then when I hear about his obsession with his Incredible Hulk toy, that absolutely delighted me. I learned so much about Jamali that won’t make the edit that we’ll need another show, I think! I suspect you’ll never get it to find out what I’m talking about. Let’s see…

Apparently, Daisy is obsessed with ghosts?

I was already aware of Daisy’s obsession with ghosts and I mocked her for it, but then she played me some tapes that she allegedly made of the spirit world and even I felt a little bit unsettled by it. Basically, if there is an after-life I don’t want Daisy May Cooper to be a conduit to it.

She’s got tapes of ghosts?

Oh yeah, she’s recorded voices on her ‘ghost equipment.’ She’s got a full set of ghost equipment. She’s deadly serious. It’s a TV series waiting to happen that I am more than happy to co-host for free.

In the show you discuss pre-show rituals, do you have one?

Throughout my entire career, my pre-show ritual is to find the sweet bowl and eat all of it, regardless of how big the sweet bowl is. But I genuinely have tried not to do that this time but my new ritual is related to it. Our costume lady, Faye, brings me a sweat wipe. I am such a fat, sweaty mess because of my previous rituals that I have to artificially stop myself from sweating. I started with key areas but by the end of filming it was my whole upper body that I was wiping with chemicals. You’ll see that in the first few shows I sweat like I’m in the shower and then I suddenly stop and to this day, I don’t know where that sweat went and it’s sort of a bit worrying.

You also discuss stars who have bizarre hobbies, do you have any?

Yeah, but I don’t think they are bizarre. I don’t know if I want to say, I’m sort of worried about myself. Over lockdown, I started playing with Lego. I built the Apollo space rocket and when I finished it, I didn’t feel any sense of accomplishment. I just felt empty inside. I think I just stared into the middle distance for the rest of the day.

I’ve also developed an obsession with electric vehicles. I’ve got every single conceivable electric mode of transport including one of those hipster scooters. But I still wear my COVID mask whenever I go on it, and fool myself in to thinking I can’t be identified as a result. A six foot eight, overweight man on a hipster scooter. A cow riding one would be less conspicuous.