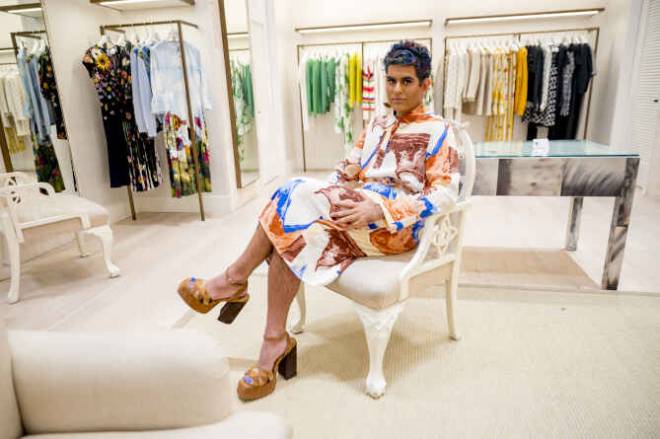 Features in Episode 4 What’s Your Gender? and Episode 6 Do You Think I’m Hot?

Can you explain your journey, that you talk about on Planet Sex with Cara Delevingne?

In my opinion, it’s a very funny thing living in the United States because on the one hand they say, “Be yourself” but when you do that, you get punished for it. It’s very much, “Be yourself within predetermined categories”. There’s always a limit or a threshold. So when I started to understand myself as non-binary I was like, “okay, I’ll be safe in New York City, that’s the safest place in the world for people like me”, so I moved there and I began to experiment with my self-presentation. I was wearing wigs and make-up, and I was met with a lot of resentment and backlash and street harassment: people throwing trash at me and insults.

It was heart-breaking for me because as a young person, I genuinely thought that would stop when I grew up, that people would stop behaving like they do in the playground. But then I realised that continues your entire life.

I needed to learn how to accept myself so I was able to take a negative situation to actually encourage me to do the more difficult work of self-acceptance, which I think a lot of people hold on the shelf or don’t ever explore. They’re waiting for someone else to validate them, rather than validating themselves.

When did you first start to realise you were non-binary or “different” from your peers?

I think I’ve always felt that, but when I was a young kid I didn’t really have the vocabulary for it. I just never felt like I fit in and I felt this deep sense that I was always watching the world, not actually being a part of it. From a young age I was a really precocious reader because I was like, “This reality that I’m living right now isn’t the only reality. There are other worlds. There are other cultures. There are other time periods. There are other histories.”

Now that I’m able to express myself fully I finally feel a part of the world. Back then I was really traumatised by the way I was being treated and the negative reaction I was getting from people.

How did your family treat you?

So the cool thing is, my parents were really accepting of me and that’s because I had an aunt who was a lesbian. She explained gender and sexuality to my parents and my extended family and she was clued into the fact that I was queer before I was. My parents were badass and let me wear what I wanted to wear.

As a young person, I could dance around, I could be free, but it was an issue when I started to interact with my peers at primary school and that was so destabilising for me. I felt shame and I had never felt shame at all about myself at home as I was allowed to express myself. And so then I just shut down and I didn’t even really tell my parents what was going on. I wanted to protect them and insulate them.

Things are changing, slowly. What is your ideal vision for the future?

I’d like to see a world beyond the gender binary. That doesn’t mean everyone has to be non-binary, it’s actually where everyone is allowed to determine what their own gender is. Gender is actually something that you own about yourself in your life, not something that other people get to tell you.

I’d like us also to recognise that there’s no single standard definition of what it means to be a man or woman. That’s something that you get to define for yourself. And I’d like us to recognise that gender is deeply felt and it’s deeply individual, and we allow people to tell the stories of who they are, rather than just collapsing them into categories. My bigger vision is allowing us to experience each other beyond categorisation.

You also talk about beauty (episode 6: ‘Do You Think I’m Hot?’) on Planet Sex with Cara Delevingne. How do you think we traditionally see beauty?

So often beauty is marketed to us as a very narrow one-dimensional thing, which is large European eyes, skinny, hairless and traditionally gendered. But what I think is really beautiful is that with the rise of social media, people are pushing back against those harmful advertisements which make us feel like we have to change who we are fundamentally in order to be seen as valid or beautiful. People are popularising a new definition of beauty.

What would your advice be to people who may be watching this programme and struggling with gender or beauty norms?

Just to be gentle and compassionate to yourself because we keep on thinking that shame will change us and it doesn’t, it just stalls the process. A lot of my conversation with Cara on the programme was saying this to her. We grow up in societies and families that often invalidate us and make us feel like we’re woefully inadequate, or that we have something to prove and so of course we cling on to conformity because we think that that’s going to save us or protect us or give us love.

You’re going to get negative feedback, of course, but depersonalise it because nobody gets to tell you you’re a problem for just existing.

Did it surprise you when Cara, often described as one of the most beautiful women in the world, said she had insecurities?

Yeah, it surprised me when we were filming in the department store, I thought that as she’s a runway supermodel, she’s going to be able to really “own it”, and when she told me it still scares her, that was a really humbling moment for me.

Why do you think Cara is so admired in the LGBTQ+ community?

I just think it takes a lot of guts, especially in an industry where you’re someone else’s muse, to assert your own aesthetic identity and explore yourself. When other people have preconceived ideas of what you should be wearing and what you should be looking like, especially when you’re a publicly-facing person, it’s brave to express that you’re queer. And to question gender norms is often met with a lot of resentment and backlash and validation, so I think it’s a really vulnerable and important thing.

Do you feel hopeful for the future?

I think we’re experiencing both an improvement and an extreme backlash which is leading to some really draconian stuff including an outright crusade against trans and non-binary people. But alongside that we’re seeing such deep celebration, affirmation and diversity of especially Gen Z, who are just completely agnostic to so many traditions and norms that my generation was so deeply invested in.

I think it’ll get worse before it gets better. That’s the way that backlash works: people are really loud and vocal and critical and mean, but then they don’t last because at the end of the day, this is a message that resonates deeper than politics. “Be yourself” is one of the most foundationally loving things that there ever was in the world.