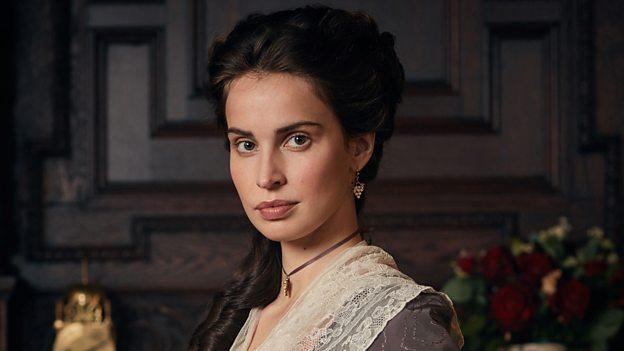 Heida Reed reveals that in the third series of Poldark, premiering on Sunday 11 June at 9.00pm on BBC One, the audience will see a darker side to her character, Elizabeth Warleggan.

“This series definitely sees Elizabeth getting slightly darker, in fact the cast and I joke about her crossing over to the dark side. Whilst she may never truly be on the same level as her husband, George Warleggan (Jack Farthing), she does go further than we are used to seeing.

“Elizabeth is certainly not a one-dimensional character, she constantly goes through ebbs and flows of life and she grows into a very different person to who she was in series one. That is part of the reason why I enjoy playing her so much and also why people don’t necessarily have a clear-cut opinion of her.

“I am so lucky and grateful to be able to go on a journey like this with a character. We cover over a decade in the story and you get to really see Elizabeth grow due to the consequences of her surroundings and of her decisions. You don’t always get that chance with a character so I never feel like I am stuck in the same place with her, she always goes somewhere new and she definitely keeps going in series three.”

Heida discloses where we find Elizabeth at the offset of the new series.

“We open on Elizabeth on horseback having lost control of her horse. She is heavily pregnant and the question is how far along is she? There was no way of telling back then. So she is up to a lot of strange activities, getting herself into questionable physical risks just in case the baby comes early she can blame it on the horse having bolted or having fallen down the stairs, she is covering her bases.”

Having recently married George Warleggan, perhaps more out of necessity than love, Heida reveals how their relationship fares this series.

“George and Elizabeth have that kind of ideal, traditional marriage agreement that was very popular at that time; it’s a very eligible match and that fact holds the marriage together. They both respect this kind of arrangement on the basis of it being sensible rather than romantic. So there is a lot of mutual respect and understanding there. Elizabeth is very much focused on trying to hide her biggest secret, which has an effect on her marriage.

“At the start of the series they are a united front but George’s actions towards other people soon start to bother Elizabeth, despite her not being as aware of it as the audience obviously are. When George brings Morwenna (Ellise Chappell) into the house as governess to her son Geoffrey Charles (Harry Marcus), Elizabeth finds it difficult to get used to.”

With George keen to put distance between Elizabeth and her son, Heida tells us about the relationship they share this series.

“Geoffrey Charles is a Poldark and is also the heir to the Trenwith estate and so he is very much in George’s way. He loves his Uncle Ross (Aidan Turner) very much which Elizabeth is fine with as she was a Poldark once herself. On the one hand she wants Geoffrey Charles to feel close to his family but on the other hand it would be easier if he didn’t.

“Having her new baby distracts her from her relationship with Geoffrey Charles a little and George’s manipulations in having Morwenna come to take care of him takes him further away from his mother so there is a strain on their relationship that starts to build and as he grows he becomes more inclined towards the Poldarks than to the Warleggans.”

As for her continuously tumultuous relationship with Ross, Heida reveals; ‘they are both beginning to move on.’

“Ross and Elizabeth have finished this chapter in their lives and have been able to let go of it since it all exploded. Obviously there could be a huge consequence but at this point Elizabeth is trying her best to ignore it and carry on with her life. There is still a feud between the Warleggans and the Poldarks and whilst Elizabeth, may not feel as strongly about it as George does she stands by her family like a good wife. However, although Elizabeth has sort of closed that book, there is still the Geoffrey Charles element which complicates things because Ross is his uncle and Geoffrey enjoys spending time with him.”

This series sees a big influx of new characters. Heida reveals how much she has enjoyed having so many new and talented actors join the cast this year.

“There is a new, young generation. We are no longer the only Poldark generation which is quite lovely, to have this young, fresh blood come in and take over these very romantic stories where have moved on to slightly more domestic, political or societal ones.

“In terms of cast they have been wonderful. Somehow on this show everyone that has been cast seems to be cut from a very similar cloth so we all get along very well and no one takes themselves too seriously. It is quite a serious drama so it is important to be able to make jokes and laugh in between and we certainly do that. I have made such amazing friends from working on Poldark; some of my closest friends now are people I met on the first series. It is so nice to have new people coming in and miraculously being as amazing as people and actors.”

Heida tells us what she thinks is key to Poldark’s success.

“Poldark is a story about fighting for what is right and for love and the real things in life we believe are worth fighting for. I don’t think it matters what period you set it in, that’s what is so nice. You watch something that happened hundreds of years ago and it makes you realise that people have always been fighting for and struggling with the same things.”