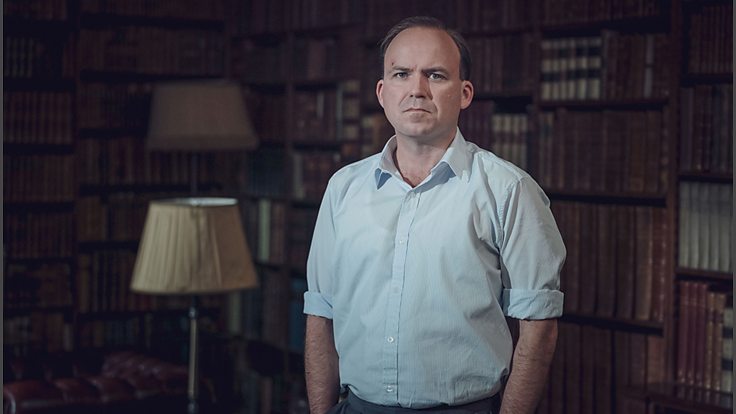 Tell us about Colin Jordan and what drew you to the role?

Colin Jordan was a fringe figure of British politics, but also a figurehead of the British far right. During the 1960s he had initially established the BNP with someone else, but they splintered off and became the National Socialist Movement, which in the programme, we find him the head of in 1962. He did eventually find himself falling from grace – if you can say that he was in a place of grace to start with – and I think he died around 2008 and continued his diatribe of hate until the end of his life.

How much research did you do into Colin Jordan to prepare for the role?

There are a couple of books around him and the movement that he was involved with. There are quite a few books about the far right in British politics in the 1960s as well. I think it always comes as a bit of a shock in 2021, that only seventeen years after World War II, to see people calling for the removal of Jewish people from Britain. What we see in contemporary far right politics to an extent is this notion that there is this shadowy cabal of Jewish figures operating a global conspiracy to keep down the Christian white man. And here was somebody who himself had fought in the war, and had gone to Cambridge, stirring up that level of hate so soon after the catastrophe of the Holocaust.

Colin Jordan was also a prolific writer himself. A lot of his writings were after the period we were looking at, but his general central tenets didn’t seem to change very much. He was very much against immigration and against the Jewish faith in general, particularly in Britain.

The language that he uses and the tropes towards the end, that he lazily adheres to, are so abhorrent. In some ways, they created too much of a barrier between me as an actor and this character. So, I had to leave it alone after a while. Because you do essentially have to believe in why he’s doing this and work out a system of belief that fits with this man and where it comes from and what he’s hoping that it might lead to. In the moment during the take, you have to commit to it and believe in it, so the more I read about it, the more distanced and judgemental I found myself becoming of him – as I think most people would be if they’d read anything he’s written, so I did eventually have to say, “What are the central facts of this man’s life?” If I’m going to step into his shoes, I have to do so with the same level of conviction and belief that he had in what he said.

Was this a piece of British history that you were aware of before taking the role?

I knew about the far right in Britain – Oswald Mosley and Enoch Powell. And of course, one knows about the history of black immigration in this country and the barriers and prejudices they faced in the 50s and 60s. I didn’t know about Colin Jordan and I didn’t know of the National Socialist Movement. I didn’t know that they had managed to gain so much traction, or at least publicity, by similar kinds of stunts: the ability to exploit the shock factor of what they were saying to gain themselves some traction and some column inches.

What drew you to Ridley Road?

I know Sarah Solemani and I was very keen to see her quality of writing. I like her and the way she is, and I thought she would bring something quite fresh, interesting and dynamic to the adaptation. And, through the last four years, the language of hate and prejudice and the increased bifurcation of society – you want to see where in history this had come previously and how we managed to get through it.

Also, sometimes, we can consider these problems no longer of relevance to ourselves, and that we’ve worked through it. We think we wouldn’t be a country who has prejudice against either Jewish people or immigration from other countries. But obviously, we know, especially in recent years, that this is not the case. I guess there’s something about these people trying to resist a malignant force to protect themselves, but also to protect the nature of democracy and the nature of our country. Is there something we can take from that, in terms of how we try to resist repugnance entering this country?

Do you think this show is relevant today?

Yes, I don’t think that this show is being made just as a history piece about the 1960s. It’s obviously being made because there is something to be said about contemporary British society. And also, it is saying that whilst it may not be a majority opinion, these repugnant arguments still exist, even in being repeated or given publicity to infect the discourse and politics in general, and we must continue to resist that.

You worked with RED Production Company before, what is it about their productions that you enjoy being a part of?

I’ve done The Second Coming and Years & Years which were Russell [T Davies]’s shows. I was led by the writing on those and the really bold visions of contemporary society, which stretched forward in the case of Years & Years and stretched in terms of an idea that was made real in terms of The Second Coming. With Sarah’s writing as well, I’ve been lucky with RED with fantastic scripts with a sense of talking about today. Years & Years talked about today by looking at twenty years in the future and Sarah looks at today through looking at sixty years in the past. What they’re all trying to do is reflect the life that we lead contemporaneously today.

Do you have memorable moments on Ridley Road that you can share with us?

When we were filming up in Yorkshire for a week, they had a little wild swimming lake up in the grounds of the stately home. So before filming I’d have a lovely plunge at about 7am and then drive back in my car, making sure it was as hot as possible driving back to my room.

Ridley Road will take viewers back to the swinging 60s. Did you enjoy the costumes you were provided with and the sets that the team designed to recreate those times?

We had a few days where we were outside in the streets, particularly the Ridley Road march that we were filming. The production design is fantastic, you do genuinely feel like you’re thrust into a 60s marketplace. They’ve done such amazing work, obviously using Manchester to look like London, but also all the contemporary odds and sods that you see around a busy shopping street. We were filming in Manchester… how they managed to conceal everything modern while at the same time redoing all the shop fronts is always exciting to be a part of.

How have you found working with the younger cast members, Tom Varey and Agnes O’Casey?

It’s been abominable. I hate the young. I hate their hope and I hate their dreams and I’ve tried to crush them as much as possible. No, I mean the nice thing about acting on any kind of project is that you’re working with a whole wide range of people and ages, at different stages of people’s careers. You get to work and get to know people intensely for a couple of months and then you never have to see them again. No, I mean obviously for Agnes, this is such an enormous moment in her life, being her first ever job out of drama school. To be essentially in every scene and being the whole centrepiece for the show is huge. I’ve tried to make life as difficult as possible for her and to remind her that it’s not always like this and some of us had to struggle to get any kind of career going! And, as happy as she is, we all hate her for it.

Will the series have an international appeal?

Sadly, the issues that it covers aren’t localised in England. We have certainly seen over the last four to five years a growth towards a resurgence of nationalistic spirit, some people might call it pride. That seems to be prioritising the majority race within a country at the exclusion and quite often oppression of minorities. Whilst that probably has always been the case to some extent, the volume in which those problems have been turned up and the amount of attention that chatter seems to get means that it’s a global issue that is just as easily reflected in a localised and historical perspective like this. I don’t think it’s just a show about London in the 1960s.

What do you hope audiences take away from the series?

That sense that the tides of justice and the competing tides of prejudice and hate are constantly moving in waves. And that the waves of prejudice only get to cover the shore if there’s nothing holding it back. Also, the call to rise up, to suggest that, in unifying ourselves both across countries and the world, to say “no”, we’re going to push back against this rising of quite often, inept populism. Because it has no basis in fact, only basis in a convoluted twisted pulling of what people think is the heart. That it’s time and it has been time before to stand up for those things.

Why should people watch Ridley Road?

Because it’s a fast paced, moving exploration of British past, with a keen eye on contemporary Britain and its politics; with a great love story in the centre and a corner of British politics which may not be the prettiest, but quite often until now, has remained unexplored.