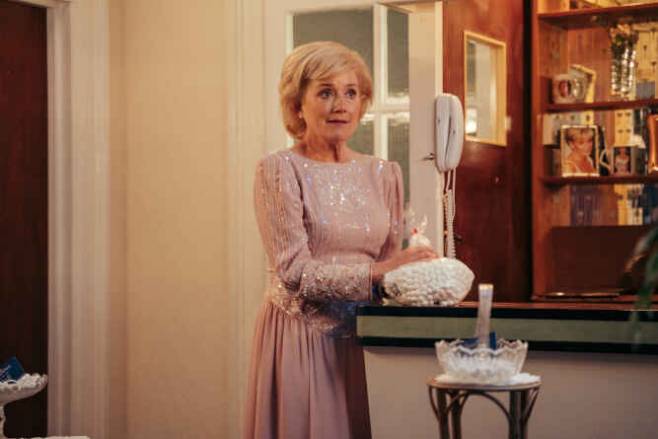 Why do you think the first series was such a success?

I think it might have been popular because a lot of us love absurd comedy. Silly, ridiculous sitcoms are a great British tradition. There’s a real appetite for daft. There’s a lot of dark and brilliant things being made, but there’s room for everything, and the juxtaposition of all that just goes to makes life more delicious. It’s wonderful that there’s so much creativity at the moment. Things being built and made again out of all the broken. I know I feel very comfortable in the world of absurdity. I feel a belonging.

Crucial is the word. He’s such an artist. Like a painter, a real auteur. He’s created a very visually specific world which is slightly off -kilter. The daftness of the comedy is combined with Michael’s artistic eye, and it’s lovely to be part of that recipe.

Talk us through you character

Jeannie desperately wanted to be a mum I think and that just didn’t happen. All of that love and energy and playfulness is still there waiting to be used. For all that, her relationship with Derek is cranky. But they do love each other, and it works in its own Heath Robinson way. They have a shared eccentricity – at least they have found each other. Derek can be awful to Jeannie and very controlling sometimes, a man born from a particular era where allegedly men really do know best. Jeannie has navigated her way through that kindly, but I think its definitely added to her dimension of dottiness!

What do you think the tone of Sandylands is?

There is a real theatricality to it. I really like the fact that it’s not realism – we’ve all had heaps of realism up to the eyeballs. So, it’s healing to have a laugh about something that stretches reality. I find that medically very helpful physically and mentally.

Were you happy to be back in Weston -super -Mare?

Very. The people there are so welcoming. Film crews can be very invasive, and people can sometimes be irritated by them, which I completely understand. They’re thinking, “not a film crew! I’m not allowed to go down my own street. I have to wait here while they take an age to do their pretending.” But they weren’t like that at all in Weston -super -Mare. They were really pleased to have us back. It was lovely and we were very grateful.

The seaside works very well as a backdrop to this comedy, doesn’t it?

I think very much so. The seaside setting’s perfect, I think. As an island race, we tend to love the seaside. We were all brought up on it to a degree. There’s something uniquely classless about it. I think you’d be hard pressed to find anyone in Britain who hasn’t gone to the seaside as a child. We all remember the sand between our toes, ice creams on the beach, dodgy swimwear. Chips and snogs in bus shelters.

Does the seaside have a therapeutic effect as well?

I think it does. It’s the geographical place I most sought out during the bizarre period of lockdown actually. I think being by water is hugely helpful because it’s a natural force that reminds us that everything just somehow keeps on going. The moon and the tides. I’m hoping one of the positive changes that will come out of the pandemic is that the British seaside will have an influx of visitors because they have been sorely needed. Cheap international travel has bitten us hard. In more ways than one. It’s so good to be reminded that we are surrounded by such a wealth of glorious coastline in this country. I’d love to see that celebrated more. The celebration of the seaside is one of the joys of Sandylands .

Are you hoping for a third series?

Totally. That would be fabulous. There are so many ridiculous possibilities that they’ve sown into the soil, or should I say sand of the piece, just waiting to flourish.

I simply loved it. He is just a funny, funny, funny guy. He’s got funny bones. He makes me laugh all the time. If I’m honest, I was a bit nervous beforehand. I was a huge fan, and you never know if you’re going to get on. But I immediately felt very comfortable with him. It’s really inspiring to work with great people like that. You learn so much from them. Hopefully some of it will rub off.

I would work with David again at the drop of a hat. I could always sell popcorn at one of his rides in the World of David Walliams at Alton Towers – just to keep my hand in.