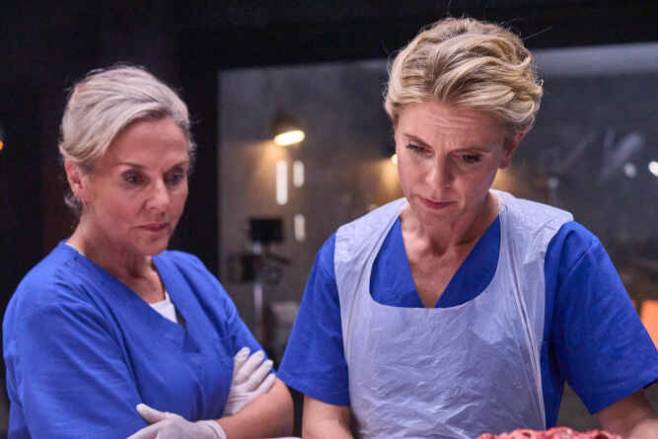 What was Amanda’s reaction when you pitched the return of Sam Ryan to her?

We didn’t really know how much she’d want to do. We thought that maybe she’d just come in and do a couple of episodes. But when we decided to tell one story over six episodes, she said, “Oh yes, I’d love to do all of that.” Obviously, it’s an enormous delight for the audience and the response to her brief return at the end of series 24, when she asked the Lyell for help, was great, so we thought, “Okay, yes, the audience is up for this.” Hopefully, it doesn’t feel regressive. It feels like a proper evolution. The two ends of the series meet to tell us a story about the basis of pathology and forensic science, because that’s what’s challenged in this series.

How did fans respond when they heard Sam was coming back?

They were just so excited. People have been so committed to Sam Ryan over the years. There are a lot of super fans who know every episode, much better than Nick Lambon, the producer or I do because they study them in depth. I’ve got a film student doing their final year university dissertation on Silent Witness who sent me a series of questions the other day. One of the things over the history of the show is that it has inspired a lot of female scientists. Lots of people on Twitter say, “This is me. Silent Witness prompted me to want to follow a career in science.” They cite Sam or Nikki as the reason why they first wanted to be scientists. That’s incredibly valuable. It’s fantastic to see that the show can have a bonus like that.

Why has Silent Witness been so successful for so long?

One of the reasons why the show has worked so well is because it has had to keep up with the development of technology. There have been huge shifts in forensic science since 1996. So many of our stories now are based around the internet, CCTV, the proliferation of DNA databases – things that weren’t there when the show began. I think that’s been important to the success of Silent Witness. The other thing is the show’s defining philosophy is how we take care of people after death, they’re not just an object on a slab. We are invited to meet the remaining family to discover more about the dead person, I think there’s a big dignity element to this show. It works in our favour to develop stories where the audience inevitably care, that’s why people stay. Initially, they come for the crime, but it’s caring about the characters that makes them really commit to the show.

The show’s popularity is also due to its terrific female leads, isn’t it?

Absolutely. Everyone has different favourites. Nikki has been a great fan favourite for a long period of time, and Sam and Clarissa have been hugely popular as well. I think having those strong women leading stories has been important for the maintenance of the show’s success. Also, it’s not just a show that’s been around for 25 years, it’s a show that attracts consistently high audiences of 7 and 8 million viewers. That’s a great volume of people for a show that has been around all this time.

Do you think the show can last for another quarter of a century?

Absolutely. It will need to keep reinventing itself, but I think the show will survive for a very long time indeed.