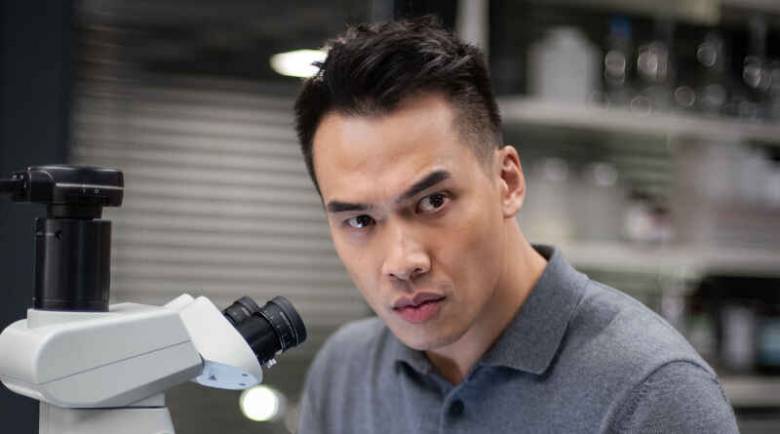 What did it feel like to join Silent Witness?

Exciting and daunting in the beginning because you’re joining such an established BBC show, but I was made to feel really at ease by Emilia and David and the crew.

I was lucky, because we had a pre-screen day which was like a rehearsal to help work out Covid protocols, which is so rare. It was nice to go on set and have a rehearsal with the director and cast and I was able to watch and listen and ask lots of questions.

What can you tell viewers about your character Dr Adam Yuen and how he fits into the team?

I would describe Adam as a typical Millennial he wants things now, he wants it fast and jumps in with both feet. He’s very direct and forthright and treads on everyone’s toes in the beginning because he wants to impress and do a great job.

But his need to impress his colleagues sets him on the wrong path. There are some nice moments of comedy as he’s trying to find himself in the team dynamic.

How have you adapted to learning all the scientific terminology?

Lots of repetition and researching lines. We had advisors on set helping with the terminology. Remembering some of the words though! There was one line that really stumped me, I just couldn’t say it and it will always haunt me. Not forgetting you have to know the lines and look like you know what you’re doing with a scalpel.

Have you learnt any tricks of the trade from Emilia and David?

How to sustain energy all day, particularly when you’re filming so many scenes that are dialogue-heavy, it’s quite intense – David’s trick is to disappear at about 11.00 am to get a chocolate and biscuit fix! Also watching Emilia and David while filming and just seeing their technique in front of the camera

What is the stand-out moments for you, are there any episodes or themes that had an impact?

One of the episodes features Jack’s niece Cara played by Rhiannon Jones, who is deaf. I got to work with a British Sign Language (BSL) coach to learn sign language, which was daunting to learn, one of my biggest challenges and one of my highlights.

It was such a powerful moment to be able to communicate with Rhiannon through sign language on screen – that really stood out for me.