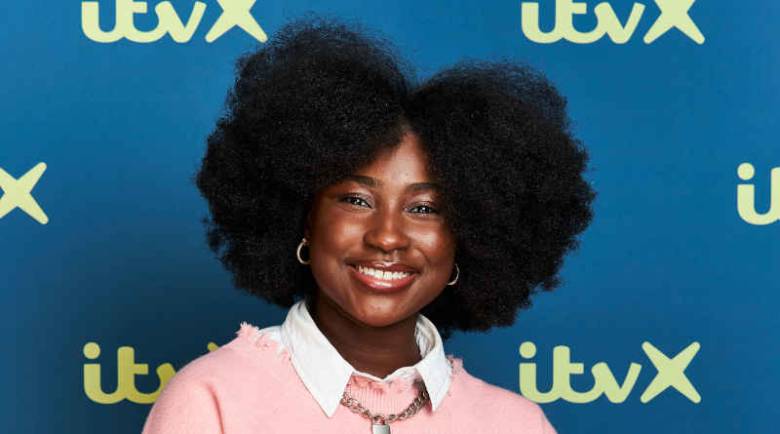 When you first read Neve what was it about the character that intrigued you?

She’s rebellious. That intrigued me the most. She’s a black teenage girl from an African household who has a slight ‘I really don’t care’ attitude. She’s a party animal and it’s very rare you get all that onscreen or that you even hear about that in person unless you are really good friends with them, especially being Nigerian from an African household. She’s a lot of fun. I like her.

Could it help parents to understand their teenagers better?

I think it’s an eye opener for them. It may daunt some parents and families, but I think it’s so important to understand that life is very different to how it was. We’re exposed to so much more now with the internet and social media. I think it should also open a space for families to speak to their kids rather than rebuking them or constantly feeling like they have to put up barriers to protect them.

When we first meet Neve she is funny, she’s bright, she’s got the highest grades in WGC, but there are other pressures bubbling under, aren’t there?

She has a load of pressures. It’s funny because despite her having good grades I’ve noticed that it’s not something that she says out loud. It’s not something that is an achievement for her. I think it comes from the sense that she just likes being known as the party girl who’s a bit of fun. School is neither here nor there for Neve despite her being really smart. When people cheer her on for her good grades she goes into her shell, like she’s embarrassed. I think with the expectations at home because her sister is such a huge role model who has moved to London and is successful it’s like Neve has all those pressures to live up to.

How does Neve fit into the friendship group with Jonny, Louis, Zia and Regan?

Out of the six, she is like the mother hen despite her constantly being the one who is up for a drink or a party. She keeps everybody in check. It just comes from a place of love and care. You genuinely do see that through the episodes, especially with Jonny and Louis. She mothers them and they are like her little brothers. She loves to help and support her friends or anybody that she can, which I think is quite nice.

Neve and Jonny have a dance routine to their favourite 2014 song. How was that to film?

Yeah, that was a lot of fun. We actually rehearsed that in the first week of knowing each other. It was a real icebreaker! When we shot it, it was like watching a live show for the whole crew, because no one else had seen it before. That whole scene wasn’t acting. It was just raw emotion.

How would you say yours and Neve’s life experiences are similar?

Like Neve, I went through an identity crisis where I yearned to be accepted in society and the only way I thought that was possible was if I had long, straight hair. I’ll never forget when Willow Smith came out with Whip My Hair. I remember sitting crying because I felt as though my hair didn’t whip like it did in the music video. I was really, really upset about that. So, I could relate to Neve’s identity crisis because of my own experiences.

What’s Neve’s reaction to Mei when she first appears on the scene?

I think she’s a bit on edge about Mei. Being the only girl in the friendship group, in terms of the trio with Jonny and Louis, to have someone else come in and literally make you be disregarded by your best friend it’s a bit like, ‘Um, I’m not sure who you are but I don’t know if I like you’ kind of vibe. So, I think Neve immediately has her guard up. Mei has come in very confident, that’s what Neve does, so for Mei to do that, she is stepping on toes.

Callina says the pair of you really bonded. What brought you together?

Yeah, the irony of it all is we hate each other on screen apparently but in person we are the best of friends. We’ve only known each other for a few months but we have so much in common, from our favourite hobby being just to go out and eat in restaurants to having the same music taste. We are always together. There are scenes we have done where we have had to be absolutely horrible to each other and people are like, ‘Are you ok? Do we need to have a check in?’ And we’re like, ‘We’re good.’ She is like my bestie.

Mei steals Neve’s phone at one point. How long could you cope without yours?

Not long. It’s quite sad to say that because there was a life before phones. I unfortunately was born into the era where phones are a thing so to be without it is quite daunting. When Neve loses her phone, I can understand her manic state. You just feel like you’re missing out. It’s that FOMO effect.

In episode four we learn more about Neve’s family life. Did you get to collaborate with writerYemi Oyefuwa on that?

We had loads of discussions about little things like hair situations. Originally, I was meant to have my natural hair throughout the entire episode and then they developed this whole episode where Neve’s not really in love with her hair. She just wears braids. Then towards the end she finds herself and wants to embrace herself, which is really nice. With Yemi coming from an African background as well we definitely clicked and bonded so when I read episode four with all the little jokes and innuendos, I genuinely got a little spooked because this is my life. It’s basically what I grew up on.

How would you describe Neve and her sister Timmi’s relationship?

It’s a bit neither here nor there when you first meet them. Their interactions are like Neve saying, ‘I don’t need a babysitter. Why is she here?’, but I think that when their parents go away (to Lagos) for a while it makes them bond. I think that was important because Timmi wasn’t just an older sister, she became a role model that Neve genuinely wanted to look up to because she wasn’t living behind a lie. She was being truthful, and it was real. You tell your parents what they want to hear but with your sibling you tell them the truth. I feel that’s what happens between them.

How did you get into acting?

I studied musical theatre at Brit School for sixth form, which was a lot of fun. On top of that I was part of the Youth Theatre at Stratford East, and they hosted this event called Monologue Slam at the time. I remember I was like I don’t want to do this, performing a monologue in front of industry professionals. It was daunting to me, but I think it was a blessing in disguise because my mentor at the time convinced me to do it. I did it and I got my agent. It’s been a beautiful rollercoaster ever since.

Have you enjoyed working with costume designer Cecile?

Oh yeah. 100%. When we first met, we had a mood board and we discussed everything that Neve did. So, it’s nice to see it all pieced together and how they’ve taken the narrative of Tell Me Everything and tried to incorporate it with previous shows and what the trends are today. I feel like that’s going to play a massive role when this comes out. Everyone is going to be like, ‘Oh my god, hair and make up and costumes!’

What have you learned about yourself playing Neve?

One thing I have definitely learned about myself is that I’ve matured. A lot. I’m really happy to say that. I was a Neve, or I was falling down the road of becoming a Neve. Some of the things in the script I’m like, ‘that’s a very dumb decision, Neve. That’s not great.’ But it’s not me so that’s fine!

What have been the most emotionally challenging scenes to film?

I think when Timmi has to come and pick up Neve after the rave. It was a beautiful scene, but it took a lot. I think it was just an eye opener, especially for myself how skin colour can affect so much despite the situation you’re in. I remember on set it was like this is a really big scene. I can’t wait for everyone to see it because I think it played out really well.

What are you most proud of with TME?

The rawness of it. The stories we are telling with identity crisis and sexuality and mental health. I think all of that is so important. When this comes out there is a story for everyone, which isn’t always the case. But with this show I think that is what we’ve done.