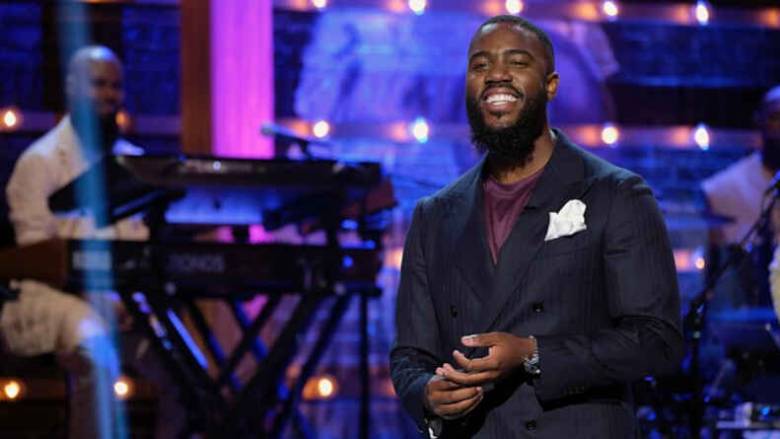 How would you describe That’s My Jam? What is the concept of the series?

I’d like to describe it as the perfect hybrid of musical challenges with game show trivia, all moulded into one show, which is always fun, surprising, and totally energetic.

What does it mean to you to have That’s My Jam launch in a primetime slot on BBC One?

All the greats of British TV have been in that slot. British culture is weekend television. It’s a big deal. It’s the time when people clock off for the week, this is their weekend and they’re letting you entertain them a little bit. So having that primetime slot on BBC One is a massive deal and the fact that BBC and Universal trusted me and wanted me to be on board, I can’t begin to explain how much that means.

But then you’re like ok, now we just need to make the best show possible. Let’s make something really amazing for our audience. We’ve all worked really hard to give them the best possible show we can.

What makes That’s My Jam so unique?

It’s such a fun show. I guess the unique point is that people at home can really play along too, and you’ll see some of your favourite celebrities do things you’ve never seen before. They’re putting their musical knowledge to the test but also pushing their performance abilities.

The games on That’s My Jam are so simple and yet feel so big. We have really fun games like Slay It Don’t Spray It, which has our celebrity teams go up against each other as they try to guess the lyrics of a song – or be sprayed in the face with water.

What do you think audiences will take from watching That’s My Jam?

I think the show is really cool because it’s all about music – and the music is timeless. A new generation will discover the old school and at the same time, the old school discovering the new school. I mean that’s the coolest thing – that people can play along at home with friends and family and test their musical knowledge together.

It’s complete escapism at a time when we probably need it the most.

What were your favourite That’s My Jam games?

Probably Wheel of Impossible Karaoke – it really kicks off the show. And I think there are some performances in the series that are absolutely mind blowing. The cool thing about this show is that you have actual musicians playing these games. They are having fun while playing these performance games and that allows audiences at home get to see a whole new side to the stars.

The celebrity teams are pretty epic in your series. Who can people look forward to seeing on the show? What kind of teams and celebrities have we got?

Oh we’ve got some amazing celebrities, man. We’ve got names like Donny Osmond on the show, who’s one of the coolest guys. You’ve got other massive US stars like Jason Derulo on the show, but then you have people from the UK like Alesha Dixon and Becky Hill.

There’s a great range of people – some of my favourites were Chrishell and Mary from Selling Sunset. I discovered Selling Sunset by accident, and I love it, so it was fantastic meeting them as well. Salt N Pepa, oh my gosh! Salt N Pepa on the show and they were my favourite guests! I’m sorry to anyone else, but I got to meet Salt N Pepa and they were so cool and so funny! The intergenerational nature of That’s My Jam means it doesn’t exclude anyone. There’s something for everyone.

The games cross musical genres as well, which makes it feel even more inclusive. I think people are gonna be surprised by Tom Grennan because we do a little musical thing with a keyboard on the floor and he makes up a song – it’s incredible.

The show is based on Jimmy Fallon’s That’s My Jam. How does it feel for the baton to be passed on from him to host this UK version?

It’s a huge honour. This is his project, so it’s amazing – the fact that he’s passed the baton is incredible, but I think the coolest thing is that he was really encouraging and told me to ‘do it your own way’. He said we have the American version and so we want the UK one to be the UK one. We don’t want you to replicate what we do. That felt really great to hear, especially from him.

And just meeting him, talking to him and knowing what the show’s about was really cool. To have someone like Jimmy, who has been in the game for such a long time, say they respect what you do and say ‘do it your way man! I wanna see how you do it’ is incredible.

How did you make your mark on your version of the show?

Well, I’m a big fan of music myself. So, even things like the opening music I come out to, I wanted to be involved in that. I talked to the band, you know we’ve got Adam Blackstone who’ve worked with Justin Timberlake and Dr. Dre to name a few. So I was telling them ‘When I come out, I wanna come out to music and get the crowd involved’. Adam and his band were so brilliant to work with. I’m a big fan of audience interaction as well – I think it’s because I come from a stand-up background so that’s the kind of ingredient that I wanted to add into my version. Doing the show, how we can get the crowd involved and make people at home feel like they’re part of the show. I always try to do that.

I was also really lucky because I got to go out and watch the US series being filmed and got to record a pilot in LA as well. So I had a nice feel for the show by the time the series shoot came around and enough time to think about how I can add to the series in my own way. The whole team worked so hard to make something really special. And the coolest thing is I’ve got one of my own games in the show, which is called Take on Mo. I’m kinda gassed and that’s kinda sick.

Are there any funny moments from filming that stand out for you?

The funniest moment was Salt N Pepa playing Catch the Mic. I couldn’t stop laughing. Salt N Pepa are so nice and they’re so cool. They really remind me of my family, they feel like two of my aunties. But their competitiveness was hilarious and they’re such good sports – I think people are really going to enjoy seeing how competitive they are. Jason Derulo and Becky Hill as well – loads of funny moments with those two as well. But everyone just came to play which makes all the difference, I think the audience is going to love every second.

What was it like meeting / working with Jimmy? Did you have any pinch-me moments whilst you were out in LA?

I think my Pinch Me moment was honestly walking out to the audience for the first time. We all worked so long to make this show a possibility with the writing and the incredible production staff – and at that moment, when I got to walk out say ‘Hey, That’s My Jam!’… wow. It was a full circle moment because it was literally a year from when I filmed the pilot to then filming the series.

And yeah, me and Jimmy. He’s really cool, we got to film some little fun bits together. He’s a great improviser, and I love improvising. He really gave me his time as well – I think that’s what I really appreciated because he’s a really busy man. Some of the stories he was telling me, he was like ‘I was out for dinner the other night man and Keanu Reeves sent me a drink, and I sent him one back, and it became this funny thing we kept doing…’ And I’m like, man is busting jokes with Neo from The Matrix you know! And then he says ‘Yeah, I’ve got this new song with Dolly Parton’, I was like ‘rah, that’s Jolene! That’s so sick!’. But that’s what’s amazing right, that’s his world… And you know, I have a few people who are celebs that I can call friends, but to drop names like Dolly Parton and Keanu Reeves, that’s just different.

I wanna say I’m 3 or 4 years old, and my mum is playing reggae, which she played on a Sunday while she cooked. So she’d be soaking the peas from the night before, and she’s just playing out real revival tunes. Gregory Isaacs, Bob Marley, Peter Tosh, and Sanchez – my mum would be playing all that stuff. And then mum would start playing the Motown classics. Sunday would be cooking day, but we had to do chores also so, you know, trying to do chores to Ain’t No Mountain High… It didn’t really feel all that fun when you’re having to clean skirting boards man.

What was the first gig you ever went to?

I’m not sure about my first one, but probably my favourite gig of all time was the Watch the Throne tour with Jay Z and Kanye West. That was just absolutely phenomenal, I was right at the front. Like I’m talking right at the front to the point where Jay Z was saluting me and my friends. For me it was one of the best tours I’ve ever seen – the energy, the songs, I feel like I could go on forever but it’s probably up there. One of my favourites that I’ve ever been to.

Another one was going to see Beyonce. Just after she did the Super Bowl, she announced the tour. That show was so sick, and people don’t believe me when I tell them this, but I was wearing a red hoodie that day, and I sat at level one, right bang in the middle, and she was like ‘Yo you over there! Everybody put your hands up!’ She pointed at me. I swear to you, she pointed at me. And everyone around us put their hands up and then one girl behind me went ‘Oh my god, she’s pointing at me’ I’m like ‘No no no. That is me. I’m in a bright red hoodie.’ So that’s got to be my favourite gig – when Beyonce pointed at me.

That’s a big one! You are also clearly part of the Beyhive which is good to know.

I think Beyonce is sensational. I’ve seen her, like, three times. She’s such a show woman of a performer, like Diana Ross, Tina Turner vibes. She’s wicked man. I’m definitely part of the Beyhive a hundred percent.

What was the first single/album you ever bought?

I think the first single might be MC Hammer’s Can’t Touch This and I got that on a cassette with some pocket money. And then the first album might have been Dr. Dre’s 2001 you know. My sisters used to listen to a lot of it, but I remember being like “Mum can I buy this one” and she was like “Yeah cool, go on then” but she didn’t really know the music, so I got away with it.

Who would you consider your musical hero?

My musical hero has gotta probably be Bob Marley. The man made effortless, timeless music, always stood for a lot and he’s just, you know, one of those musicians that just stands the tests of time and crosses so many different generations.