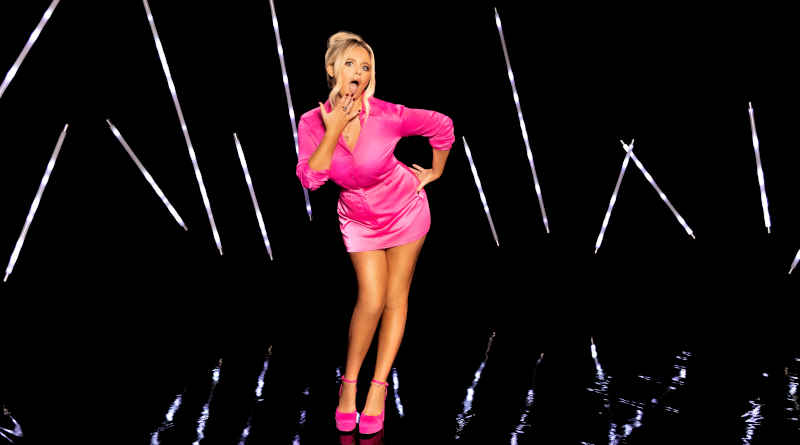 What can viewers expect from the new series?

There are new faces, new impressions and new observations. We’ve got some celebrities popping up which is really fun. I think this series is stronger than ever and I’m so proud of it. It just feels like it’s growing and growing. I look back to series one and it’s growing with me. This time it’s looking at similar topics to series one and two but it’s very much looking at those topics as a woman in her thirties. The earlier series were about approaching your thirties and what that was like and now I’m in my thirties, it’s how that feels. It’s definitely more fun, stronger, and ruder than ever.

Do you feel that your confidence has grown each series and this has made this series stronger or is it harder because there’s added pressure due to the success of the series?

It’s such a luxurious way to work as a performer. I compare it to being a child and getting a new colouring book for the first time. You can just be creative and colour the things in whatever you want. It’s so exciting and I’m so privileged to be in this position to be able to do this.

It’s crazy to think that I’ve been doing this for three years. I definitely feel more confident and I have to trust in my ability as a writer and a performer. The more series I get under my belt the more I do that. I feel like a different person to what I felt like when we did the first series. I’m so immersed in the whole process and I’ve made sure that I’ve been there from start to finish through every bit of the process. It’s so fun, myself and the writers sit around and talk about all of the silly things I’ve done in my life and turn them into sketches.

It’s such a fun way to work I’m so privileged to be able to do it. I love that people keep giving me this chance. Stand-up was such a new thing for me when I first started out and I really appreciate that people are allowing me to just grow and get better with that. It’s definitely a skill I’m still learning, it’s not perfect and it’s something I need to continue to work at which is totally fine and to be expected. I’m new to it but I’m dedicated and it’s something that I’m enjoying having the chance to learn.

Do you still get nervous when you do the stand up?

I really do. It’s not as nerve wracking as the live tours because it’s TV and if you make a mistake you can go back and correct it. What’s so funny is when I’m on tour I sometimes forget, I make a mistake and go back and say the line again! I’m like, ‘Oh no, I can’t do that!’

It’s fun, we film the stand up element over three days, two shows a night. It’s jam-packed. I have all my family and friends there. What a way to be able to show off in front of your family and mates. It’s showing off everything that I’ve been working hard on over the last few months and those Clapham Grand nights are really special, they are nights I’ll never forget in my life and career. They really bring the series altogether and I’m so lucky I get to do that.

You draw on your personal experiences. Do your friends and family worry that if they tell you a funny story it might end up in the show?

Ha! They all ask to be in it but when it gets to the Clapham Grand night and it’s the first time they are seeing the show and I mention them they are like, ‘Why did you tell everyone that? My nan’s are going to see that.’ I warn my friends to be careful what they wish for because their embarrassing story might just end up in the show!

One of the topics in this series is Rules To Live by, do you have any that you can share?

I’m a very live and let live person. I think if you are a good person and you are kind and do your best in life, I don’t mean in your career necessarily, but just doing your best at being a good person. I truly believe if you are a good person you can go to bed at night knowing that you are doing the best in life. There are no right or wrong ways to do things, like meeting a partner, settling down, having children. There’s no order to anything. I think society can sometimes make us believe there are those things.

I try to show people to celebrate your flaws. I like to think that I’m open and honest about my flaws and I do everything I can to show people that it’s ok not to be perfect. We live in a world now where everyone is striving for perfection and everyone compares lives, especially in this industry, everyone is constantly looking behind them. I believe you should just focus on what you’re doing, be a good person, be nice and you’ll have a nicer day.

Are you proud of the series and how well it has done?

I feel so proud. I’m not very good at complimenting myself but I’m definitely proud. There are always going to be people out there who try to pull you down. Especially being a woman in comedy and looking like me, blonde, big boobs, eyelashes and fake tan. People often say, ‘Hang on, YOU want to write jokes?’ I’m constantly battling that attitude and I continue to try and break that down. I’m proud of what I do and I’m so lucky that I get to do it, the second I stop having fun with something I’ll stop doing it but at the moment I’m having so much fun. There are difficult days of course but I’m having so much fun. So for now I’m very proud and I’m going to keep doing it for as long as people will let me.

Your comedy is so relatable for both women and men. Have you found that men who come along to your shows give an invaluable insight to women?

When I’m on tour my main target audience is couples who come and watch it together. It’s often a bloke who’s either brought tickets for his girlfriend for a birthday or his girlfriend has dragged him along. They come a bit reluctantly but they always end up enjoying it and I think that’s why. I think the women get out of it what they want, in that they can relate and go, ‘That’s so me’, but the men love it because they go, ‘That is so what she’s like!’ There definitely is something for the boys in my shows and I really try to do that. I love for men to come along and be surprised by how much they enjoy it.

Will we get to see more impressions? Who will feature in the new series?

There are definitely new ones, we’ve got the GC and Holly Willoughby coming back. The new ones are Adele, Billie Ellish, Olivia Colman and Lady Gaga. It’s going to be interesting because I’ve never done these ones before unless it’s at home with my mates. It’s not about sounding exactly like them, I just love performing and I love picking up on little mannerisms of women I admire. Who doesn’t want to dress up as Lady Gaga? It’s just fun and tongue in cheek, I hope people enjoy it. I’ll just keep doing it for as long as people love the entertainment of it.

Why those particular women?

I’m just a huge fan of them. I have this dream that Lady Gaga is going to see it one day and send me an email to say that she wants to be friends with me and I’ll be off to Beverly Hills and we can live happily ever after. I love these women, they’re strong, powerful, amazing women. They’ve all done different things in their own fields and they’re trial blazing women. I’m just a huge fan of women who are like that. I only ever do impressions of people I admire.

Are you working with the same writing team and do you feel that the comedy and writing has improved as you’ve worked together for a while now?

Yes, fundamentally the team is the same and that’s what makes it so lovely, we’re like a family now. I get the lovely writing team who are there in the beginning, when I film the sketches I’ve got the same crew, the same director. It’s definitely got this family vibe to it and we all know each other so well. It’s such an intense time to spend with people. I love working with nice people and I like working with new talents. I like good, nice people who like having fun and having a laugh. That’s the most important thing for me, getting along.

Yes I’ve created a character called Lisa and she’s a HR person who works at the ITV HR department. She’s not based on anyone I know, this is just a character I’ve made up. She is basically telling off key ITV talent. We’ve got Christine Lampard coming in to talk about her use of the communal kitchen. I’ve got Ruth Langsford coming in, she’s been getting up to no good with the Loose Women girls and I’m having to tell her off for that. Rylan’s coming in, because he’s always up to no good. I’m telling them off for stuff you’d never expect them to do!

Do you have a favourite sketch from this series?

There are so many. There is a flash mob sketch where a marriage proposal goes horribly wrong. That was one of my favourites because we had lots of professional dancers and it was a lovely day! I loved doing the ITV HR because I love Christine, Ruth and Rylan and they were so good to agree to take part. I also got to marry Duncan James which was a lot of fun. Also a shout out to Amy Gledhill one of the writer’s and actors who appears in most of the sketches. She’s one of my favourite people on earth. She was nominated for two awards at Edinburgh. I was so proud of my Emily Atack show team as there were lots of the team who were nominated for awards at Edinburgh this year.